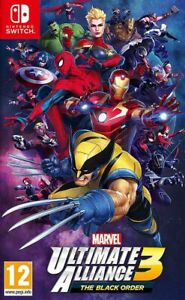 Hope this helps someone out for Christmas

The MARVEL ULTIMATE ALLIANCE series returns for the first time in 10 years – with a new action RPG – exclusively on Nintendo Switch! Assemble your ultimate team of Marvel Super Heroes from a huge cast including the Avengers, the Guardians of the Galaxy, the X-Men, and more! Team up with friends to prevent galactic devastation at the hands of the mad cosmic tyrant Thanos and his ruthless warmasters, The Black Order.

In this new storyline, heroes and villains unite in a race across the Marvel Universe to find the Infinity Stones before Thanos and The Black Order use them to unleash cosmic chaos. From Avengers Tower to the X-Mansion and beyond, every stop on the dangerous quest to thwart Thanos results in unexpected collisions of fan-favourite characters and iconic locations. Get closer to the action by shifting the view to an over-the-shoulder "Heroic Camera" perspective – a series first that offers a more immersive way to play single-player or multiplayer on up to four systems. Playnline, offline via local wireless, or simply pass a Joy-Con controller to a friend, so they can join your team. With another pair of Joy-Con controllers (sold separately), four players can team up on one system! The drop-in/drop-out co-op possibilities let players create their own "Ultimate Alliance" at will.
PostTweetShare Share with WhatsApp Share with Messenger
Community Updates
EBay DealsEBay discount code
If you click through or buy, retailers may pay hotukdeals some money, but this never affects which deals get posted. Find more info in our FAQs and About Us page.
New Comment Subscribe Save for later
Top comments
4th Dec 2019
Witcher 3 - £35.96

For a few more price takes into account the 20% off.
6 Comments
4th Dec 2019
Probably worth updating the post and making a list. I would but don't have the time unfortunately.

Can't say I've seen it drop other than via an ebay code, I think the last 20% off cleared thegamecollection ebay stock..
4th Dec 2019
Been waiting for a deal on this ..thanks
4th Dec 2019
call me a cynic but a lot of these were about 20% cheaper on their website a few days ago