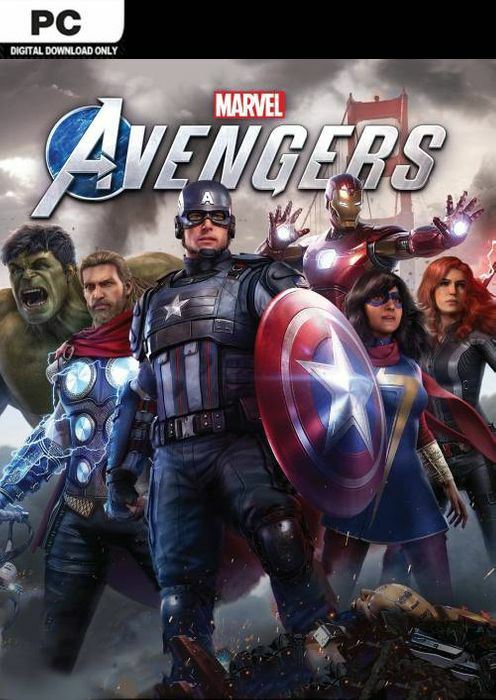 £41.99£49.9916%CDKeys Deals
11
Get deal*Get deal*
11Get deal*Get deal*
-163°
Marvel's Avengers - PC - £41.99 @ CDKeys
£41.99
Posted 4th Sep 2020
The top 3 reasons to play Marvel's Avengers PC
Assemble your team of Earth’s Mightiest Heroes, embrace your powers, and live your Super Hero dreams.
Marvel’s Avengers is an epic, third-person, action-adventure game that combines an original, cinematic story with single-player and co-operative gameplay.
Assemble into a team of up to four players online, master extraordinary abilities, customize a growing roster of Heroes, and defend the Earth from escalating threats.
About Marvel's Avengers PC
Marvel’s Avengers begins at A-Day, where Captain America, Iron Man, the Hulk, Black Widow, and Thor are unveiling a new, hi-tech Avengers Headquarters in San Francisco. The celebration turns deadly when a mysterious enemy causes a catastrophic accident which results in massive devastation. Blamed for the tragedy, the Avengers disband. Five years later, with all Super Heroes outlawed and the world in peril, a sprawling adventure ignites when a determined young woman named Kamala Khan sets out to reassemble and rebuild the Avengers to stop the unchecked power of the secretive new force known as AIM.
Marvel’s Avengers continues the epic journey with new Heroes and new narrative delivered on an ongoing basis, for the definitive Avengers gaming experience.
Progress through the single player campaign to rebuild your Hero roster and restore their powers; then continue to battle AIM solo or online with friends.
Unlock powerful skills and new gear for each of Earth’s Mightiest Heroes to suit your playstyle.
Customize these iconic Heroes with classic, fan-favorite, and all-new original outfits inspired by over 80 years of Marvel history.
Flexible combat system, dynamically scaling difficulty, plus customizable gear and skills to support unique playstyles for each Hero.
Using a reclaimed helicarrier as a base of operations, players launch Hero Missions (single-player) and Warzone Missions (single-player or co-op) in hotspots around the globe.
Up to four players assemble online to defend the Earth from escalating threats that only the Avengers can overcome.
The narrative will unfold over multiple years, with every new Super Hero and region delivered at no additional cost.
PostTweetShare Share with WhatsApp Share with Messenger
Community Updates
CDKeys DealsCDKeys voucher codes
New Comment SubscribeSave for later
11 Comments
4th Sep
I spent 1500 hours in Marvel Heroes, out of near 700 games on Steam it's the only one I got all achievments in, so it's safe to say that a) I'm a bit of a fanboy and b) my standards are low, yet I still didn't really enjoy the beta for this (I did it on PC and PS4 but cancelled my pre-order).
Fun with mates online maybe, but pretty dull and repetetive gameplay. Campaign story might be different, but once that's out of the way and you're left with the missions they're all muchly the same

Still, price is good, but I expect this will drop quickly
4th Sep
I've heard Spiderman isn't available to use, or is that only for the PS4 version?
4th Sep

Ps4 only, expected to come out next year. Wasn't a concrete answer on whether he's exclusive forever but it's likely
4th Sep
i feel its going to get quite chilly in here
4th Sep
This will drop very fast
4th Sep

This will drop very fast

This is probably true. Game has very mixed reviews.
4th Sep
this game is so so avarage and boring.....only for Marvel fans or good to check out for £5
4th Sep

This will drop very fast

You know it, definitely when they start bundling it with hardware like intel CPU's
4th Sep
I'm raging. I purchased this and neither Superman or Batman are playable. That's the state of the games industry.


‌
5th Sep
How reliable is cdkeys? I just purchased the xbox one version for £48.99, and after paying on via Paypal and the clicking on the link to download the code from my email, there is a message saying Under Review. I keep trying the refresh icon, but it is still Under review 30 mins later.
6th Sep

Used cdkey for many years and my keys are always available straight away, did you use a credit card on a new cdkeys account? If so that's why it's in review, it's to stop fraud, or maybe your payment card has been flagged up by the bank?