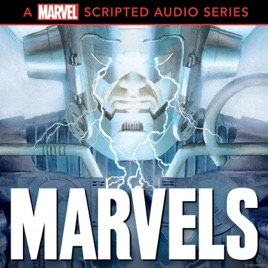 Similarly to the Wolverine: The Long Night podcasts from Marvel this was previously only available via Stitcher Premium. Episode 1 now available for free via Apple podcasts with nine further episodes to appear weekly.

"MARVELS takes place in the aftermath of the Fantastic Four’s battle with Galactus, high above New York City, for the fate of the world. One intrepid photographer, an ambitious college student, and a cynical journalist embark on an investigation to confirm or debunk one of the most super-powered conspiracy theories of all time..."
PostTweetShare Share with WhatsApp Share with Messenger
Community Updates
ITunes Store DealsITunes Store voucher
New Comment Subscribe Save for later
5 Comments
20th Mar
Looking forward to the Snowflake and Safespace adventures
google.com/amp…mp/
20th Mar
I think This is the Google podcast equivalent.
20th Mar
Thanks
20th Mar
Thank you! I regularly travel in the car with one of the world's biggest Marvel fans, and he hates me listening to my Podcasts. This will be a good cross-over for us to share in listening to : )
20th Mar

I think This is the Google podcast equivalent.

Thanks I was hoping to see this on Google. Loved this series in the 90s the art was amazing.