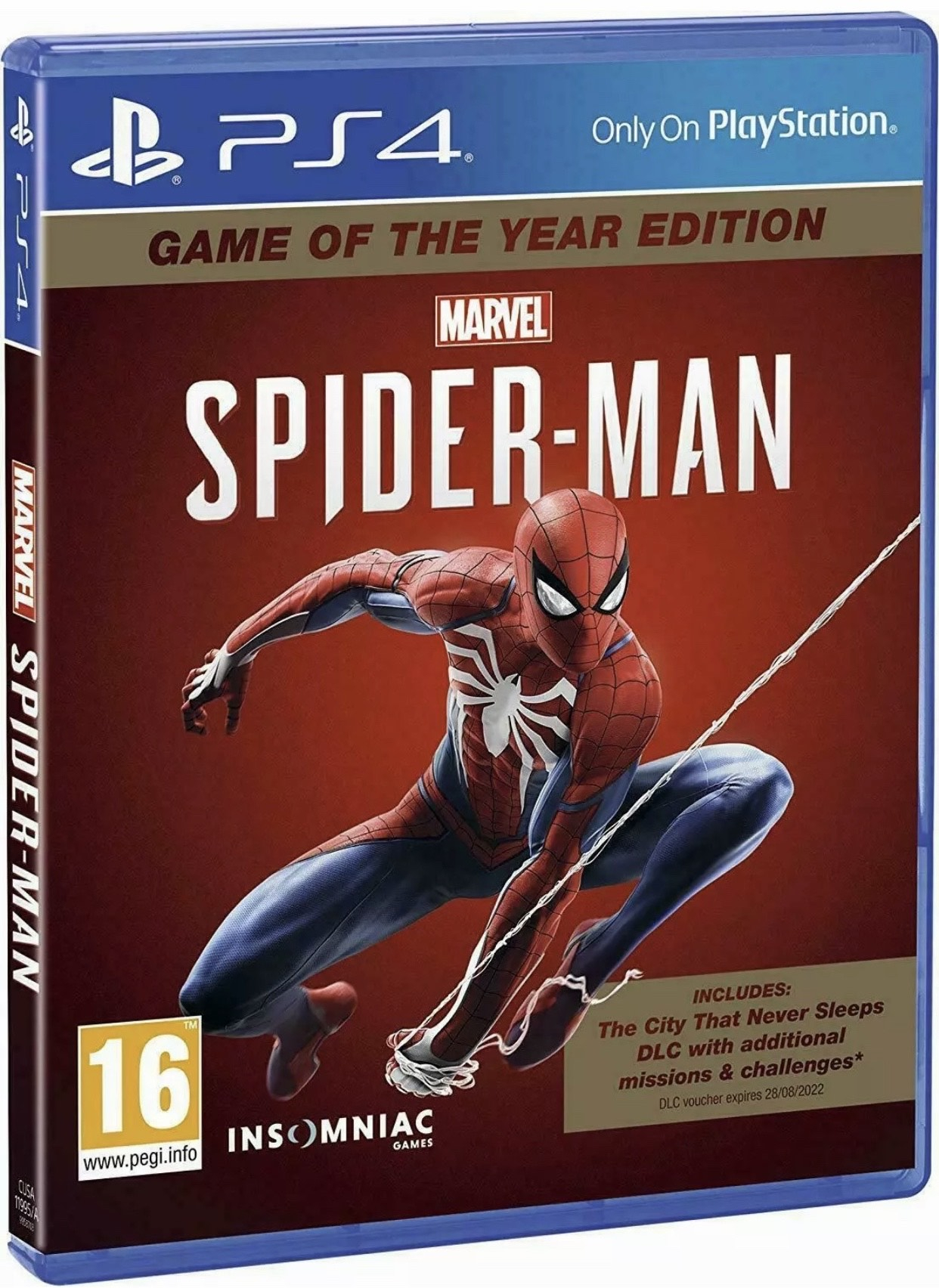 **English,French,Portuguese and Arabic on cover**

Play as Spider-Man like never before. Peter Parker’s life is beginning to collide with his powerful alter ego and he attempts to balance his career and save thousands of lives in New York City. Play as one of the most iconic superheroes created as he webs his way through New York City with incredible interaction with the open-world. Swing your way through missions and activities to defeat evil as well as unlock special skills to help with his parkour and combat abilities. Sony Interactive Entertainment has teamed up with Insomniac Games to create Marvel’s Spider-Man and introduce incredible graphics and elements that haven’t been seen before. There are hours of gameplay to enjoy as you play as Peter Parker and battle the big crime in New York City. The new adventure features parkour and unique environmental interaction which you can make the most of as you web-sling and wall-crawl your way around with Spider-Man’s acrobatic abilities. The way this superhero interacts with his surroundings and combats evil really is unique but superb!

Features:
Be Spider-Man - An experienced Spider-Man with several years of crime fighting under his belt, Peter Parker has sheer mastery of his powerful spider-sense, dynamic skills, acrobatic abilities, and new suit.
Original Story - An all-new Spider-Man universe featuring familiar characters in unfamiliar roles. Peter Parker deals with his complex dual life as a young adult with great powers, discovering how his many relationships evolve.
Blockbuster Action in an Open World - Swing freely through Marvel’s New York City as Spider-Man via cinematic set-pieces filled with a rich narrative and relatable characters.
PostTweetShare Share with WhatsApp Share with Messenger
Community Updates
EBay DealsEBay discount code
New Comment Subscribe Save for later
35 Comments
7th Feb
Nice, Michael.
8th Feb
Just to let everyone know (especially physical game collectors)... This Game Of Year Edition doesn’t have the DLC on the disc. It’s exactly the same game/disc as regular edition but comes with a piece of paper with the DLC code printed on it.
8th Feb

I don’t get why they do this, aside from cost cutting. It’s not right.

I remember Mafia 2 came with it on the disc. Not seen it in recent years
8th Feb

Paper codes are common now, and rubbish, I agree. A recent exception is Shadow of the Tomb Raider, which now has a proper definitive edition with all DLC on the disc.

This is a handy page:

forum.blu-ray.com/sho…998
8th Feb
Import though, difficult to trade after (plus the code is useless).
8th Feb

Thanks, for Horizon unopened so that’s very useful. Thanks for the page
8th Feb

On tHat note I may as well open the others 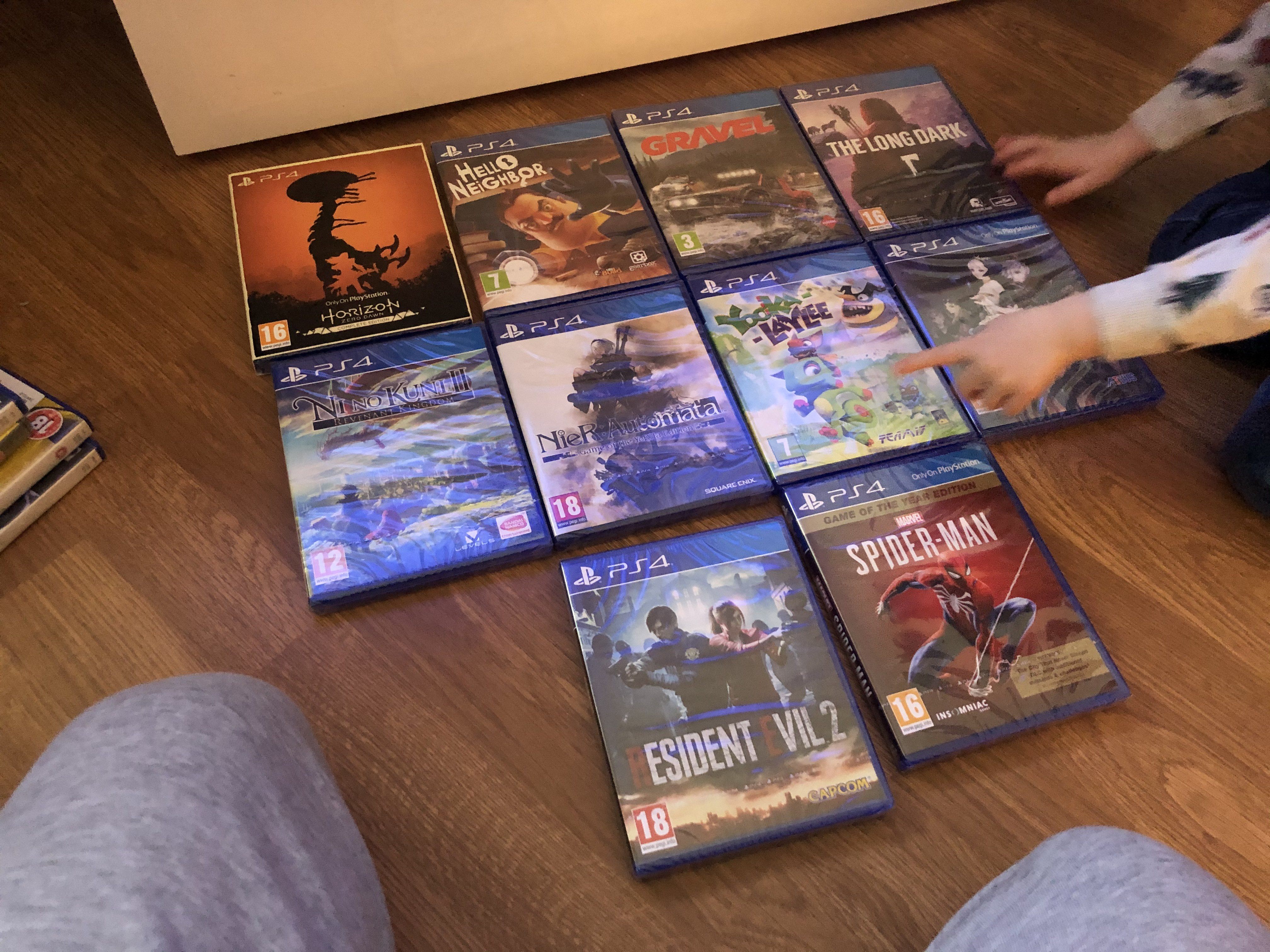 Import though, difficult to trade after (plus the code is useless).

What you on about? It’s a PAL copy
8th Feb

What you on about? It’s a PAL copy

Yeah but it’s just the writing saying it’s the GOTY and contents. The rest is English. It’s not hard to resell it and it’s a PAL copy.

They’re would be issues if it was all in a different language but it’s not
8th Feb
I didn’t enjoy this game as didn’t ‘feel’ right. Try God Of War or one of the Tomb Raider games for the best action games on PS4
8th Feb

I'm talking trading in because the barcode might not match but fair enough.
8th Feb
Thanks for posting. We have added your thread to the Highlights pages
8th Feb

I'm talking trading in because the barcode might not match but fair enough.

Nah, I traded in a fully German copy of Mario Kart DS at CEX. And I mean no English writing anywhere. They took it
9th Feb

Game used to be funny about it - there was no reason for them to be but they were - I had to sell some on Ebay instead but they go for a better price anyway so it doesnt matter.
9th Feb

Game aren’t very good though. Often their prices given are less than CEX and generally worse when it comes to other things so I tend not to use them now anyway.
9th Feb
Worth every penny. Great game
9th Feb
..everyone's aware it's like £14 on the PS Store right? Not sure if it's the GOTY edition but I do know some folk prefer not having discs nowadays 👌
9th Feb
Great game, but to be honest by the time you've done the main story plus the DLC it's very repetitive. Still, well worth it at this price.
Edited by: "ALennon25" 9th Feb
9th Feb
I finally started this. Played for an hour or two and already bored. Mind you I also recently played tomb raider and found that a bit of a letdown..
11th Feb

What you on about? It’s a PAL copy

What you on about?

PAL is an analogue colour encoding standard, which the PS4 is unable to display natively
11th Feb

I was generally speaking of it being able to sell on in this country okay without going into details...
11th Feb

PAL is used incorrectly to define a region here, in fact as we know the PS4 is actually region free. However, the DLC is region locked. Just because this game has 'English' as a language doesn't necessarily mean the DLC is redeemable in the UK
Edited by: "Jace_Phoenix" 11th Feb
11th Feb

Yeah I know. Was trying to keep it simple as it was a response to someone asking about resale values etc
11th Feb

Indeed, i think they meant with CEX, and other places etc. They usually won't purchase out of region games.
11th Feb

Yeah they took my German copy of Mario Kart DS. Like fully German writing on it no English so was just explaining that this copy of Spider-Man they will take
11th Feb

They wouldn't take my US copy of Last of Us PS4, was returned to me (even though it ran fine on UK PS4). They check the CUSA number.

Your Mario Kart is a special case, and an exception to the rule, not one that proves it.
Edited by: "Jace_Phoenix" 11th Feb
11th Feb

Well it does prove it because it’s a EUROPEAN copy like I’ve been saying...

Your copy was US so it’s obvious why they rejected it. Even if they are region free it’s irrelevant
12th Feb

Oh and by the way, they didn’t accept your game because it didn’t have a PEGI rating. Figures you would have thought of that before trying to correct me with things I already knew....
13th Feb

My original point was about PAL being used incorrectly.

And it being slightly harder to shift a game that has Arabic writing all over it.

No idea what you're now still rambling on about, when i sent them my game i had no idea it was even the US version until they returned it to me. Didn't even look.. Besides... it was just an example.
Edited by: "Jace_Phoenix" 13th Feb
13th Feb

Mine was just an example also. No need to get worked up about it 👌
13th Feb

Mine was just an example also. No need to get worked up about it 👌

I would give up trying to ascertain someones emotions from black and white text... it doesn't work.
13th Feb

Fair enough if you didn’t mean anything by it. Just came across as you were. Apologies anyway
13th Feb

Nah mate, all good here. No reason for me to be.
14th Feb
Just ordered my copy from an eBay shop called "thepreorder.shop"
PAL UK copy to for the same price. Was the last one as well