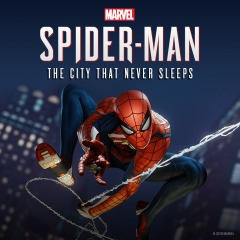 LEASE NOTE THAT THIS IS A SEASON PASS INCLUDING ALL THREE CHAPTERS OF MARVEL’S SPIDER-MAN: THE CITY THAT NEVER SLEEPS.

Marvel’s Spider-Man: The City That Never Sleeps DLC to continue your

adventure in Marvel’s New York. Get access to three story chapters that

include additional missions and challenges, brand new factions of

enemies from the Spider-Man universe, and additional suits to unlock.

Marvel’s Spider-Man: The Heist – Felicia Hardy aka Black Cat, is back

the city from calamity.

Marvel’s Spider-Man: The City That Never

Sleeps is downloadable content for Marvel’s Spider-Man. May be sold

I was just thinking the same - heat from me
22nd Nov 2019
Played and loved the game - is this worth buying? Stung a few times in the past with buying DLCs for great games which weren't up to scratch and ruined the memory, if you catch my drift.
22nd Nov 2019