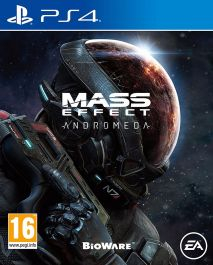 the Andromeda galaxy, far beyond the Milky Way.There, players will lead

our fight for a new home in hostile territory where WE are the aliens.

explorers - with deep progression and customisation systems.This is the

story of humanitys next chapter, and player choices throughout the game

will ultimately determine our survival in the Andromeda Galaxy. As you

lies on your shoulders You must ask yourselfHow far will you go?

I loved the original Mass Effect trilogy, I stayed clear of this until they patched it. Around two (mediocre) hours in I had a game breaking bug that stopped progression. Deleted and resold it on.
6th Apr

Andromeda unfortunately, wasn't a patch on the previous games. I bought it at launch and it was heartbreakingly bad. Definitely not the Mass Effect you should start with, it'd probably end up putting you off the series completely.

If you've never played any of the Mass Effects then I'd highly recommend playing the trilogy, starting from the first Mass Effect.
Amazing games and still my favourite games to this day ‌
6th Apr
muh
6th Apr

Thanks for the wonderful insider view
7th Apr
Great game.
7th Apr
Just found the demo on the ps store if anyone wants to try before they buy