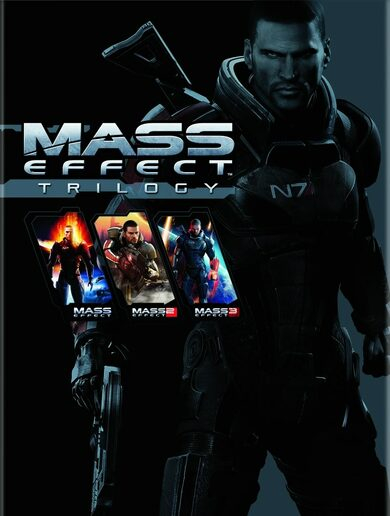 Mass Effect Trilogy is a package that includes the three first Mass Effect games, released in 2008, 2010 and 2012 on PC, respectively. The trilogy follows Shepard, a character that players can customize, as they leads his or her squad into unveiling a new danger that will determine the future of every being in the galaxy. As you adventure through the game, however, many other subplots will appear, as your squad has their own lives and worries, and your relationship with them will shape their attitude around you.

In game, players will be commanding their ship to planets as the story progress, and once they are there, players can expect fine third-person shooters in which you take cover, run, and maneuver in the field as you see fit in order to clear areas to then explore them. In some occassions, gunfights can be allowed, either through stealth or dialog depending on the player skills.

Guns can be tuned and upgraded, just like the player character, and the games also allows players to change what bullet type they will be using in order to take advantage of certain enemy groups weaknesses. The Mass Effect trilogy also feature classic Bioware RPG elements. Specifically, choices are taken seriously by the game and the player will have to make difficult decisions during the whole trilogy: "Who will you save?", "Which mission to start first?", "Who are the real enemies?" are all common questions you will face while playing the games. After all, your squad is shaped by your decisions, and so is your reputation. Your decisions will carry over all way through the last game and they will impact how the Mass Effect universe reacts to your presence.

This price is the current best on the whole trilogy according to GG.Deals and title price includes PayPal fees + voucher.
PostTweetShare Share with WhatsApp Share with Messenger
Community Updates
Eneba Deals
New Comment Subscribe Save for later
8 Comments
20th Feb
Origin key, don't think Mass Effect 3 is on Steam
20th Feb
This should of had a remaster for current gen consoles
20th Feb

This should of had a remaster for current gen consoles

Agreed, although there's room for improvement 2 & 3 certainly hold up well on PC. The extensive DLC released for ME3 also seems criminally underplayed due to distribution decisions.
20th Feb
Skip 3 btw.
20th Feb
Check if this comes with the free DLC for an improved ending for 3. They don't offer it separately for some reason (or at least they don't on the UK origin store) so if you want it you have to buy all of the DLC's to get it.
20th Feb

I've just bought it and added it to my account using my phone browser so can't check any further, but it has added 2 items for ME3. They look identical though...
20th Feb

3 is excellent once you accept the endings aren't as drastically different as you'd hoped, combat is much improved. 2 was the most fun. 1 dated badly
20th Feb
Hum...I swore myself never to buy anything on grey market, but that's really tempting...