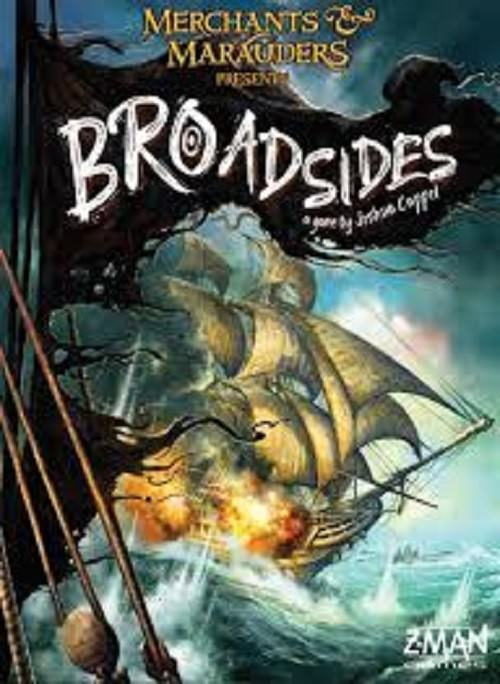 6.6 on board game geek and looks like it's worth a shot at this price...

Set in the Merchants & Marauders universe,
Broadsides is a standalone game in which the two opposing players command pirate ships engaged in a fierce battle over a profitable sea lane. Sinking the enemy or taking out their Captain and First Mate are the only ways to seize victory and survive the day!

The card-driven game system allows players a wide variety of actions, triggered by playing cards in a variety of combinations.

Aim: zero in your cannons using an innovative targeting system

Broadside: Blast all your cannons at once in a fierce but costly salvo

Sheer Off: Correct your course just enough to disrupt your foe's plans

Repair: Send sailors where they are needed to man the guns, patch the hull, or replace ruined sails

Additionally, your Captain's unique Reputation and a handful of drafted Dirty Tricks means that every matchup will be different from the last. Multiple tactical approaches to either of the win conditions means that you can tailor your gameplay to your strengths and your foe's weaknesses. Outthink, outplay, outgun, and sail away the winner
PostTweetShare Share with WhatsApp Share with Messenger
Community Updates
EBay DealsEBay discount code
New Comment Subscribe Save for later
5 Comments
4th Feb
That's odd, that's the 2nd time I've seen this game tonight!
One of the members of my new group are selling it on FB. No idea what it's like though
4th Feb
This is pretty good @jayhutton10 I really like some of the mechanics of the game, like using standard playing cards in order to measure the effectiveness of hits against your opponents. Only played this a couple times but would recommend. Important to note it is only 2 player but this game has lovely components and a great theme
4th Feb

Mine is in the post, but I'll come back and comment if it's any good. I like the theming so thought it's worth a try at that price.
4th Feb
Ordered to play with my 11 year old daughter. Eye patches mandatory!
12th Feb

To update: this came really quickly via Royal Mail and I got round to playing last night.

Good fun, but as with all games it will definitely be better the second time round now we have the hang of all of the rules. I think it could end really quickly or take a long time partly on luck and partly on strategy.

Definitely well worth it at this price.