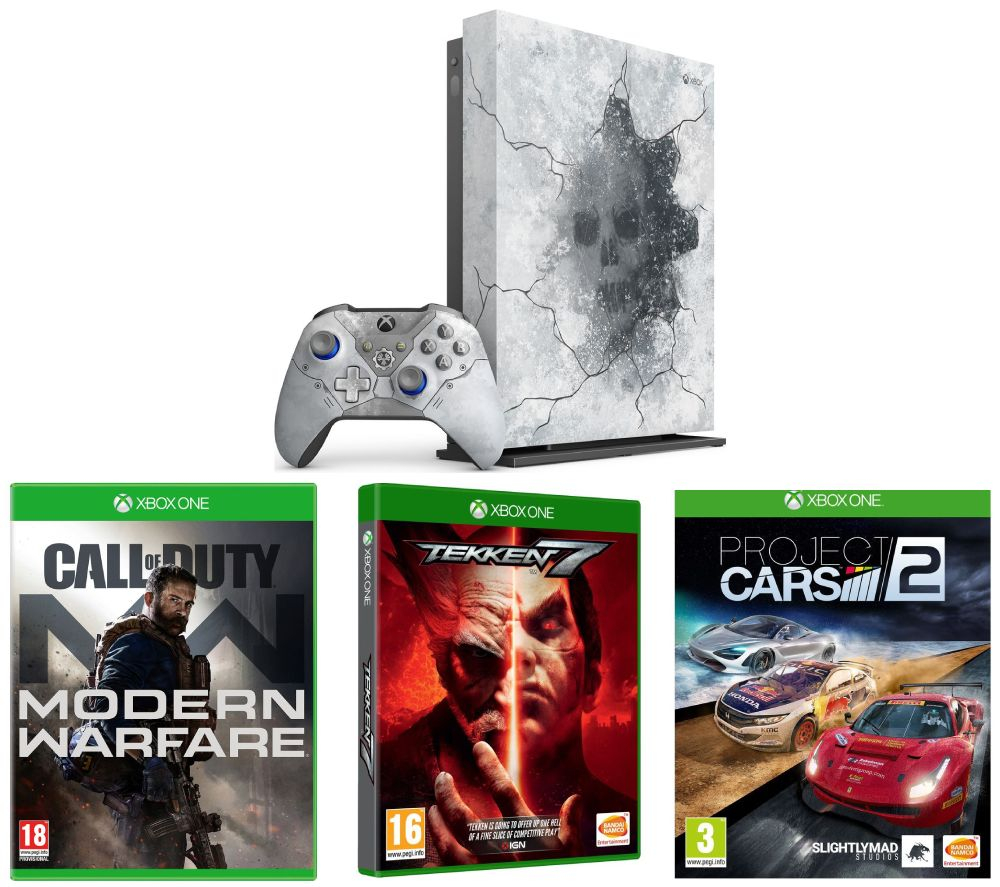 Get ready for action-packed adventures with the Microsoft Limited Edition Gears 5 Xbox One X, Call of Duty: Modern Warfare, Project Cars 2 & Tekken 7 Bundle.
__________________________________________________
Microsoft Limited Edition Gears 5 Xbox One X
Want to game in 4K? Look no further than the Xbox One X. The X is incredibly powerful – so your games are super smooth and realistic, with lightning fast load times.
And the Xbox One X doesn't just give you Ultra HD graphics, you've got HDR too. HDR (High Dynamic Range) gives you better contrast on your games. So when you're exploring a dark city scene, or hunting through a creepy mine, you'll see everything in the shadows.
The Limited Edition Gears 5 Xbox One X bundle features the Crimson Omen design and includes a full game download of Gears 5: Ultimate Edition, as well as Gears of War: Ultimate Edition and Gears of War 2, 3 and 4. You'll even get a 1-month trial of Xbox Live Gold, so you can start to explore even more titles.
__________________________________________________
Gears 5
Humanity's reliance on technology has become their downfall and enemies are uniting to wipe out all survivors. As Kait, journey back to uncover the origins of the Locust, and fight with your squad to protect what's left.
Call of Duty: Modern Warfare (2019)
In the visceral and dramatic single-player story campaign, Call of Duty: Modern Warfare pushes boundaries and breaks rules in a heart-racing saga. In London you'll be under the leadership of Captain Price as you raid terrorist cells and try and prevent attacks. While in the fictional Urzikstan you'll be the leader of a rebel militia group.
Project Cars 2
With over 170 cars from iconic brands, and more tracks than any other racing game, Project Cars 2 lets you compete in lots of different classes, including Rallycross, IndyCar and much more. Challenging AI makes you really race against the other cars - with intense competition, you'll need all your skill to become the next racing hero.
Tekken 7
Unveil the final chapter in the 20-year long Mishima feud with Tekken 7, which is designed with a stunning cinematic feel. Seamlessly blending between fierce battles and powerful story sequences, Tekken 7 follows the members of the Mishima Clan as they settle old scores and wrestle for control of a global empire.
PostTweetShare Share with WhatsApp Share with Messenger
Community Updates
Currys PC World DealsCurrys PC World discount code
If you click through or buy, retailers may pay hotukdeals some money, but this never affects which deals get posted. Find more info in our FAQs and About Us page.
New Comment Subscribe Save for later
Top comments
26th Oct 2019

I strongly feel that xbox one x is still overpriced. It dropped to aprox £270 back in the summer and it should never have gone above £300 again. But yeah, a deal is in the eye of the beholder...
26th Oct 2019

Have you never seen "The Incredibles"? A cape will get you killed in this buisness.
19 Comments
26th Oct 2019
I can't vote on these deals. Retailers have been trying to dump Tekken 7 and project cars on these bundles for months. Still over inflated at these prices imo.
26th Oct 2019

I strongly feel that xbox one x is still overpriced. It dropped to aprox £270 back in the summer and it should never have gone above £300 again. But yeah, a deal is in the eye of the beholder...
26th Oct 2019
I've just sent my Xbox one X back as it started playing up under warranty. They gave a full refund.

Description says 8 games am I missing something I can only see 4?

I dont have a cost ceiling. I am actually looking out for my fellow hotukdeal users by imparting some of my experiences with pricing over the last 6 months. If history is anything to go by, wait for black friday deals.
26th Oct 2019

Have you never seen "The Incredibles"? A cape will get you killed in this buisness.
26th Oct 2019
Take a £100 off this price and I'd call that a deal. Otherwise it's a no from me. I know my Xbox one S 500gb is outdated now but 3 years ago at black Friday I bought it for £230 with forza horizon 3, minecraft and extra wireless controller. Once the X comes down in price to £250 with a game or a controller I csnt justify the cost
26th Oct 2019

Why would you buy this when the new Xbox console is out next year?

Better to have a mature console with a very healthy 4K games catalog, especially if you’ve a 4K tv, than waiting a whole year to find a console with few day one barely optimised game releases and guaranteed first gen bugs.
28th Oct 2019