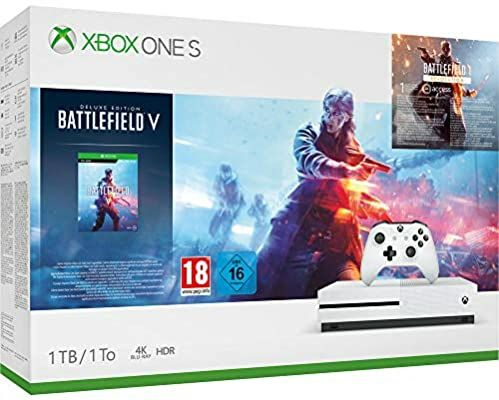 description
Return to humanity's greatest conflict with the Xbox One S Battlefield V Bundle. Sign up for service with the Battlefield V Deluxe Edition including paratrooper clothing, special orders, and weekly airlifts. Lead your company into battle on detailed battlefields in breathtaking HDR graphics. Whether you're in a nerve-wracking battle, watching 4K Ultra HD Blu-rays and streams, or streaming gameplay yourself, there's never been a better time for Xbox One. As an extra, you will receive the digital full versions of Battlefield 1: Revolution Edition and Battlefield 1943 (downward compatible) as well as a month of EA Access. Register for service. Lead your company into spectacular battles with the Battlefield V Deluxe Edition and enjoy exclusive extras,