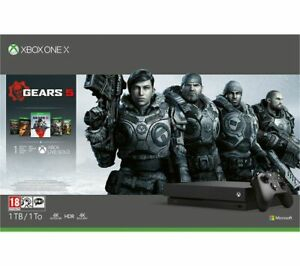 The world's most powerful Console. Games play better on Xbox One x. With 40% more power than any other Console, experience immersive true 4K gaming. Blockbuster titles look great, run smoothly, and load quickly even on a 1080p screen. Xbox One x also works with all your Xbox One games and accessories as well as Xbox live, the most advanced multiplayer network, giving you more ways to play.

Games play better on Xbox One X. Experience 40% more power than any other console6 teraflops of graphical processing power and a 4K Blu-ray player provides more immersive gaming and entertainmentPlay with the greatest community of gamers on the most advanced multiplayer networkWorks with all your Xbox One games and accessoriesGreat for 1080p screens-games run smoothly, look great, and load quickly

The world is crumbling. Humanity’s reliance on technology has become their downfall and enemies are uniting to wipe out all survivors. As Kait you must journey across the biggest, most beautiful Gears world to uncover the origins of the Locust, and fight with your squad to protect what’s left.

Never Fight Alone Play solo or with a friend in local split-screen co-op, or online co-op. Battle alongside your friends anywhere with cross-play between Xbox One and PC.

Explore Sera Skim across glaciers, sail over deserts and descend into sunken ruins to discover the largest and most diverse Gears world ever created.

Visual Showcase Play every mode in 4K Ultra HD resolution with stunning HDR at a smooth 60 frames per second.
PostTweetShare Share with WhatsApp Share with Messenger
Community Updates
Cyber Monday 2020 DealsEBay DealsEBay discount code
If you click through or buy, retailers may pay hotukdeals some money, but this never affects which deals get posted. Find more info in our FAQs and About Us page.
New Comment Subscribe Save for later
13 Comments
2nd Dec 2019
Was waiting for this one thanks heat added
2nd Dec 2019

Was waiting for this one thanks heat added

I should get off this app...

The 6% might be the Premium rate. If you have a standard account, it's worth upgrading to Premium before purchasing as it's only £1 a month.
6th Dec 2019
I received mine today. In my case, it was not a new item.

I've initiated a return and am currently arguing with them about how they are going to collect their item. I'm not taking a day off work so I can sit in while they send a courier around between 9AM and 5PM. I don't get paid if I don't go to work!