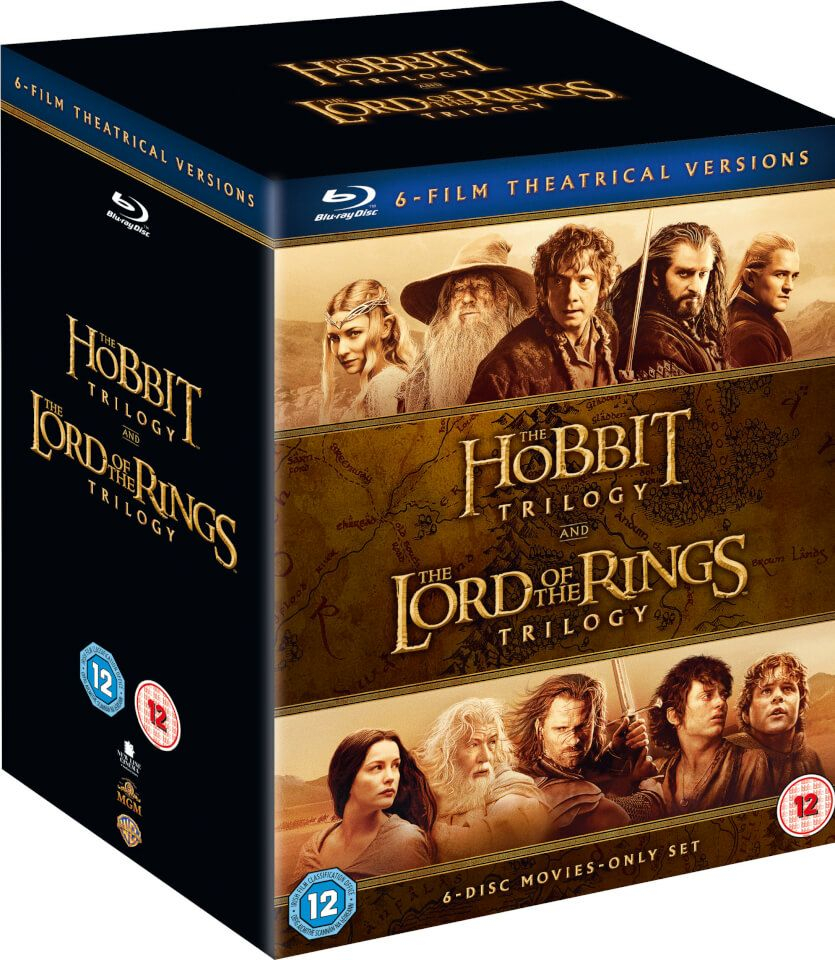 Synopsis: FELLOWSHIP OF THE RING
Assited by a fellowship of heroes, Frodo Baggins plunges into a perilous trek to take the mystical One Ring to Mount Doom so it and its magical power can be destroyed and never possessed by evil Lord Sauron. The astonishing journey begins in the first film of director/cowriter Peter Jackson’s epic trilogy that redefined fantasy filmmaking. This imaginative foray into J.R.R. Tolkien’s Middle-earth won four Academy Awards and earned 13 total nominations, including Best Picture.

THE TWO TOWERS
Frodo and Samwise press on toward Mordor. Gollum insists on being the guide. Can anyone so corrupted by the ring be trusted? Can Frodo, increasingly under the sway of the ring, even trust himself? Meanwhile, Aragorn, drawing closer to his kingly destiny, rallies forces of good for the battles that must come. Director Peter Jackson delivers an amazing second movie that won two Academy Awards and earned six total nominations, including Best Picture. The journey continues. So do the astonishing spectacle and splendor.

RETURN OF THE KING
It is time. For Frodo to overcome the wickedness of Gollum, the horrifying attack of colossal arachnid Shelob and the soul-twisting allure of a ring that resists destruction. For Aragorn to take up the sword of his forebears and the crown of his birthright. For the mighty clash that Wizard Gandalf calls “the great battle of our time. ” And for the inspired culmination of the fi lms based on J.R.R. Tolkien’s literary classic. For the third time, a Rings movie was a Best Picture Academy Award nominee, and for the first time it claimed that prize (plus 10 more). The King deserves its crown.

AN UNEXPECTED JOURNEY
Follow title character Bilbo Baggins, who – along with the Wizard Gandalf and 13 Dwarves, led by Thorin Oakenshield – is swept into an epic quest to reclaim the lost Dwarf Kingdom of Erebor from the fearsome Dragon Smaug. Their journey will take them into the Wild and through treacherous lands inhabited by Goblins, Orcs and deadly Wargs, as well as by a mysterious and sinister figure known only as the Necromancer. Along the path, the unassuming Bilbo Baggins not only discovers depths of ingenuity and courage that surprise even himself, he also gains possession of a “precious” ring tied to the fate of all Middle-earth in ways he cannot begin to imagine.

THE DESOLATION OF SMAUG
THE HOBBIT BILBO BAGGINS, the Wizard Gandalf and 13 Dwarves, led by Thorin Oakenshield, continue their journey to reclaim the Dwarf Kingdom of Erebor. Along the way, they encounter skin-changer Beorn; giant Spiders of Mirkwood; Wood-elves led by Legolas, Tauriel and King Thranduil; and a mysterious Man named Bard, who smuggles them into Lake-town. Finally reaching the Lonely Mountain, they face their greatest danger – the Dragon Smaug.

BATTLE OF THE FIVE ARMIES
Thorin Oakensheild and the Dwarves of Erebor have reclaimed the vast wealth of their homeland, but now face the consequences of having unleashed the terrifying Dragon Smaug upon Lake-town. Meanwhile, Sauron, the Dark Lord, has sent forth legions of Orcs to attack the Lonely Mountain, and Bilbo Baggins finds himself fighting for his life as five great armies go to war. As darkness converges, the races of Dwarves, Elves and Men must decide – unite or be destroyed.
Director: Peter Jackson
Cast: Ian McKellen, Martin Freeman, Christopher Lee, Cate Blanchett
Region Code: Region Free
Cert: 12
Format: Blu-ray
PostTweetShare Share with WhatsApp Share with Messenger
Community Updates
EBay DealsEBay Discount Codes
New Comment SubscribeSave for later
Top comments
7th Jul
Forget this, fans should really go for the extended version. With nearly 40 to 50 minutes extra in the Two Towers and Return of the King e.g., it is a no brainer. The extended version tells you what happened to Saruman and Wormtongue!
7th Jul

In my eyes the extended version is the only version that exists
17 Comments
7th Jul
This is tempting heat added great find
7th Jul
Cheers mate.
7th Jul
Good deal if not bothering with the 4ks
7th Jul

Good deal if not bothering with the 4ks

there are none currently
7th Jul
Forget this, fans should really go for the extended version. With nearly 40 to 50 minutes extra in the Two Towers and Return of the King e.g., it is a no brainer. The extended version tells you what happened to Saruman and Wormtongue!
7th Jul
Great price
7th Jul

Agreed. All those extra bits explain some of the things that were missed. Even the bit where Aragorn explains how he is so resilient.
7th Jul

"fans" would actually know that what happens to saruman and wormtongue is still entirely made up in the films, and that the scouring of the shire is what really happened!
Edited by: "spongebob1913" 7th Jul
7th Jul
4k extended editions please, then I’ll buy!
7th Jul

I prefer the way the films handled that
8th Jul
Are there no 4K versions of these about?
8th Jul

Are there no 4K versions of these about?

Nope, But rumour has it that is coming very soon along with the amazon series.

I will hold off till then.
8th Jul

Sometimes 4K versions of originally HD movies are hit or miss so yeah I'll wait and see reviews if it happens.
8th Jul

Yh, rewatching the hobbit movies kind of made me realize why peter jackson was reluctant to bring it to 4k. The cgi and even some make up work was just pretty bad. If it looks bad on full hd imagine 4k.