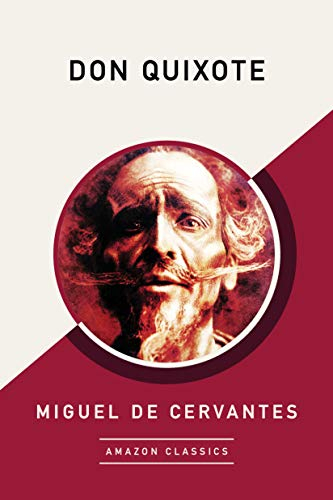 Don Quixote, a man driven by chivalrous ideals and wild delusions, adopts sword and lance as a knight-errant to defend the weak, slay the ignoble, and win the heart of the farm girl he envisions as a princess. In his world of fantasy—where inns are castles, peasants are kings, and windmills are beasts—Quixote, his nag, and his sound but devoted squire, Sancho Panza, set forth on a picaresque adventure conceivable only to a man obsessed.

One part legendary quest, one part metareflection of that very legend, Don Quixote remains, after four centuries, one of the most radical, profound, playful, and heartbreaking epics ever dreamed.

Revised edition: Previously published as Don Quixote, this edition of Don Quixote (AmazonClassics Edition) includes editorial revisions.
PostTweetShare Share with WhatsApp Share with Messenger
Community Updates
Amazon DealsAmazon discount code
New Comment Subscribe Save for later
10 Comments
23rd Mar
Watched 'The Platform' movie on Netflix and a guy was locked up for 6 months and choose only this book to take with him.
23rd Mar
Loads of amazon classics books are free right now mate - but then I am sure you'd soon get a comment that these are outside copyright and hence free all the time at other places (oops, I just said the same too (skeptical))
23rd Mar

They are free all the time on Amazon! You don't even have to go to "other places"!

They've been free for as long as I've had a Kindle - about 5 years.
23rd Mar
Everyone needs a windmill in their life
23rd Mar

Why bother....
23rd Mar
It's Don Quicksoat for me, none of that fancy,schmancy talk.
23rd Mar
Many thanks masterpieceee
24th Mar

It's Don Quicksoat for me, none of that fancy,schmancy talk.

Like Ypres was 'Wipers' to British troops in WW1
24th Mar
Thanks DealDroid🌞
29th Mar
Heat OP but I'm seeing quite a few posts for free Kindle ebook titles on Amazon (and some paid ones) but there are thousands of free titles all in one place. Here it is again in case you aren't aware plus a link to the Magic Catalogue.