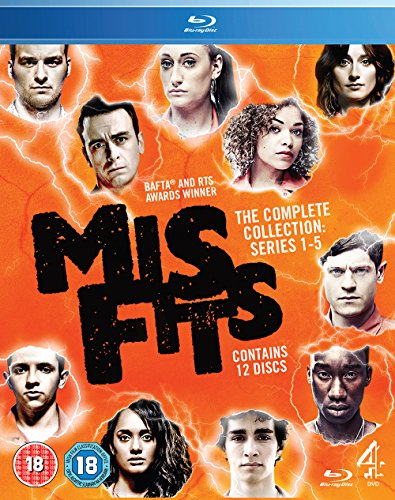 £23.99£254% Free P&P FreeAmazon Deals
13
Get deal*Get deal*
13Get deal*Get deal*
Posted 17th Jun
Part comedy, part drama, part sci-fi. If you've never seen this, then you're in for a treat. It's hilarious, exciting and thrilling all at the same time.

After a freak storm hits the estate, a group of teenagers on community service discover that they've developed strange superpowers. As the gang try to come to terms with their powers they soon realise they weren't the only ones to be effected by the storm...

But our gang of Misfits don't swap their mobile phone and ankle tags for capes and tights. Instead, they discover just how tough life can be when you're all that stands between good and evil.

I think the first two are genuinely some of the best TV I've ever seen.
13 Comments
17th Jun
First 2 series are absolutely fantastic. 3rd series good. 4th and 5th not as good as first 3 but still have some good episodes.

I think the first two are genuinely some of the best TV I've ever seen.
17th Jun
I might watch this again. It's good.
17th Jun
Great music, Rolex Sweep was perfect for the time travel episode.
17th Jun
Two fantastic series. First episode of series 3 I was done. Can't stand the actor who played Rudy. To the point I can't watch Brassic.
17th Jun
Isn’t this on All 4 to stream at zero cost
17th Jun
Season 4 was a Heroes-style massive drop in quality but it's £24 for the first 3 season as they are brilliant and tell a complete story.
17th Jun
It lost its way but love the show
17th Jun

That's unfortunate because brassic is brilliant.
17th Jun
As Nathan was thr best character expected a quality drop after 2, and although it was never quite the same was impressed Kelly then Rose up to fill the funny vacuum and remember the nazi one was hilarious
17th Jun
SAVE ME BARRYYYYYY
17th Jun

That's unfortunate because brassic is brilliant.

I have it's really good. But it is what it is.