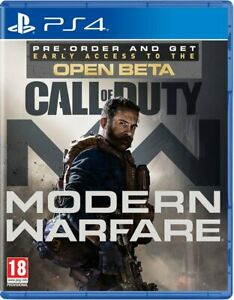 Cheapest preorder yet for this. Previous one was £42.99.

Thanks to @WelshTony1 for the following FAQ.

1: Payment taken straight away
2: May show as full payment but if you look at the bottom of the paypal you will see money came from paypal code and correct amount taken from your paypal.
3: May list as dispatch but it is listed on the listing the following
“You may receive a dispatch email when you initially place the order but please disregard this as your order will be dispatched closer to the release. If for any reason our stock is delayed we will contact you to let you know.”

Just to add too.
4: If either version shows out of stock, give it a little while (about 30 mins) and Game Collection will relist the games again. I’ll try to keep on top of the links as much as possible. ‌

Prepare to go dark, Modern Warfare® is back!

The stakes have never been higher as players take on the role of lethal Tier One operators in a heart-racing saga that will affect the global balance of power. Call of Duty®: Modern Warfare® engulfs fans in an incredibly raw, gritty, provocative narrative that brings unrivaled intensity and shines a light on the changing nature of modern war. Developed by the studio that started it all, Infinity Ward delivers an epic reimagining of the iconic Modern Warfare® series from the ground up.

In the visceral and dramatic single-player story campaign, Call of Duty: Modern Warfare pushes boundaries and breaks rules the way only Modern Warfare can. Players will engage in breathtaking covert operations alongside a diverse cast of international special forces and freedom fighters throughout iconic European cities and volatile expanses of the Middle East.
PostTweetShare Share with WhatsApp Share with Messenger
Community Updates
EBay DealsEBay discount code
If you click through or buy, retailers may pay hotukdeals some money, but this never affects which deals get posted. Find more info in our FAQs and About Us page.
New Comment Subscribe Save for later
Top comments
14th Oct 2019

I’m the same. Anything over £40 feels I am overpaying.

I still remember the supermarket price wars back in the day. Pretty sure I picked up Modern Warfare 2 for just £26 from Sainsbury's 😁 They we're all at it back then. I think some started doing the "get COD for £25 if you buy £30 of groceries" thing as well.

Balls, forgot to use these.

Doesn't matter if it's the "worst mode" its appalling that they would give it a console exclusive for an entire YEAR! Like... complete madness.
25th Oct 2019
Game arrived 🙏 can't wait to play on Sunday when the this update has finished.
402 Comments
14th Oct 2019
Time to pre order cheers

deleted83668
14th Oct 2019
It’s only £8.36 wrong, and what’s £8.36? It’s lunch. Or a pint in London.
Still going to wait for that magic £30 psychological buy point
14th Oct 2019
Going digital for game share on this one
14th Oct 2019
Anybody used their eBay store for preorders before? I noticed the estimated delivery is after release but I’ve ordered through their website many times and they’ve always delivered on or before release
14th Oct 2019

Looks to be the same as the site as it says

“Please note - this is a Pre-Order. We will aim to dispatch the order 1-2 days before the release date. You may receive a dispatch email when you initially place the order but please disregard this as your order will be dispatched closer to the release. If for any reason our stock is delayed we will contact you to let you know."
14th Oct 2019

Nice one thank you. I’ve just ordered it now. Heat added
14th Oct 2019
Not bought a COD since MW3 and was tempted by this one but not after a couple modes are not available for a whole year to xbox players, it's just dumb esp if you're more of a offline kinda player.
14th Oct 2019
Boycotting this until they remove the YEAR exclusive mode on Ps4 , such a silly, silly move. And that's coming from someone who owns both a Ps4 Pro and Xbox One X!
14th Oct 2019

It’s just one mode, isn’t it? Think it’s called Survival and comes under the Spec Ops mode. It’s probably the worst mode and was just offered to appease Sony. I wouldn’t worry too much about it.

*Edit* It’s basically a horde mode. Definitely sounds like it could be the worst mode.

Unrelated to the Special Ops Operations and Missions is an additional wave-based horde mode known as Special Ops Survival. This is an exclusive,* additional cooperative mode for PS4 Call of Duty: Modern Warfare players that pits you and up to three of your friends against enemy forces in intense cooperative combat on one of three Multiplayer maps. In Special Ops Survival Mode, you will fight off waves of increasingly difficult and determined combatants in a variety of experiences.

It's like this for all pre-orders on their eBay store in my experience, but you'll get it release day, sometimes even a day early.
14th Oct 2019

Doesn't matter if it's the "worst mode" its appalling that they would give it a console exclusive for an entire YEAR! Like... complete madness.
14th Oct 2019
Thanks, ordered
14th Oct 2019

Everyone is different I guess. If it ends up being the worst mode though, it’s not really worth boycotting for a part of the game you wouldn’t play/enjoy, is it? Just have to wait until release to see if it is the worst mode I guess though. I know some are fans of horde modes so it will be annoying to them to miss out on it.
14th Oct 2019

Xbox are sold out now

Thanks. Have updated the OP.

Appease “Sony” behave yourself, most likely they offered this mode to PlayStation users as Sony probably paid for this content and Microsoft didn’t.

Activision doesn’t give anything away for free without something to gain in return.
14th Oct 2019
Also PS4 and Xbox 1 copies sold out. Deal needs expiring.

yeah if it's similar to the one from MW3, i actually enjoyed it, I like horde modes, I'm not a MP fan at least not with strangers, will see what options if offers in the offline mode, if it has bots, then might be worth getting next year
14th Oct 2019

Yes, Sony have a multi-year deal for exclusive content in Call of Duty that they paid for (same as Microsoft did last gen) and as COD went with free maps and cross play, it was no longer feasible to offer timed exclusives on the maps. That’s why I used the word “appease” as the mode likely offered to still adhere to the current contract of giving something exclusive to Sony so Activision don’t need to return that money they received.
14th Oct 2019
Relisted, so not expired ebay.co.uk/itm…542
14th Oct 2019

I was looking for somewhere that accepted paypal balance and this is the cheapest of the lot. Even if its a day late I dont care I have saved a bit thanks to you
14th Oct 2019
I hate purchasing games over the £40 mark so this is great at £38 😬 thanks
14th Oct 2019

I’m the same. Anything over £40 feels I am overpaying.

I still remember the supermarket price wars back in the day. Pretty sure I picked up Modern Warfare 2 for just £26 from Sainsbury's 😁 They we're all at it back then. I think some started doing the "get COD for £25 if you buy £30 of groceries" thing as well.

Those were the days. Same with Fifa too. Everyone queuing up outside the supermarkets at midnight.

Has £47.95 left your balance? I know of someone having this issue before and when they contacted Paypal, they said it includes the voucher and only the eBay total would be taken.

So it may change?

Right its fixed. Few, I thought the full lot had been taken. I was incorrect.
Thank you both

It's ok, that happened to me when I used an ebay code, you'll only pay £38.36 as Paypal get the money back from ebay.

I thought exactly the same so I gave them a ring...I'm forever on the phone with one Company or another
14th Oct 2019
How are The Game Collection with pre-orders? eBay description says they try and dispatch 1-2 days before, but how true is that? Anyone with past experience pre-ordering with them?
14th Oct 2019

Contact paypal and provide copy of your eBay purchase email, might be they didn’t apply the discount on your order perhaps.
14th Oct 2019

It said on my Paypal account that part had been taken off of my card and part 'Paypal funds' knowing I didn't have any funds in my Paypal I thought it was strange, that's why I rang them and they confirmed you only pay the amount you were expecting and they redeem the money from ebay.