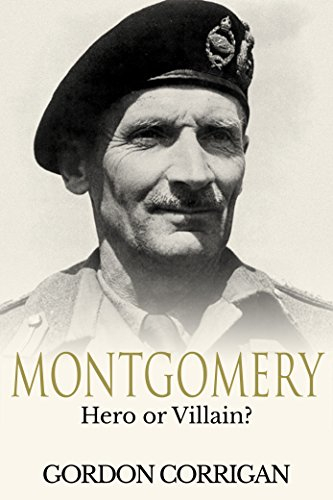 "In the annals of British history the name Montgomery is legend. During the Second World War Field Marshal Bernard Law Montgomery led the British Eighth Army against Rommel’s elite Panzers from August 1942 in the Western Desert until the final Allied victory against German invaders in Tunisia in May 1943. This command included the Second Battle of El Alamein, a turning point in the Western Desert Campaign.

He rose to become 1st Viscount Montgomery of Alamein, KG, GCB, DSO, PC, DL. Like Churchill, he became a superhero. But hindsight is a wonderful thing. And Gordon Corrigan’s bold Montgomery: hero or villain? now asks the unthinkable: does that reputation stand the test of time?

Definitely a hero. I know as my old man, who served under him, told me so.

interesting to get a real opinion, ive only ever read about the campaigns not the men. Obviously Rommel had a lot of respect and probably had the harder job with the lack of fuel. But Monty seemed to make all the right calls.
2nd Jul
Hero Heat
Edited by: "Boz" 2nd Jul
2nd Jul
Shouldn’t even be in question. Very few of us could ever comprehend what those guys went through, me included.:{
2nd Jul

very true
2nd Jul
"An unadulterated hatchet job. Too much criticism without the benefit of detailed analysis which betrays a biased approach to the subject."
2nd Jul

Spot on
2nd Jul
Perspective is needed with Montgomery. Not read this book but while he did many good things he also had some terrible blunders. Universally acknowledged for sparing his troops in the main - absolutely. However some of his Polish and Canadian troops would beg to differ.

I am British, glad he was on our side and think the record is weighted in the positive overall rather than the negative. However there are certainly aspects to his leadership in decision making, attitude towards allies and downright blunders like Market Garden that should temper the complete adulation that surrounds his name.

If you don't agree fair enough but look at the facts not the hearsay.
2nd Jul

What do you expect from 77 page pamphlet. They should pay us to download this garbage.
2nd Jul
Thanks
2nd Jul
Montgomery, like most generals, had highs and lows. El Alamein was a perfect example of waiting till you had number superiority, and excellent use of terrain. Market Garden was unfortunately his vanity project, where he underestimated the ability of the German army. He was very conscious of casualties, which is not always a good trait in a general,where getting the job done sometimes has to supercede losses. Was he selfish and able to alter the facts to suit himself? Of course,but it doesn't make him a bad general overall. He was disappointed to not be supreme commander of Overlord, but as the US was commiting so much in terms of finance, men, and materiels,it had to be an American commander. To accept that Montgomery was flawed, it to accept he was human. Market Garden failed, not because the allied troops were not good enough, but because the Axis troops were still a disciplined and effective fighting force. Montgomerys failing was to ignore that in the hope of a fast, glorious and speedy end to the war.
3rd Jul
My grandad was at Arnhem so I count myself lucky to have ever been born!
3rd Jul

My grandad was at Arnhem so I count myself lucky to have ever been born!

true!
although it was a terrible failure it gave our paras a reputation that continues to this day.
4th Jul

Definitely a hero. I know as my old man, who served under him, told me so.