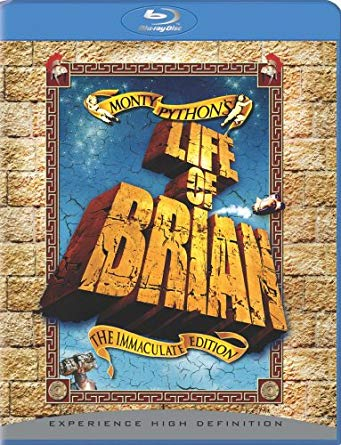 Monty Python delivers the group's sharpest and smartest satire of both religion and Hollywood's epic films. Set in 33 A.D. Judea where the exasperated Romans try to impose order, it is a time of chaos and change with no shortage of messiahs and followers willing to believe them. At it's center is Brian Cohen, born in Bethlehem in a stable next door, who, by a series of absurd circumstances is caught up in the new religion and reluctantly mistake for the promised messiah, providing ample opportunity for the entire ensemble (Graham Chapman, John Cleese, Terry Gilliam, Eric Idle, Terry Jones and Michael Palin) to shine in multiple roles as they question everyone and everything from ex-lepers, Pontius Pilate and haggling to revolutionaries, crazy prophets, religious fanaticism, Roman centurions and crucifixion, forever changing our biblical view.
PostTweetShare Share with WhatsApp Share with Messenger
Community Updates
Amazon DealsAmazon discount code
New Comment Subscribe Save for later
Top comments
13th Feb
One of the greatest films ever made in my opinion.....wouldnt be allowed to released nowadays with the amount of snowflakes in the world!
13th Feb
Biggus.

Utter nonsense. There are far more controversial films released every week. Stop trying to create a culture of oppression where one doesn't exist.
13th Feb
The best comedy ever!
76 Comments
13th Feb
He's not the messiah, he's a very naughty boy!

Thabks OP, haven't watched this in years, time to break out the collection I think.
13th Feb
This is being shown at various odeon cinemas this month.
Edited by: "Hungryhorris" 13th Feb
13th Feb
The best comedy ever!
13th Feb

The best comedy ever!

Yes. I personally think it might be the best film ever
13th Feb
"Alright, I AM the messiah! Now, F#*K OFF!".
Edited by: "SimyJo" 13th Feb
13th Feb
"People's Front of Judea @ the amphitheatre:

The best comedy ever!

I prefer the Holy Grail
13th Feb
Splitter!
13th Feb
One of the greatest films ever made in my opinion.....wouldnt be allowed to released nowadays with the amount of snowflakes in the world!
13th Feb
Biggus.

Dickus.
Edited by: "philbean" 13th Feb
13th Feb
What I wouldn't give to be spat at in the face!
13th Feb
Vue (Westfield Shepherds Bush) have a special showing of TLoB on 19th Feb, 7.15, to celebrate the 41st Anniversary!

May be on at a Vue near you.
Edited by: "bertie.wooster2" 13th Feb
13th Feb
Where's the foetus gonna gestate? You gonna keep it in a box?
13th Feb

This is being shown at various odeon cinemas this month.

I watched it in my local cinema in November. Even though I could act this film, it was even better on the big screen. I even noticed subtleties I'd never seen before like a guy in a white suit walking in the background during Always Look on the Bright Side of Life. 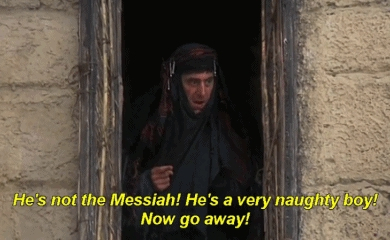 Utter nonsense. There are far more controversial films released every week. Stop trying to create a culture of oppression where one doesn't exist.
13th Feb
This could have been £50 and I'd have still voted it hot. 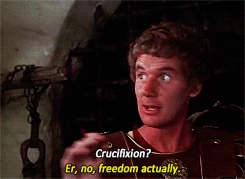 How can you not watch this film and feel better about the world?
13th Feb

You don't know what you're on about.

Precisely the category of people that's dominating the world!
13th Feb
Thanks for posting; we have added this to the Highlights section
13th Feb

"Wouldn't be allowed to be released"

Blesséd are the thick.
13th Feb
Bigus Dickus, He has a wife you know!

Off to watch it again. Heat from me
13th Feb
"He is the messiah. I should know, i've followed a few"!

"Wouldn't be allowed to be released"£4.99 at Amazon.Blesséd are the thick.


great film , watch it every couple of years
13th Feb

Only by the Romans
13th Feb

I think he would have liked that