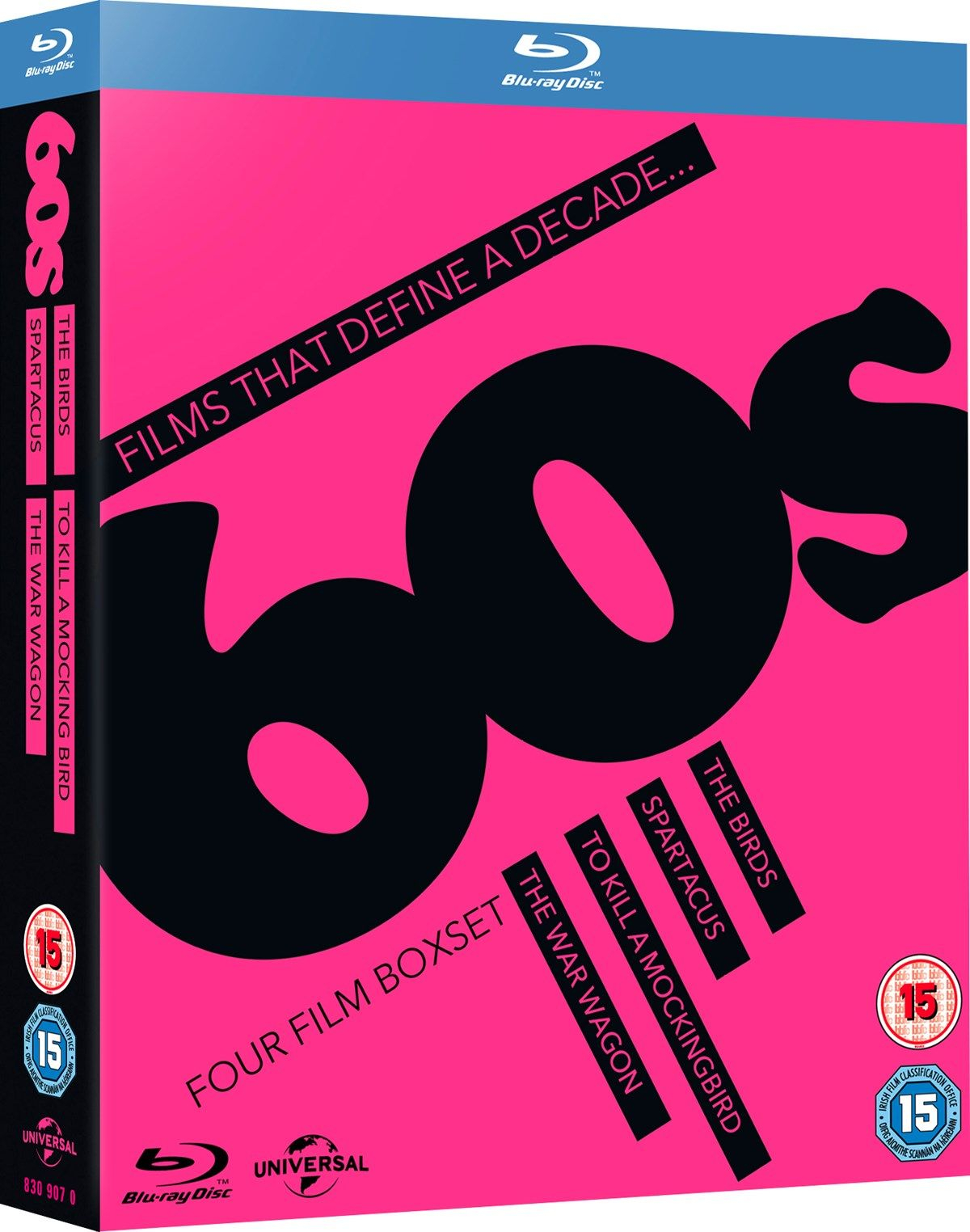 Collection of four classic films from the 1960s. In 'The Birds' (1963) spoiled socialite Melanie Daniels (Tippi Hedren) pursues lawyer Mitch Brenner (Rod Taylor) to his Bodega Bay home after they meet in a bird shop. Melanie sails across the bay to deliver the gift of a lovebird to Mitch's young sister, only to be attacked by a gull on her way back. Soon random attacks on humans are taking place all over Bodega, as birds of all varieties mass in their thousands overhead. 'Spartacus' (1960) stars Kirk Douglas as the eponymous Thracian gladiator, leading the slaves of the Roman Empire in a rebellion against their masters. As the slave army makes its way across Italy towards the coast, the despotic Roman senator Crassus (Laurence Olivier) determines to quell the revolt for his own selfish ends. In 'To Kill a Mockingbird' (1962) Alabama lawyer Atticus Finch (Gregory Peck) is appointed to defend Tom Robinson (Brock Peters), a black man accused of raping a young white woman. The controversial nature of the trial, taking place in the racist culture of the Deep South, leads the local townsfolk to turn against Finch and sees his family become the victim of a series of brutal terror attacks. Finally, in 'The War Wagon' (1967), rancher Taw Jackson (John Wayne) seeks revenge upon corrupt businessman Frank Pierce (Bruce Cabot) who had robbed him of his life savings and his reputation years before. When he discovers that Pierce is hiding a large shipment of gold bullion in an armoured stagecoach, Taw gathers together a motley crew to help him steal it.

Credit to the the 90s deal posted maybe?

Credit to the the 90s deal posted maybe?

What am I missing
10th Feb
@dandoc2 I got what I was missing.i had no idea.when I searched for the 60s deals they were all expired and your one is there but I didn't pay any attention to when it was posted.heat to your deal
10th Feb

No problem not the same deal
10th Feb

No problem not the same deal

I know but still.when @Hungryhorris sent me the first message I thought I done something wrong.which wouldn't be the first time. it's only when you posted your message then I thought I would have a look and spotted it.anyway your film has casino which is one of my faves.heat.
10th Feb

It must have just been a massive coincidence that you posted this deal 15 minutes after dandoc2 posted his .
11th Feb
Excellent price. The War Wagon is out of print on it's own and costs far more to get singular so I bought this despite owning the other 3 already.
11th Feb
A really good find! Nearly spent over £10 for Spartacus alone. Zoom are also doing a good selection of Blurays 2 for 10 (or £9 if you haven't already used the discount code)