Your last chance to buy anything Christmas related from Debenhams!

‌
4th Jan
I'm sure the 25,000 or so people who are going to be out of work soon, appreciate the humour.
4th Jan
still not worth £10
4th Jan
If most people like myself buy the majority of stuff online these days and rarely frequent Debenhams when up until maybe 10 years I would go in once a month or so, it is sadly hardly surprising. The game's changed.
4th Jan

Firm but fair!
4th Jan
Saw plenty in Debenhams but problem is that all the contents expire before next Christmas and so really of no use if needs to be kept as a Christmas present.
4th Jan

I bought a hamper like this last year, the preserves and jams generally have 2 years expiry.
It’s just the cookies that go out of date...
So still make a great hamper if you remove the biscuits from them.
5th Jan
Not a fan tbh even at this price, haven't voted
5th Jan
These are very nice chutneys and preserves . My mum usually gets me a set every Christmas. Bought as a treat to myself.
5th Jan
John Terry is getting hungry
5th Jan

John Terry is getting hungry

Think that was miss perroncel
5th Jan
When a picture is so out of focus you feel drunk
5th Jan
Ordered £50 of sale stuff for presents for multiple birthdays and mothers day coming up. Bought some last year and jars were 2022 dated,
5th Jan
Not worth the cash amount.
5th Jan

This is what I’ve done. I’ll give the cookies and shortbread through the year as birthday gifts or Father’s Day gifts etc... and keep the jams and chutney for Christmas.
5th Jan
Out of stock
5th Jan

Yep and who the cluck is Mrs Bridges anyway ffs

Mrs Bridges… Cook… or Kate to a very select few, began her life ‘in service’ as an under cook to ‘respectable’ families in the countryside of Victorian England. From those early days, she began collecting recipes - or receipts as they were then called - and her repertoire spanned from simple country cooking, to dishes in the fine French fashion. Kate Bridges earned the honorary title of ‘Mrs’ Bridges when she became Cook to one of the leading Edwardian families, and London socialites, Lady and Richard Bellamy. During her time at 165 Eaton Place, London, SW1, Mrs Bridges devised elaborate menus and cooked for some of the leading figures in the capital including the Monarch King Edward.

Mrs Bridges collected her receipts for dishes which would grace regal banquets - as well as ‘below the stairs’ suppers. Inspired by the works of Mrs Beeton - and encouraged by her employer Lady Marjorie - Mrs Bridges drew her receipts into a book called "Practical Household Cookery" which was published in 1905.

Mrs Bridges was immortalised in the long running 1970's series ‘Upstairs Downstairs’ where, along with the Butler Mr Hudson, she reigned ‘downstairs.’

Although few copies of her original book "Practical Household Cookery" survive, today the spirit of Mrs Bridges lives on in the range of fine food gifts.

Mrs Bridges immortalises British heritage and tradition in a jar. This quintessentially British range of fine foods and gifts is made using the finest ingredients. With over 150 individual products and a selection of seasonal gift packs and hampers, Mrs Bridges is the perfect choice for food gifting.

The signature jars shape, exclusive to Mrs Bridges, combined with the traditional mop cap and bow add a touch of luxury to every product.
6th Jan

Back in stock.
6th Jan 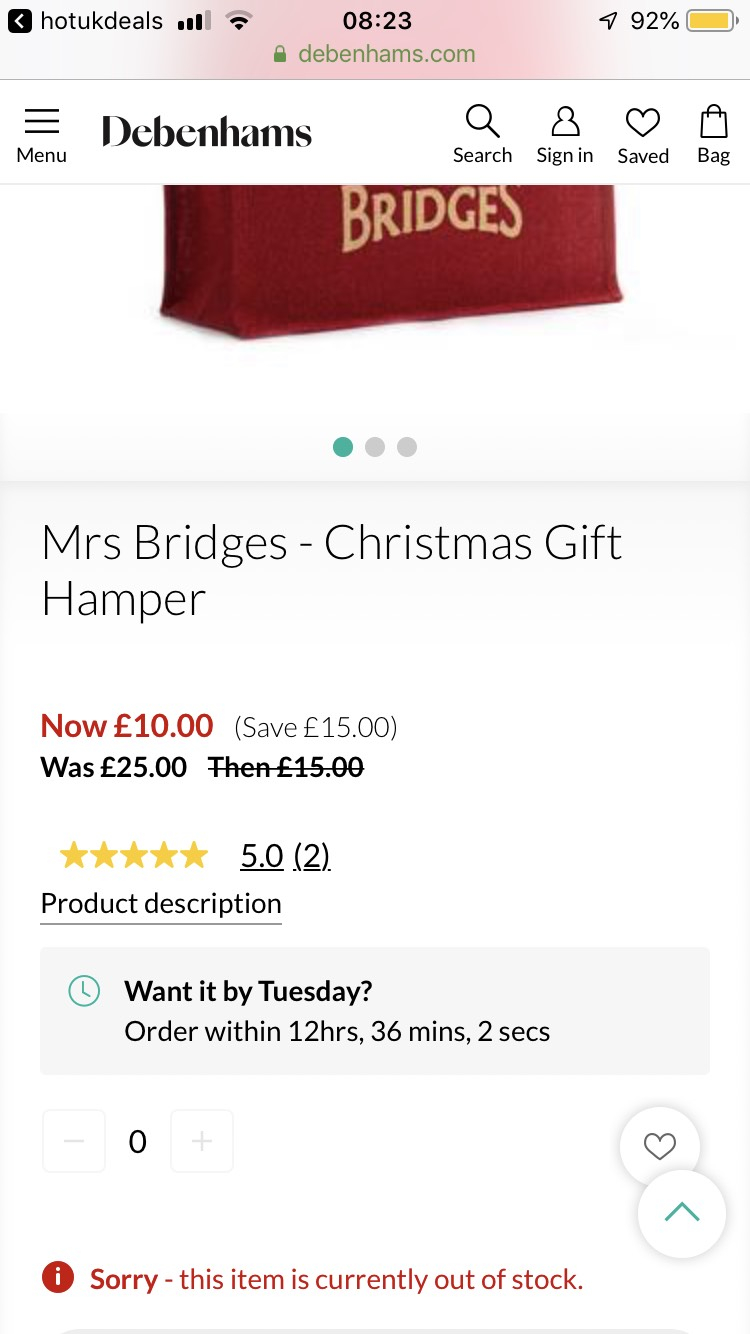 I ordered 2 hours ago.
6th Jan

I ordered 2 hours ago.

I’ve just checked again and out of stock 😔 think you may just have fallen lucky!
7th Jan