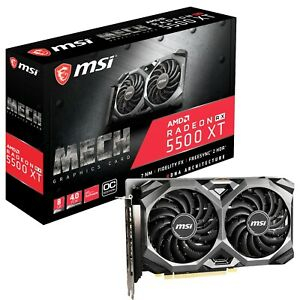 So here we have a MSI Radeon RX 5500 XT which from CCL direct is £199.00,
scan is coming up at £197 both excluding postage cost, meanwhile amazon £199 with free postage for prime members.

So a little saving over the above ways.....

as for comparable to the rest of the 5500xt the only ones available cheaper are the 4GB versions CCL do have the 8gb powercolour for only £179 but its not instock atm, and elsewhere that card is at scan for £199 +£10 delv instock

so looks like to me the cheapest 8gb 5500XT but defo this version,

my experience of this card is: ZERO.

My experience of MSI cards: High, and favorable card.

Is this a deal for today: agreeable,
worthy and comparable to the RX590: NO

make your own mind up.

Consensus is this card was priced too high on release.
Not all stock has appeared yet. Most of the different AIB cards have not reached the shops yet. :shrugs:

Wait for a Sapphire or Gigabyte offering.
23rd Dec 2019
Read something about these performing better on X570 due to PCIE 4. Not sure what the truth is, didn't seem to matter on the 5700 series.
23rd Dec 2019
I would go for this and save some cash

Some German sites stated 10-20% better performance,but Hardware Unboxed did the testing and the performance increase is only about 3% at 1440p,no difference in 1080p.
24th Dec 2019

What about ram - gddr5 vs gddr6? Thanks.

Ram is faster but it is 128bit bus against 256bit bus at Polaris.