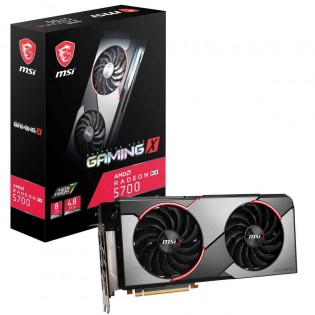 Seems to be a nice low price on this

AMD have launched their latest Graphics Cards the Radeon RX 5700 Series, the new cards are based on the new RDNA Architecture and now include 8GB of GDDR6 Memory driving the card with a high bandwidth of up to 448GB/s. Game at 1440p performance on today's most demanding titles with ease and with the new architecture you can run your card faster with lower power consumption than ever before. The RX 5700 series features new PCI Express 4.0 support with a throughput of 16GT/s and enables two times the bandwidth compared to PCI Express 3.0. By choosing a monitor with FreeSync and combining it with an AMD card of this caliber the results will be a stutter-free, tear-free and artifact-free smooth gaming experience.

A Stable and Silent Gaming Experience

The 7th generation of the famous MSI TWIN FROZR Thermal Design brings the most advanced technology for ultimate cooling performance. It features the new TORX FAN 3.0 combined with ground-breaking aerodynamic feats. This means stable performance and a silent experience are guaranteed thanks to low temperatures.

A brand-new version of the iconic MSI TORX fan pushes the limits of thermal performance yet further than before. The new trims clearly visible on the traditional fan blade create a focused airflow which in turn is pushed down by the dispersion fan blades for increased static pressure.

First introduced in 2008 by MSI, ZERO FROZR technology stops the fans completely when temperatures are relatively low, eliminating all fan noise when no cooling is needed. When the heat is on during gaming, the fans will automatically start spinning again to keep your powerhouse cool.

Gain a performance boost to your system

MSI Afterburner is the world's most recognized and widely used graphics card Overclocking software. It gives you full control of your graphics card and enables you to monitor your system's key metrics in real-time. The latest version of MSI Afterburner features OC Scanner for RTX 20 series graphics cards. OC Scanner is an automated function that will find the highest stable overclock settings for your card. Giving you a free performance boost for a smooth in-game experience thanks to higher FPS.

Control to Showcase your style

Eventually Dragon Centre will be the only MSI software you need to install for full functionality of your MSI Desktop, Graphics Card, Motherboard or even Gaming Gear. Thanks to a modular concept, the application will automatically detect new MSI hardware once added. Based on the hardware in your system it will offer the relevant software drivers for your specific setup.

Keep eyeing up graphics cards to replace my gtx 980

I was about buying this card, but they don't deliver in France..
16th Apr

Keep eyeing up graphics cards to replace my gtx 980

Im in the same boat. Thinking of doing a a full upgrade on my rig though!
16th Apr

Im in the same boat. Thinking of doing a a full upgrade on my rig though!

Its always tempting, i upgraded a bit last year, currently using the r5 2600, which i don't feel like i need to upgrade yet
16th Apr
Does it definitely come with the freebies? Couldn't find that on their site?
16th Apr

It's most likely they will do something similar to the 5500, 5600 and 5700 so I guess so but nothing concrete yet
16th Apr
Is this a misprice, auto price matched the awd one?
technextday.co.uk/msi…g-x
16th Apr

Thatll be some upgrade!
16th Apr
cheers, maybe I'll wait for that then. Looks like it is out of stock now anyway
16th Apr

Thatll be some upgrade!

Heres hoping the prices dont keep going up 🙈
16th Apr
Out of stock
16th Apr
This with flashed bios will do wonders!!!
16th Apr
Really cheap nice find.
16th Apr
Let's hope no noobs bought the card lol, flash it to an 5700 XT and under volt the card + increase the core/memory clocks. Serious value for money. You could also punt both games for £30

Edit: found a link, it's definitely worth it 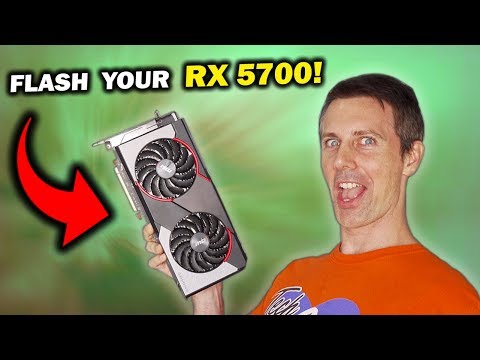 Who put the wrong sauce on your donner kebab? 😁
16th Apr

Who put the wrong sauce on your donner kebab? 😁

Unfortunately not had a kebab in a long time. Wouldn't touch donner though, all about the shish.

Yeah it seems like everyone has encountered an issue with the line up, some very minor and some major. HDMI audio on My gigabyte rx 5700 xt is completely broken (bad drivers) I had to pull out my old sound card and use an optical cable connected to my tvs sound bar. Did you rma it?
16th Apr
Great price OP on one of the better 5700's but why risk a flash when you can use morepowertool?
Edited by: "geekfusion" 16th Apr

I received it yesterday afternoon, can't even get pass the windows logo on start up as it comes up with bad system config info. Only happened when I went to update drivers through radeon adrenalin. Hopefully factory resetting the sdd with windows on it will do the trick.
16th Apr
£282 on ebay/ebuyer for those who missed

As far as I know the morepowertool needs to be re-set every time you update the graphics drivers.
Bios flash is “permanent”
16th Apr

Not sure I get you.

1. Flash it to a 5700XT bios.
- yea ok, though would prefer to use morepowertools as reversible and not affecting warranty (5 second job after updating software). But fine.
2. Under volt card and increase memory clock.
- this doesn’t really make sense. If first you overclocked to where you want to get to (higher clock than standard 5700 or why use XT bios?) then reduced voltage as far as you can on that higher clock setting then unless it is the mildest overclock ever (not worth it) then you would not be undervolting at all compared to original voltage. You are not going to exceed the boggo clocks on less volts than standard by any margin if at all. It’s a choice - undervolt and have less heat, noise, wear etc, or ramp up clocks to desired extent whilst minimising additional voltage.
17th Apr
For those who get the card and playing at 1440p,
1. Manually overclock to get about 5% increase in real world fps
2. Undervolt and increase the clock to get about 3% at lower fan speeds, lower noise and lower power draw.
3. Load xt bios to get about 8% max qt significantly higher temps, power draw and noise and voiding the entire warranty in the process.
In my opinion the bios flash is completely not worth it because you get only an extra 1 fps increase at 1440p, playing at high settings over manual overclock. Just undervolt and increase the clocks to get a little boost without risking anything.
Edited by: "Wall-E" 17th Apr
17th Apr
Anyone had confirmation yet?
17th Apr

Anyone had confirmation yet?

Status still says "processing" for me. Wonder if it's going to get cancelled like the ones from cclonline
17th Apr

That's what I think will happen
17th Apr
Mine is still stuck on processing too. Can't see these being honoured at this price with the CCL ones being refunded.
17th Apr
Refunded with an email claiming out of stock and end of life so won't be getting any more.
17th Apr
Yeah mines just been refunded too. Guess the waiting game continues
17th Apr
Yup. In the refund club. Not surprised.
17th Apr