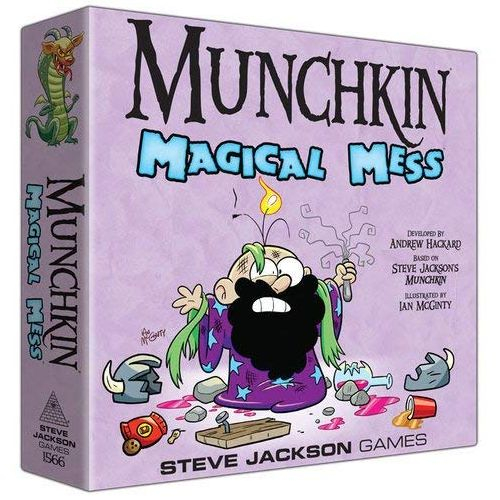 I have been wanting to buy one of the Munchkin sets for a while but they are infamously expensive. I have seen this version for £30 online elsewhere.

It is a humorous (seriously silly dad jokes and puns), light-hearted card/board game that all the family can play together. It comes in many different varieties/genres from the original version (fantasy) to zombie, Mission Impossible, X Men, Sci-fi or Cthulhu versions (and many more).

I was looking for a 'full' version (rather than an expansion) and this set fits the bill. It is also a 'deluxe' version meaning that as well as the cards you get a board and Zatu is WAY cheaper than anywhere else for niche games but you will have to pay a 2.99 delivery fee, so while I was at it I bought the Munchkin Cthulhu 3 expansion pack for £3.49 instead of £8.67.

Once you have a base set like this you can buy any expansion Munchkin set in any genre and add it in or even add another base set. All of the Munchkin genres are compatible with each other (but not CCG, Quest, etc) so the Cthulhu expansion cards I bought can be shuffled in with the Magical Mess set and so on.

Yes, you may now call me a geek! (but don't knock it until you've tried it) ...and to the serious board-gamers out there, yes I know that Munchkin is looked down upon but for a 1-2 hour game for casual players wanting a laugh over a few beers it is just the ticket.

Zatu has excellent reviews and it is SO refreshing to be able to support a small independent retailer (based in Norwich) that is actually cheaper than Amazon!
PostTweetShare Share with WhatsApp Share with Messenger
Community Updates
Zatu Games Deals
If you click through or buy, retailers may pay hotukdeals some money, but this never affects which deals get posted. Find more info in our FAQs and About Us page.
New Comment Subscribe Save for later
9 Comments
20th Dec 2019
Good price, but out of stock now, I'll check back some other time. Thanks.
20th Dec 2019
I just want to add that I ordered a game from this retailer yesterday and the item arrived today. Very impressed. Thank you Zatu Games.
20th Dec 2019

Zatu tend to be one of the cheapest and have great customer service. Just have to remember to add delivery on though
20th Dec 2019
Is Steve Jackson the guy who used to writes those books?
20th Dec 2019

Is Steve Jackson the guy who used to writes those books?

No it's not! Apparently there are two Steve Jackson's. This is the American one. The British one founded Games Workshop and wrote the books but this one wrote three of the book! Confusing!
20th Dec 2019

You are joking. They use the same style of script for his name and everything. Very odd. Learn something new every day
21st Dec 2019

Good price, but out of stock now, I'll check back some other time. Thanks.