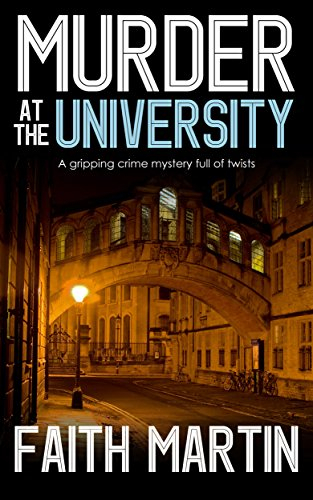 417 ratings Scores average 4.5 Out Of 5.
Paperback is £7.99
Perfect for fans of Agatha Christie, Colin Dexter, or Ruth Rendell.

MURDER AT THE UNIVERSITY is the second in a series of page-turning crime thrillers set in Oxfordshire.

Looking for a brilliant murder mystery with a feisty female detective?

MEET DI HILLARY GREENE, A POLICE WOMAN WITH A THIRST FOR JUSTICE AND A CAREER ON THE ROCKS

A pretty French student is found dead in her room at an exclusive Oxford college. Everyone thinks it is another tragic case of accidental drug overdose.

But Detective Hillary Greene has a nose for the truth. She quickly discovers that the student was involved in some very unusual activities.

With a shocking cause of death found, the case becomes a high-profile murder investigation.

Adding to the pressure, Hillary’s nemesis is transferred to work with her at the station.

Can Hillary keep her cool and get justice for the unfortunate student?

This is a crime mystery full of well-observed characters, which will have you gripped from start to finish.

MURDER AT THE UNIVERSITY is the second in a series of page-turning crime thrillers set in Oxfordshire.


THE LOCATION
Oxford is a city of two halves — town and gown. In the town, you have Cornmarket street full of shops and shoppers that could be found in any city in the country. But Oxford's 'dreaming spires' are the real draw for the tourists, romantics and those with intellectual aspirations to wear the gowns of students and dons. In centuries-old quads, croquet can still be played on lawns as smooth as velvet. Here, 'New' College's walls are actually over 500 years old, and Cotswold stone gleams in even the wateriest of winter sunlight. A city of bicycles, with undergraduates (and fellows) flapping about in faded, black gowns; the Martyrs’ Memorial, and fabled inns where the likes of J.R.R Tolkien sat and wrote about a Hobbit who lived in a hole in the ground. Everywhere you turn, you see history staring back at you. And of course there has always been murder!

DI Hillary Greene
An attractive woman in her forties, Hillary Greene is a police officer of many years’ experience, and came up through the ranks. Consequently, she knows how the system works, and is fiercely loyal to the force without being blinkered to its faults. She is a long-standing friend of her immediate superior officer, 'Mellow' Mallow and enjoys a rather enigmatic relationship with the steely Superintendent Marcus Donleavy. Popular with the rank and file for her no-nonsense attitude and competence.

PostTweetShare Share with WhatsApp Share with Messenger
Community Updates
Amazon DealsAmazon discount code
New Comment Subscribe Save for later
11 Comments
18th Jan
Wonder if the rest of the book is as hilariously clunky as the title?
18th Jan