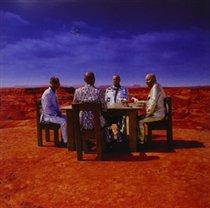 Cracking album and cracking price. Sign up to the Newsletter and you'll get a 10% code to get it even cheaper too.
The fourth studio album bu the English rock band, originally released in July 2006. Recording was done in a four-month span and was split between New York and France. It also marked the first time the band took a more active role in production. 'Black Holes and Revelations' saw a change in style from Muse's previous albums, and the band cited influences that included Depeche Mode, Millionaire, Lightning Bolt, Sly and the Family Stone, and music from southern Italy. Features the singles 'Supermassive Black Hole', 'Starlight', 'Knights of Cydonia', 'Invincible' and 'Map of the Problematique'.