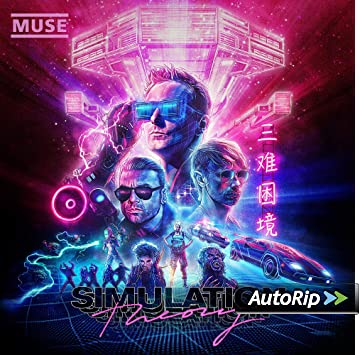 £4.49Amazon Deals
Expert (Beta)4
Get deal*Get deal*
Expert (Beta)
4Get deal*Get deal*
Posted 21st May
"Muse have announced that their eighth studio album, ‘Simulation Theory’. The eleven-track record was produced by the band, along with several award-winning producers, including Rich Costey, Mike Elizondo, Shellback and Timbaland. Muse is Matt Bellamy, Dominic Howard and Chris Wolstenholme. The Deluxe CD includes 5 bonus tracks and is a Digipack."
PostTweetShare Share with WhatsApp Share with Messenger
Community Updates
Amazon DealsAmazon discount code
New Comment Subscribe Save for later
4 Comments
21st May
Love this album. I’m sucker for old school synth sounds.
21st May
This album is freeon the Amazon Music app if you have prime.
21st May

This album is freeon the Amazon Music app if you have prime.

I mean, yea, but it's 'free' like Spotify music is free. I know it's not as common anymore, but I really like to own my music still.
21st May
Good album good price but not as good as drones