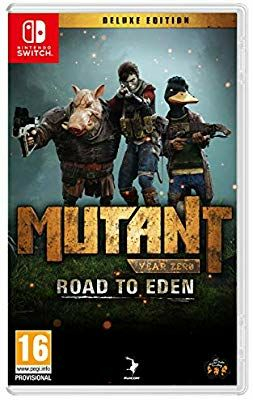 Out of stock now at most sites.

TACTICAL STRATEGY EVOLVED
Jump between real-time exploration and a deep, tactical combat system at will.

EXPLORE A POST-HUMAN EARTH
Journey through a world of abandoned cities and an overgrown countryside as you unravel the story of what happened to our earth.

CONTROL A TEAM OF MUTANTS
Talking animals and other mutants – these aren't your typical heroes!

MASTER THE STEALTHY APPROACH
Real-time stealth allows you to sneak into enemy camps set up ambushes.

UNLOCK MUTATIONS
Shape your characters by giving them unique mutations such as Stoneskin, Moth Wings, Hog Rush or Corpse Eater.

DYNAMIC ENVIRONMENTS
Stay out of floodlights, hide from line of sight, or just blast down walls and create havoc!
PostTweetShare Share with WhatsApp Share with Messenger
Community Updates
GAME DealsGAME discount code
If you click through or buy, retailers may pay hotukdeals some money, but this never affects which deals get posted. Find more info in our FAQs and About Us page.
New Comment Subscribe Save for later
6 Comments
28th Nov 2019
Great game and definitely worth it at this price. I'll not lie, the graphic on the Switch are fuzzy as all hell but at no point did I find it diminished my enjoyment from start the finish.

Highly recommended if you have even the slightest inclination towards Turn-Based games.
28th Nov 2019
Heat. Great game n good price
28th Nov 2019
Only played this on Xbox but imagine this would be a great handheld game .

Absolutely loved it. Worth every penny
28th Nov 2019
Thanks op, reserved it for store collection just in case its cheaper elsewhere for tomorrow's Black Friday.
28th Nov 2019
Absolutely excellent game. Was gripped by it from start to finish. Played it on ps4 but ordered again! Cant wait to play portable! Perfect game for buffing out your switch collection. Especially at this price!!
28th Nov 2019
I've now asked my wife to lock all my cards away.