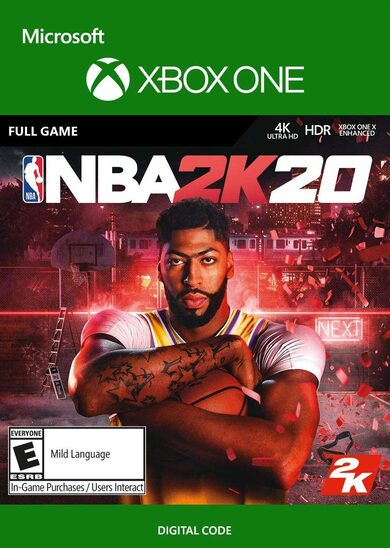 NBA 2K20 (Xbox One) Xbox Live keyAnthony Davis graces the cover of the game and marks another milestone for the franchise. Building and improving on all the games that came before it, NBA 2K20 will not disappoint returning veterans nor newcomers to the series. Buy NBA 2K20 key now and see for yourself!

Steps towards the futureI
mprovements are all over this game. The way the ball is being handled was… well, handled! As in, the developer worked on improving the existing system, making sure the ball action will not be as whimsical as previously, also giving the player more control over the court and strategy, leaving little to chance. Additionally, a well-known member of the 2K fan community, R4zoR, ended up in the company’s employ, working on the graphics aspect of the game. Nothing but the best for the fans!

Improve at your own pace
Buy NBA 2K20 key and start your career. With the huge roster of both professional and rookie players might astound, and in order to ‘catch-them-all’, you will have to give your time and dedication. However, the reward is definitely worth it. And there’s no need to run without a goal in mind. The returning Neighborhood mechanic will allow for some to take it slow and learn the game; while others will get the help they need to get ahead. The feature is promised to be big and will not let the aspiring players down, so buy NBA 2K20 key and explore the new stomping grounds – if you need a new pair of sneakers or a court all to yourself, the Neighborhood is the place to go.

Dedication is the driving force
2K gives all they can to supply the player with smooth and easy gameplay. Many of the features from the previous games have been improved upon, while some elements have been added to enhance the experience. Among them is the new dunking action, accomplished by the motion capture technology. IK (inverse kinematics) also plays an important role in bringing new layers of realism to the series.
PostTweetShare Share with WhatsApp Share with Messenger
Community Updates
Eneba Deals
New Comment SubscribeSave for later
1 Comment
6th Aug
If you have NBA2K19 do not bother, it's exactly the same game.