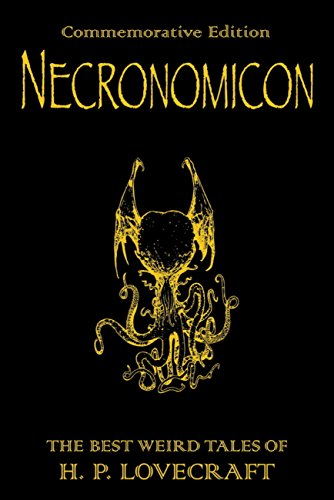 H.P. Lovecraft's reputation has grown tremendously over the decades, and he is now commonly regarded as one of the most important horror writers of the 20th century, exerting an influence that is widespread, though often indirect. His tales of the tentacled Elder God Cthulhu and his pantheon of alien deities were initially written for the pulp magazines of the 1920s and '30s. These astonishing tales blend elements of horror, science fiction and cosmic terror that are as powerful today as they were when they were first published.

THE NECRONOMICON collects together the very best of Lovecraft's tales of terror, including the complete Cthulhu Mythos cycle, just the way they were originally published. It will introduce a whole new generation of readers to Lovecraft's fiction, as well as being a must-buy for those fans who want all his work in a single, definitive volume.
PostTweetShare Share with WhatsApp Share with Messenger
Community Updates
Amazon DealsAmazon discount code
If you click through or buy, retailers may pay hotukdeals some money, but this never affects which deals get posted. Find more info in our FAQs and About Us page.
New Comment Subscribe Save for later
3 Comments
6th Dec 2019
Thanks
6th Dec 2019
Brilliant collection and great price but this really deserves being bought in the weighty tome that is the hardback version.
7th Dec 2019
Gone back to £3.99