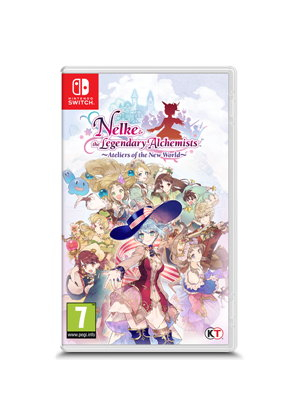 Nice pricedrop. I'm actually playing through it right now and it is quite addictive, had a hard time putting it down to play some Pokemon Sword. It's a fun city builder / management type of game with lots of references to Atelier titles, but you don't need any prior knowledge of the series to enjoy it whatsoever.

Nelke & the Legendary Alchemists: Ateliers of the New World puts players in the shoes of Nelke von Lestamm, a young noblewoman who has always been fascinated by the ancient legend of the Sage of Granzweit; a tale of the Granzweit Tree which is said to bestow great power upon those who discover it. As she grew up and learned her skills were not in alchemy, she studied hard to become a government official and help those around her. The day Nelke is set to graduate the academy, however, her life changes forever as she hears a rumor that the tree can be found within her father’s lands near the small village of Westwald. Her father grants her permission to search for it on one condition – that she becomes governor of the area and develops Westwald into a prosperous city.

As players work hard to build Westwald up from a quaint village to a flourishing city, they will require the aid of the many alchemists that settle in the town. Nelke and the Legendary Alchemists: Ateliers of the New World features famous alchemists from previous entries across the Atelier series, including those from the Salburg, Arland, Dusk, and Mysterious trilogies.
PostTweetShare Share with WhatsApp Share with Messenger
Community Updates
Base.com DealsBase.com discount code
If you click through or buy, retailers may pay hotukdeals some money, but this never affects which deals get posted. Find more info in our FAQs and About Us page.
New Comment Subscribe Save for later
1 Comment
6th Dec 2019
Cheaper here ‌ thegamecollection.net/nel…e37