Versatile Item Finder: keep track of the items that matter most, find your keys, wallet and more with the AirTag bluetooth item finderSimple Set-up: a one-tap setup instantly connects AirTag with your iPhone or iPad. Enter a name for your AirTag, attach it to the item you want to track and you’re good to goPing it. Find it: Play a sound on the built-in speaker to help find your keys and other things, or just ask Siri for helpPrecision Finding: If your AirTag is nearby, your iPhone can lead you straight to it using Precision Finding. You’ll see the distance to your AirTag and the direction to head all thanks to Ultra Wideband technology (compatible with select iPhone models)Find Items Further Away: with the help of hundreds of millions of Apple devices in the Find My network you can track down your AirTag and it is designed to protect your privacy every step of the wayLost an item: Lost Mode makes finding things even easier. Just like your other Apple devices, AirTag can be put into Lost Mode. Then when its detected by a device in the network, you’ll automatically get a notification.Long Battery Life: designed to keep going for more than a year on a standard battery with 1 x CR2032 battery included which can be easily replacedPrivacy Built In: All communication with the Find My network is anonymous and encrypted for privacy, Location data and history are never stored on AirTagWater resistantWhats In The Box - Apple AirTag

Beautifully simple.
A one-tap setup instantly connects your AirTag with your iPhone or iPad. Enter a name for your AirTag, attach it to the item you want to track and youʼre good to go. Want AirTag notifications on your Apple Watch too? No problem.

AirTag is designed to discourage unwanted tracking.
If someone else’s AirTag finds its way into your stuff, your iPhone will notice it’s travelling with you and send you an alert. After a while, if you still haven’t found it, the AirTag will start playing a sound to let you know it’s there.
Of course, if you happen to be with a friend who has an AirTag, or on a train with other passengers who have AirTag, don’t worry. These alerts are triggered only when an AirTag is separated from its owner.

Long live the battery.
AirTag is designed to keep going for more than a year on a standard battery you can easily replace.2 And your iPhone lets you know when itʼs time to pop in a new one.

Splish, splash.
Let’s say you’ve tagged your keys and — oops — you drop them in a puddle. Or they’re in the path of a colossal spill. Well that’s OK. Your AirTag is water resistant

Cold. Warm.
Warmer. Hot.
If your AirTag is nearby, your iPhone can lead you straight to it with Precision Finding.1 You’ll see the distance to your AirTag and the direction to head in — all thanks to Ultra Wideband technology.


Precision Finding is compatible with: 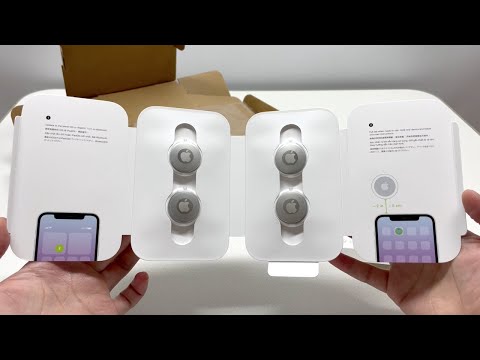 Tips and Trick / How To Use