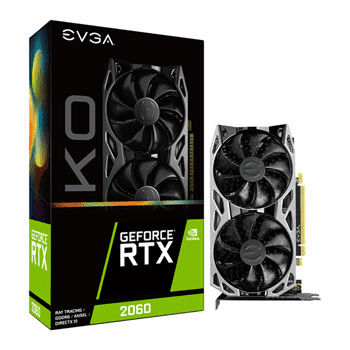 we have the 5600xt incoming "redone" which is suppose to be competing with this now, at around this price maybe £15 init.

but then we have the blower 5700 when ebay/ebuyer do its magical 8% discount but we call it 20% discount and comes down to this price. so do we need this 5600xt its debatable; i would pref the 5700 to just drop more and knock them all out the water and have done with it, and bring on the 5800xt!

either way, this hot for its new card at the new 2060 prices for NVIDIA fans.

itll be interesting to see folks comments. whats your thoughts?
- the reason i mentioned 5600xt cos it will be mentioned below anyways..
PostTweetShare Share with WhatsApp Share with Messenger
Community Updates
Scan DealsScan voucher codes
New Comment Subscribe Save for later
Top comments
20th Jan
If you don’t need a new gpu I’d hold fire. Within 6 months you’ll have the 3000 series Nvidia released and possibly amd big navi
29 Comments
20th Jan
There won't be a reference 5600 XT afaik. This really should've been the price of the 2060 since the 5700 series hit but its Nvidia so don't expect reasonable pricing.

Personally I'd wait until the 5600 XT reviews come in (tuesday) and then wait a few days to see how pricing adjusts. But considering how close the 5700 is in price relative to the performance that is just a better buy if you can hold out until the usual ebay codes drop them sub 290.
Edited by: "3anana" 20th Jan
20th Jan
Think people should wait for the main reviews and prices.
Competition is good though, but they will find out how EVGA makes it cheaper and what they trade offs are.
Still time for AMD to lower theirs.
20th Jan
If you don’t need a new gpu I’d hold fire. Within 6 months you’ll have the 3000 series Nvidia released and possibly amd big navi
20th Jan
Apparently, there's some debate as to if this price is permanent or if it'll go up to £299 once the dust settles with the 5600.
20th Jan
Great price on this now the Rx 5600xt is dead on arrival
20th Jan

How do you know that before it's review reveals ? Are you using a crystal ball?
20th Jan
Good price but I'd personally hold fire on a GPU, they're going to drop considerably between now and Christmas.
20th Jan

Yes it's called rushing emergency bioses to manufacturers to boost performance if that's not desperation I don't know what is, don't ever recall them having to do that before which could also mean that first batch of 5600xt could have issues
20th Jan

Have you even read why they did it, or you just assumed? They expanded power envelope of GPU => higher clocks, as a response to Nvidia dropping price to RTX 2060. It's just a competition between 2 companies.
20th Jan

Things are always going to drop in price, there is always something new just around the corner.....and so on.

If the price point matches what someone is willing to pay now for a new GPU then go for it. Otherwise you will just be waiting forever.
20th Jan

Some fanboys just want one company to win but this mid range battle is great for the consumer, hope the battle continues.

Do feel bad for the reviewers who now have to rerun all their benchmarks though.
20th Jan

I totally disagree on this occasion. AMD prices are set to fall dramatically by the end of the year, and Nvidia will follow suit. I'm not talking about the usual price drops we see over the space of a few years or more, but a massive drop in price. This doesn't mean you have to spend less in several months or more, but you will be able to buy a much more powerful card than this for the same money. Each to their own, but unless you're desperate then this is a bad time to be upgrading.
20th Jan

Why will they drop? There are always new cards getting released, there is never some massive drop in price when this happens. There is always some more powerful card coming out.

What is different this time round compared? Asking honestly.
20th Jan
I think what he means is that with release of new ps5 and Xbox on rdna 2 arch. will cause change of what kind of power is needed to play like on console and hence will increase competition on the markek + Intel is starting to make GPUs => more competition. And ray-tracing (whatever implementation will be) is getting more and more common
20th Jan

If you follow the news, it's all to do with new RDNA 2 hardware on the horizon and specifically, next generation consoles. Leaked AMD specs for PS5 and specifically Xbox Series X are said to be huge. Sony and MS have said that they will be charging more than usual for their consoles, and are slated to be using high powered RDNA 2 chips with built in ray tracing. It's expected that the Xbox console will be running over 12TF Navi 2 hardware, and will be in the ball park performance wise to a 2080ti. According to all reports I've read, AMD will slash the prices of their graphics cards or no one will buy them. They will obviously be bringing out some beasty new Navi cards for gamers who are willing to pay the money for them, but current gen hardware will take a significant drop in price. Nividia will have no option but to follow suit on current gen cards or lose out to AMD. It's great news for gamers of all platforms in fairness.
20th Jan
a little prediction here based on some searches... (ebuyer/ebay discounts if a 20% comes along..

meanwhile theirs some nice floating 1660 non supers.. atm which after codes should fall right bang on the price of the Rx590 at the £160 mark..

a little prediction here based on some searches... (ebuyer/ebay discounts …a little prediction here based on some searches... (ebuyer/ebay discounts if a 20% comes along..the palit 2060 1 fan version... should hit £242... after discount subject to no price hikes so expect this around £250 cheers ebay! rest of the available lists on ebay of the 2060 should fall around the 270/280 back to this KO version then in price... so the palit 1 fan is gonna be a nice steal.. as for the 1660 supers via the code!...... dont count on it.... zero lists - removed.. meanwhile theirs some nice floating 1660 non supers.. atm which after codes should fall right bang on the price of the Rx590 at the £160 mark.. and the typical 5700 looks likes its gonna be back at that £260... mark again... when it drops who knows but is something to consider for new buyers interested... hang fire for deals.. get the Ko 2060 or see whats this 5600xt is gonna do.

I think Rx 5600 is going to be a controversial offer. As from 1 hand it's pretty much rx5700 core, but bandwitch starved => memory overclock will be a must. And from leaks it has 48 ROPs (that's from leak, so might be wrong) Vs 64 in Rx 5700. In some games that are not bandwidth sensetive you'll see min difference, while in other ones you'll see quite massive difference. But anyway, it'll still gonna be able to trade blows, or even be better than RTX 2060
Edited by: "xxkichaxx" 20th Jan
20th Jan

That's what I'm doing. I figured they'd last longer and with the new consoles supporting RT, more games will prob make more use out of RT and the hardware. However I also don't expect miracles regarding pricing unfortunately. Of course if you do need to upgrade, then you can also forever be waiting for new stuff to come.
Edited by: "frish" 20th Jan
20th Jan
Is this faster than the 2060 super?
20th Jan

Have a look here, they claim the Super is 12% quicker, but much higher price for the 12% benefit.
gpu.userbenchmark.com/Com…034
20th Jan

Yeah that's graphics cards for you, once you get past an RX 570 it's all diminishing returns.
20th Jan
I don't know if this has always been the case, but it's preorder only now.
Available 31st Jan 2020.
20th Jan

I'm hoping we see more drops in the RTX range later today.
23rd Jan
FYI this card is a binned 2080/2070 Super (TU104)! No better for gaming than a normal 2060 but for various professional workloads it's far better.