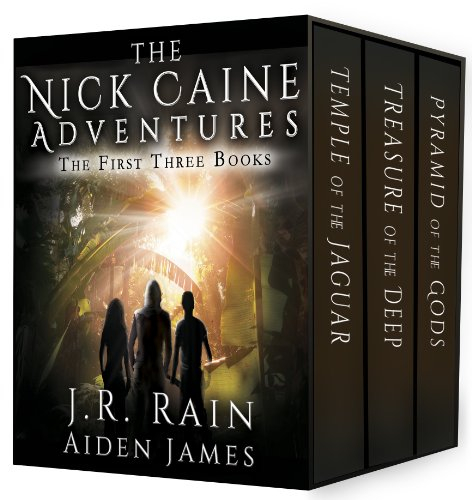 There's currently eleven books in the series, only the first three are free.

The first three novels in the bestselling Nick Caine adventuress series, including:

TEMPLE OF THE JAGUAR
Nick Caine is a part-time archaeologist and full-time antiquities thief―a looter. And a very good one, too. So good that he catches the attention of the beautiful Marie Da Vinci, who offers him the chance of a lifetime: to locate the legendary Ciudad Blanca. The lost White City. A city purportedly filled with riches beyond belief. Against his better judgment, Nick agrees to help...and soon finds himself on a trail into the unknown. And close behind is someone who will stop at nothing to beat them to the prize. Nick Caine, of course, has a few surprises up his sleeve. After all, he's no ordinarily looter.

TREASURE OF THE DEEP
Now stranded on a small, forgotten island in the southern Maldives, Nick Caine and his ever-faithful sidekick Ishi are thrown into a desperate fight for survival. Seemingly betrayed by Marie Da Vinci, Nick is forced to gamble his and Ishi's very existence on an ancient map. The parchment document promises an incredible horde of hidden pirate treasure. The very words are music to a looter's ears―except the duo aren't the only ones interested in the hidden treasure. Modern day pirates are on the scene, and it's going to take all of Nick Caine's unflappable charisma to bail them out this time. The stakes quickly escalate, leaving Nick and Ishi very little time to narrow down the map's clues. Soon, their fate and that of an exotic Maldivian beauty named Norema hang in a precarious balance...proving once again that looting is a deadly business.

PYRAMID OF THE GODS
Deep in an Egyptian desert known as The Great Sand Sea lies an ancient treasure trove of Hittite gold... Legends say the gold belongs to the famed goddess, Sekhmet. But a map belonging to Nick Caine says otherwise...at least to Nick. He has returned to Egypt to claim the treasure, along with Ishi, Marie Da Vinci, and an old friend of her father's, Akiiki Mubarek. Twelve long and painful years have passed since the last time Nick ventured into the unforgiving landscape―a trip that cost a college buddy who once owned the map his life soon after they began digging in the desert. Forced to witness his friend's execution, he vowed never to come back...until now. The four treasure-hopefuls journey to the deadly wasteland just north of Sudan, and fortune seems to smile when they uncover one of Egypt's last buried pyramids...a pyramid that looks remarkably like its Mayan counterparts. But a band of violent marauders from Sudan descend on the site, threatening to not only claim the gold for themselves, but to spill innocent blood in the process. A chance for redemption quickly turns into a desperate fight to survive. This time, even Nick might not escape the devil in The Great Sand Sea.
PostTweetShare Share with WhatsApp Share with Messenger
Community Updates
Amazon DealsAmazon discount code
New Comment Subscribe Save for later
1 Comment
19th Mar
now showing as £5.25