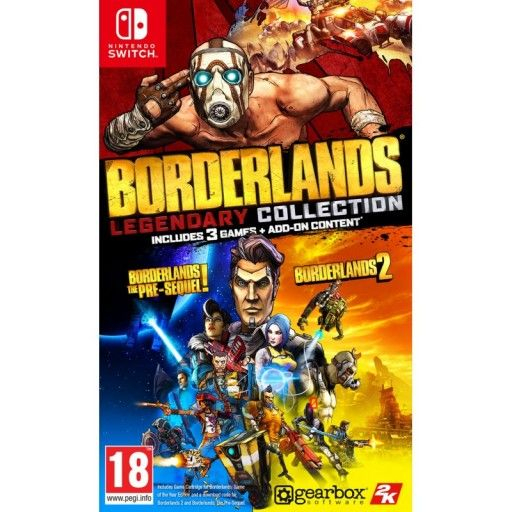 Thought they all needed downloading
20th Jul
does anyone know the cheapest store to download this digitally? Is it SA?
20th Jul

Thought they all needed downloading

I believe Borderlands One is on the cartridge...but it will need updates.
20th Jul

does anyone know the cheapest store to download this digitally? Is it SA?

There are websites that track this kind of information, you choose the game you want and they give you a table with the price in every single country. Just google eshop price comparison.
20th Jul
Good price, am thinking whether to wait for further decreases though. I think £25 is my bitting point.
20th Jul

Thanks, I already have that website:
eshop-prices.com/pri…GBP
It is just that it does not have the legendary collection on there.
Thanks for your help though.
20th Jul
The original game without the GOTY content is on the cartridge, there is an update it constantly pesters you about which is the GOTY content and ultimately makes you want to install in rather than keep dealing with the pop up.

B2 & PreS are unfortunately as a download code known as the handsome collection(you will see these sold as the handsome collection and Borderlands GOTY and not as one package on the eshop).
I myself am yet to redeem mine but have been having quite a bit of fun with the original, more so than I ever did when I tried with the original on 360 and then B2.
Works really well as a pick up and play handheld game for me rather then one you strongly focus on. Runs brilliantly too with only minor shadow issues in the distance in some areas. It also does support split screen co-op, I cannot confirm whether it supports 4 people though(someone else may know).

In short, despite the code I do recommend it.

An in case anyone is interested, the Bioshock collection also runs great, has a bit of each game on the cartridge(suffers the pop up issue about updating like Borderlands), you put it in and each game appears on the menu, you can then update each one separately so no download code required. The latter part there i just do not understand unless it's Gearbox swinging their weight?
20th Jul

Yes that's because it has the handsome collection and Borderlands GOTY as sepaprate purchases.
20th Jul
I'm having a blast. I played a bit of 1, but have started 2 again. It's great.

I'm not too fussed about the two games being digital as they have a lot of game time in them.
20th Jul
Morning. I have this game after buying from The Game Collection via Ebay on a previous deal. Cartridge arrives with 8GB of Borderlands 1 and then there is a further download to 'top up' the remaining GB for Borderlands 1. Also included is a code for Borderlands 2 and The PreSequal. Each game is roughly 15GB of data on your switch but can be downloaded individually so you don't need them all on your switch at once. The total storage requirement is c.49GB for all 3 games. All 3 games run superbly well at 30FPS (i believe) and I have played for nearly 15 hours of Borderlands 2 with no issues whatsoever. I hadn't played the games so I am enjoying them a lot! Really good games and quite funny too! Hope this helps someone as i had all these questions myself before taking the plunge
20th Jul
It’s a shame it’s called the Legendary collection and doesn’t have the latest Lillith dlc, which I would assume also means it has the old level cap of 72 and not 80.
20th Jul

I believe Borderlands One is on the cartridge...but it will need updates.

This is right yup, think theres a 4gb download for borderlands 1. The pre sequel and borderlands 2 are on a code. They do run really well on the switch to be fair.
20th Jul

Yeah I agree. I have posted some comments earlier today, but I agree that once you buy, be prepared to not sell on!
20th Jul
I replayed all of the Borderlands games on PC with a friend during the corona lockdown, so I have very recent memory and experience with all the games. I saw the Legendary collection on gamivo last month and snagged it for £19 just to check it out and I was pleasantly surprised how good the games look and play. Definitely worth the purchase if you want to play on the go.

And while the resale value of the physical copy might be poor, you can easily get at least 100 hours of them and several times that if you want to max out your characters (let alone all of the available) and defeat the raid bosses, so you'll definitely won't end up feeling that you didn't get your money's worth.
21st Jul
I like Borderlands but it's turning into the new Skyrim.
22nd Jul
£27.95 now @thewrecker7477
22nd Jul