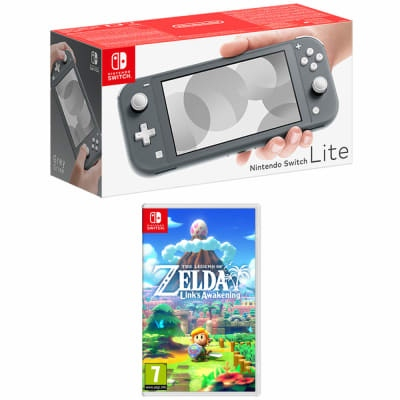 Nintendo Switch Lite and The Legend of Zelda Link's awakening for £199 delivered. Choice of colours including grey, turquoise and yellow. Given Zelda is selling for £36+ at retailers it makes the console around £163. Possibly cheaper if you have game points/credit to use. Free delivery.

26 years after its original release on Game Boy, The Legend of Zelda: Link's Awakening is reborn on Nintendo Switch. Buffeted by a storm, Link washes ashore on the mysterious Koholint Island. In order to return home, Link must overcome challenging dungeons and battle against fearsome monsters.

This new version of the classic adventure includes many unique elements that appeared in the original Game Boy release, such as 2D platformer-style rooms and appearances from characters outside of The Legend of Zelda series.
PostTweetShare Share with WhatsApp Share with Messenger
Community Updates
GAME DealsGAME discount code
New Comment Subscribe Save for later
Top comments
30th Jan
Lot of hate for the Switch Lite. Got one of these as a present for Xmas with Zelda. I'm really happy with it. Once I got a grip case on it from Orzly it's very comfortable to play with.

I see these two different consoles as different beasts. I'm able to play this whenever I want and my son plays the original Switch. We're both happy.
30th Jan

I got my son one for Christmas and personally I think its amazing, he takes it on long car journeys. Also zelda looks stunning, never seen a game look so beautiful.
30th Jan

Two very different products but nice try?
30th Jan
The switch that doesn’t switch
So tempted to pick one up, but the lack of Bluetooth audio support really kills it for me. Does this also suffer with the dreaded stick-drift issues like the original Switch?
30th Jan

Yeah they do suffer from it which is what is ridiculous. Typical Nintendo!
30th Jan
Very tempted - I wonder if there are cashback offers.
30th Jan

Aye, ones a cut down cheap version of the Switch v2 and the others the Switch V2.
Edited by: "SmallMiracle" 30th Jan
30th Jan
Has a switch owner myself I've tried the switch lite myself and it just feels really cheap and nasty .. glad I bought the original
30th Jan
Love it, Love it, Love it!!!
30th Jan
Don’t do it, buy a second hand switch instead, then feel free to walk around with the proper machine instead of this flimsy
30th Jan

Nice troll, but we all know the Switch Lite is the master race of the Switch family.
30th Jan
Game offering a decent deal? What is this madness?!
30th Jan
Lot of hate for the Switch Lite. Got one of these as a present for Xmas with Zelda. I'm really happy with it. Once I got a grip case on it from Orzly it's very comfortable to play with.

I see these two different consoles as different beasts. I'm able to play this whenever I want and my son plays the original Switch. We're both happy.
30th Jan
No bluetooth audio it seems
30th Jan

Horses for courses
30th Jan
Hoped when this deal came back around at another retailer they'd offer Mario Kart 8/other titles instead of Zelda. (Same deal as the launch day offer they had at Curry's).
30th Jan
I have a link for a grade a switch v2 with a £30 Nintendo EShop voucher for £216 if anybody wants it, heat added
30th Jan

No bluetooth audio it seems

Can you send it to me please?
30th Jan

Can you send it to me please?

Bought a Switch at launch and a Switch Lite for my wife before Christmas. I prefer the Switch Lite over my original Switch and tend to borrow hers a lot of the time now.
30th Jan

Most of them worth every penny.

But then you can also sell the game for £35-40 when you're finished with it.
Edited by: "ArcAndPie" 30th Jan
30th Jan
I have the lite and my daughter has the full version. Playing Splatoon 2 on the lite is uncomfortable after a few minutes, has to get joypad style grips for it. Great device but imho not for adult hands
30th Jan
People are using excuses that they know fair well the switch doesn’t have to rule it out I bought one before Xmas and it’s a decent toy but sometimes I wish I had the bigger one.
30th Jan

Stupid trash. Try again. Atleast someone is making a difference to portable kid's entertainment.
30th Jan
The infamous 'drift issue' would scare me enough to buy a lite. They aren't going to be cheap to fix when the warranty runs out.

I have both and for playing in handheld mode I much rather use the Switch Lite. It’s always annoyed me how the JoyCons on the original one wiggle when you are holding it. Hopefully one day they will release a TV only pro version so I can ditch the original.
31st Jan
Just bought the game for £32 sealed on eBay. Looking forward to getting it and yet... Got it already in my phone, laptop and PC lol... but the graphics... That's the reason I wanted it
3rd Feb
A good deal on paper but the fact they haven't fixed the stick drift issue is enough to put me off ever buying this. How Nintendo have been so ignorant to the issue nearly three years after release says a lot about how they treat their customers.

With the main Switch model you can still replace a dodgy Joycon if out of warranty. How much will you have to pay to get this repaired if the stick goes dodgy after warranty has expired?

I still haven't bought any Switch model as I'm waiting to see if they release a TV only model with a proper controller bundled at the end of the year. No way I'm supporting their overpriced consoles when they have such poor build quality.
3rd Feb

Did you find any yet, the V2 switch plus arctis 1 wireless.headset deal for £329 on game.co.uk isn't too bad.

Haven’t found anything yet. A lot of the worthy deals at the moment are focused on the switch lite. Seems like the switch V2 won’t be going back on offer anytime soon.