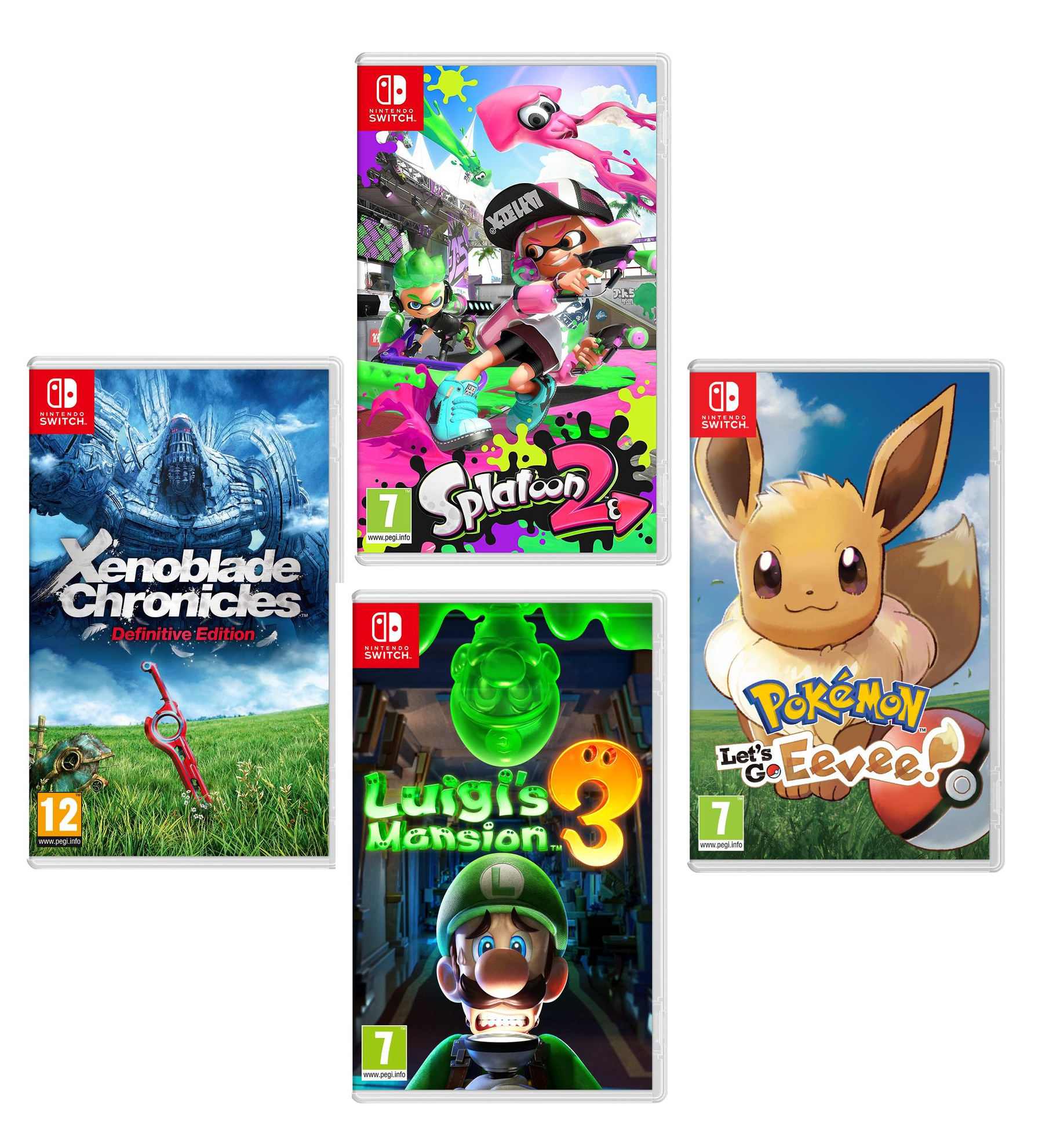 Insert the code at checkout to get the deal price.

Luigi's Mansion 3Save Mario from the haunted mansion once again in Luigi's Mansion 3 for the Nintendo Switch.Join Luigi as he embarks on another spooky adventure to rescue his brother from the clutches of King Boo. With the help of Professor E. Gadd and his inventions, vacuum up ghosts, solve puzzles and explore the creepy mansion to free Mario.Video

Relive the classic adventure of Shulk and his revenge against the Mechon in Xenoblade Chronicles: Definitive Edition for the Nintendo Switch.
After an attack on Colony 9 by Machina warriors called the Mechon, young scientist Shulk gains possession of the Monado - a mythical sword that holds powerful energy. Join him and his companions as they battle against a seemingly-unstoppable mechanical menace.

Looking and sounding better than ever, the Definitive Edition features HD visuals, smoother gameplay and a remastered soundtrack. Plus, with new casual and expert difficulty modes, there's something for new players and veterans alike.

Get ready for Pokémon: Let's Go, Eevee!, a new adventure for Nintendo Switch.Enjoy the much-loved feel of a classic Pokémon RPG on Nintendo Switch with beautiful HD graphics and gameplay. Travel across familiar lands encountering Pokémon and battling rival trainers. It's the perfect mix of old and new that will have seasoned Pokémon fans and newcomers alike playing with fun and excitement.You can you can take on the missions alone or with a friend for double the fun. And if you're a fan of Pokémon mobile games you'll find there's a strong link between Pokemon: Let's Go, Pikachu!, Pokemon: Let's Go, Eevee! and Pokemon GO.
‌
Splatoon 2Splatoon 2 brings all the ink-spraying fun of Splatoon, and adds a host of new game modes for you to enjoy.

The classic Turf War is back, with teams racing to cover the arena in ink before their opponents. Use exciting new mechanics like moving towers to get deep into enemy territory, or the special Rainmaker weapon that lets your team get to the enemy base to set off.

Ranked play lets you record your victories and see how you stack up to other players around the world. And if you want to get involved in serious games, jump into a 2 hour long special league battle.

The Salmon run is a fully cooperative game mode that sees ambitious inklings fending off waves of Salmonids. When you want to go it alone, there's a story mode for solo play that sees you fighting to save the squidnapped Great Zapfish.

Grab the Nintendo Switch Online app and you can summon your friends for casual or ranked play. When you start a game against each other, it will automatically split you into your in-game teams so you can talk strategy.

On Curry's website, they state that the FNDDGAME code is for free next day delivery, not for £5 off, so that may get fixed at some point I guess!

Edited by: "Bez3000" 18th Jul
18th Jul
Anybody got pokemon let's go? Was wondering how it was, heard it uses pokemon go catch system, is it a bad system? Easy to learn to use? I can't imagine it working well on a non touch screen.
18th Jul

It's passable in my opinion, but I wouldn't suggest going out of your way to play it.
18th Jul

Yes but I know but a lot of games don't actually support full touch screen/features of touch screen?
18th Jul

It works well You do a throwing motion holding a controller, or in handheld mode aim by moving the whole system ¿or maybe can use a control stick if prefer? and just press a button to throw ball
18th Jul
Is this a decent price for Xenoblade?
18th Jul

I think it depends what you go in expecting. If you want a full "bigger kids" pokemon experience then go for sword and shield.
However, I played let's go pikachu with my young son and absolutely loved it, memory lane re-living the original r/b/y experience, with much of the grind / difficulty taken out of it through pokemon go style wild pokemon catching, and experience shared between your party pokemon when battling. This combined with the fact you can two-player play the adventure and even battles and gyms etc meant it was so much more accessible for my son and he loved it, which was really nice to see and be able to share together.
So not one for purists if you like, but a really nice experience.
18th Jul
LM3 is probs the best buy here.
18th Jul
Not that I don't want to support Amazon's competition, but I do have an Amazon discount code that expires soon. What are the chances of Amazon price matching this?
18th Jul

It won't becasue this is not a price drop but the code is making the deal price.
18th Jul
thanks. currys deals for nintendo are the best anywhere.

you can consistently get them for £35. i really wannt get DK tropical freeze but i still refuse to pay more than that for a wii u port. but i might end up not having a choice

got xenoblade chronicles definitive so that should keep me happy after i finish ghosts of tsushima.
18th Jul

Thanks for the clarity!
18th Jul

It's actually a lot less laborious than beating the bejeesus out of a poor animal you're trying to catch, putting it to sleep and yeeting balls at it till it catches. I enjoyed it as a Pokemon casual who hasn't finished one since Silver near 20 years ago.
18th Jul
Astro chain is £31.99 after code as well
18th Jul
LM3 is amazing. Would definitely recommend.
18th Jul

If you're playing portable you literally just aim with the gyroscope and press a button to throw which I prefer. It's super easy but it's not like any pokemon games are actually challenging, you play it for the fun factor of collecting the pokemon and playing through the adventure.

It's a remake of the original Pokemon Yellow in case you weren't aware.
18th Jul

works with animal crossing wife will be a happy bunny lol
20th Jul
Anyone know if LM3 is OOS? Tried several times, on different devices, get all the way to enter payment details and keeps stating "We can't process this order"

Edit - Spoke to their video call ppl and they defo have it in stock, sounds like a technical glitch.
Edited by: "TVVideoGames" 20th Jul
20th Jul