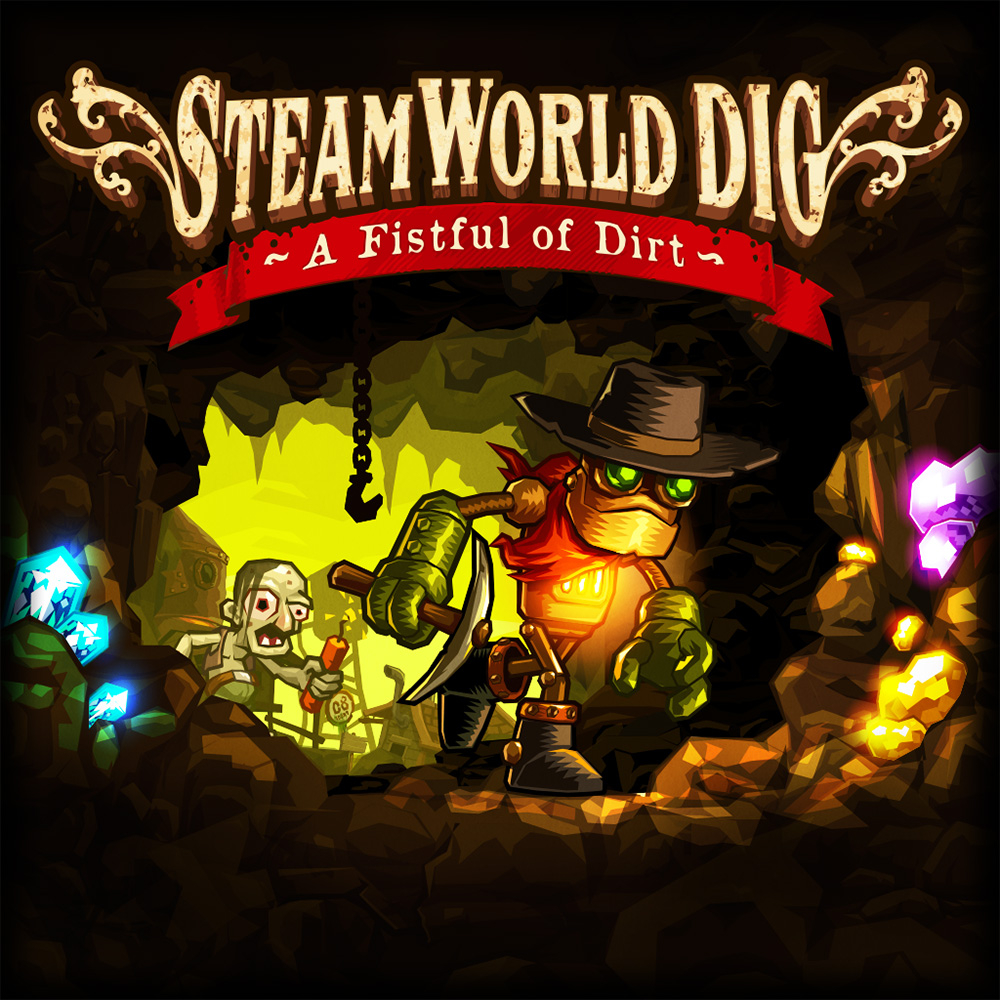 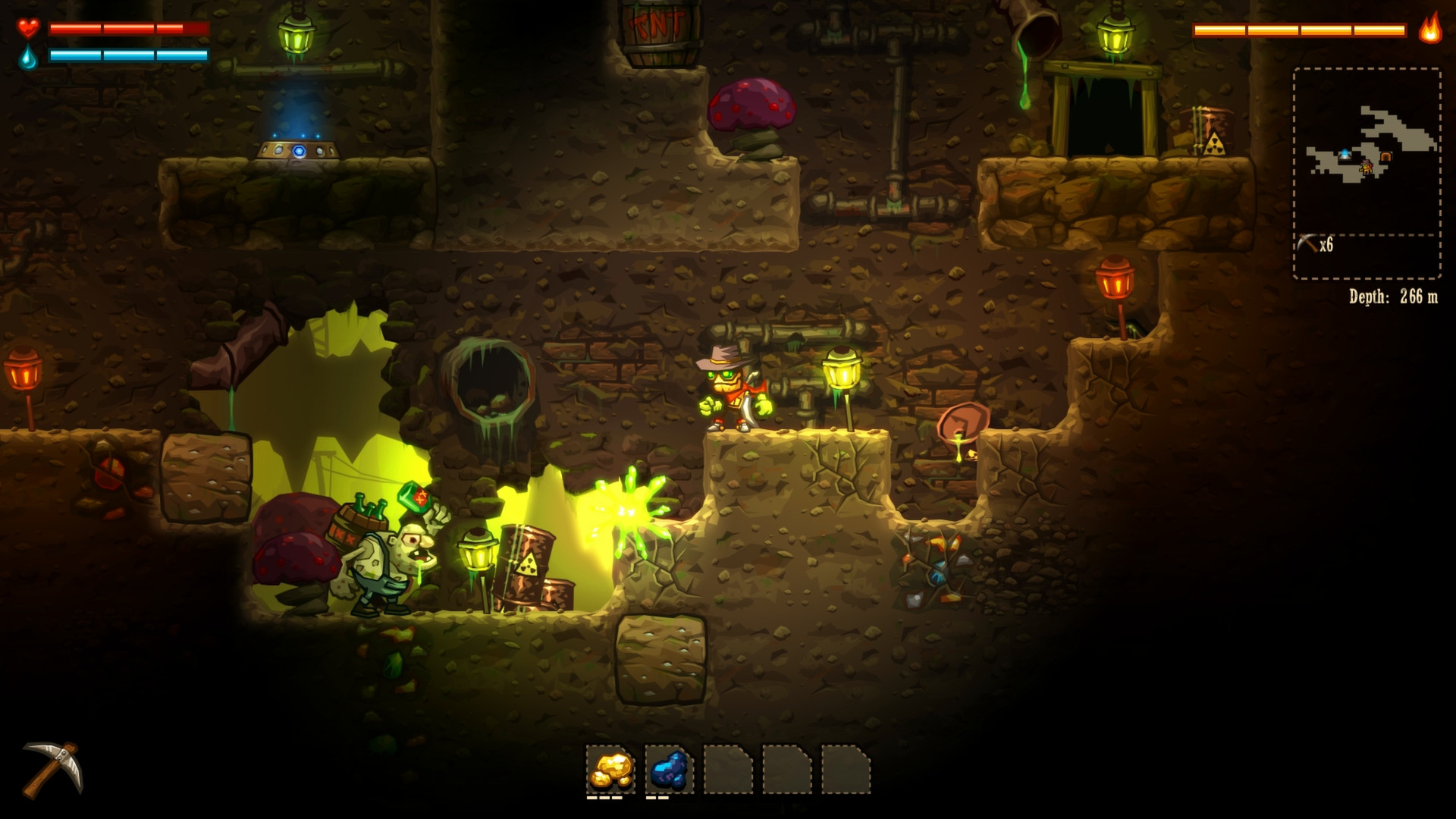 SteamWorld Dig is a platform mining adventure with strong Metroidvanian influences. Take the role of Rusty, a lone mining steambot, as he arrives at an old mining town in great need. Dig your way through the old earth, gaining riches while uncovering the ancient threat that lurks below... 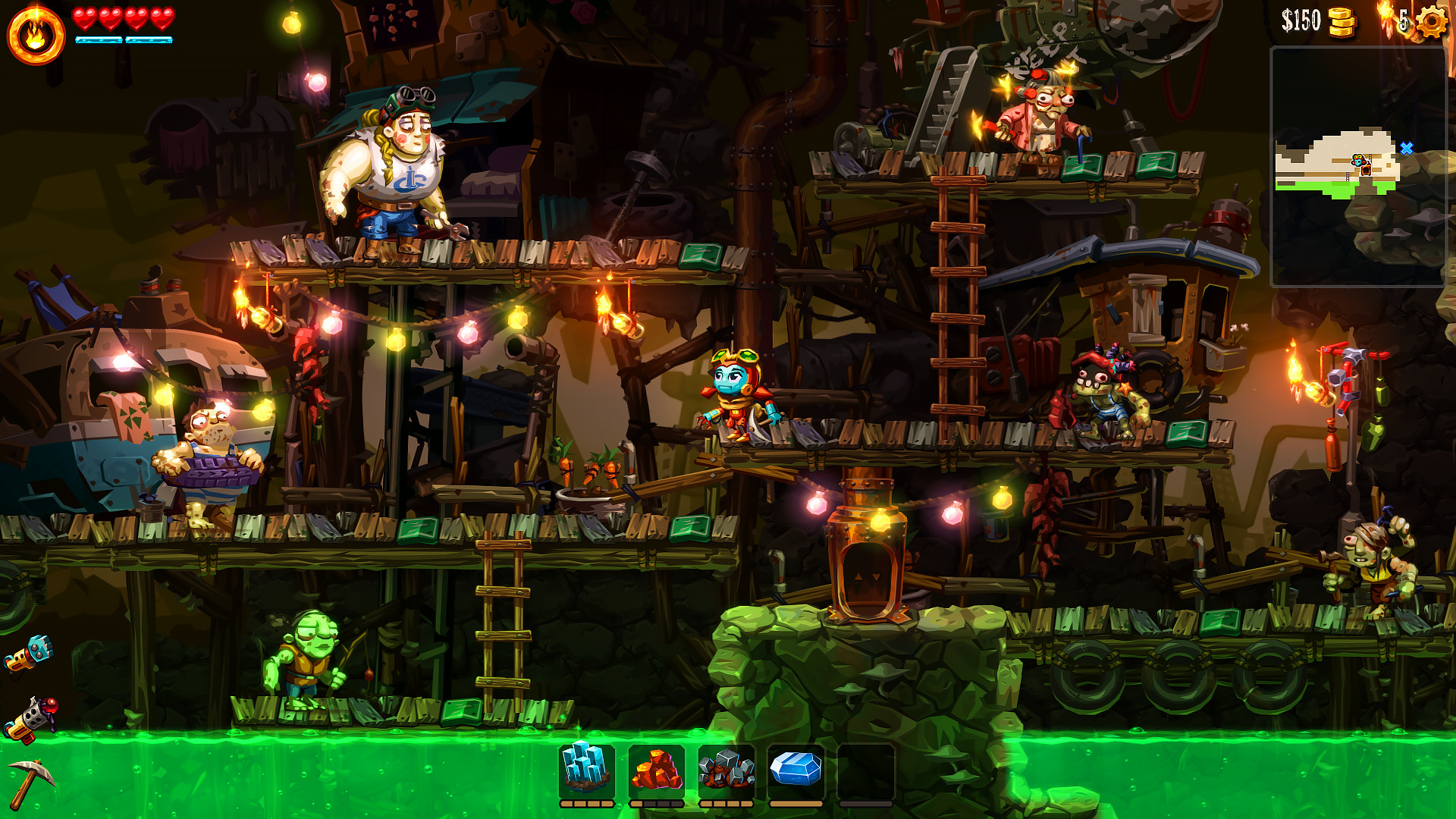 SteamWorld Dig 2 takes you on a platform mining adventure forged in Metroidvania flames. When an old trading town is struck by mysterious earthquakes, it’s up to a lone steambot and her unlikely companion to uncover what trembling terrors lie beneath.

Dig your way underground and explore vivid worlds riddled with treasure, secrets and traps. Combat dangerous enemies at every turn of the underworld’s twisted paths, including shadowy creatures and the haunted remains of an ancient electrical threat.

Upgrade your gear to forge deeper into the earth and take on bigger challenges. Swing across large chasms with your Hookshot and fly through caves with the Jet Engine! And finally, learn the truth about your long lost friend… 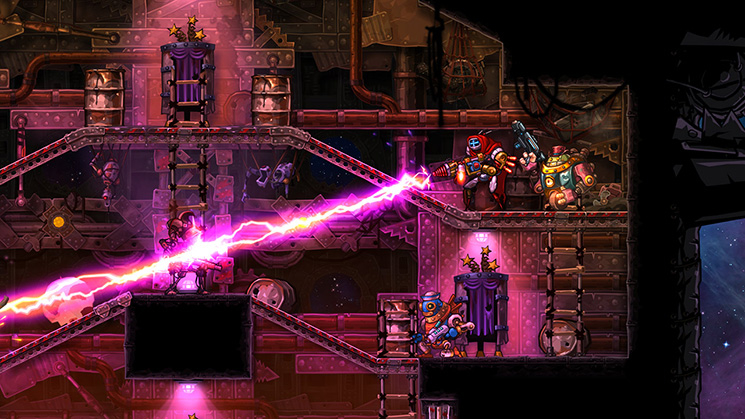 SteamWorld Heist: Ultimate Edition is fully optimised for Nintendo Swifch. It comes with The Outsider campaign, including a mysterious ally and a shipload of weapons, upgrades, hats, and missions previously only available as DLC.

As the captain, you board, loot and shoot your way through enemy spaceships. Overcome the challenges of the vast frontier by upgrading your recruits with unique abilities, weapons – and even stylish hats!

Second one is better yeah.

Really hope they make a 3rd
31st Jan
I played and loved the 1st Steamworld Dig on 3DS and recently finally got round to playing the 2nd on Switch, great game and look forward to an even larger 3rd game 🙏🏻
31st Jan
I’ve not played 2. One was really good though.
31st Jan

I played 2 first and also loved it so eventually picked up the first one. While the second is far superior it's still worth playing the first, especially for such a cheap price. Even if you only play for an hour or two you'll have got your money's worth.

Also Heist is a totally different game but also a lot of fun, it's my favourite of the bunch (not tried Quest yet)
Edited by: "Jez777" 31st Jan
31st Jan
Recently finished 2, loved it.
31st Jan
Thanks for digging out this deal
31st Jan

Thanks for digging out this deal

Oof
31st Jan
Steamworld Quest: Hand of Gilgamech is also on sale for £15.74, the cheapest I've seen it on switch so immediately picked it up.

Really enjoying it so far, and for anyone else that likes it I really highly recommend Slay the Spire, another deck builder but with a rogue-like twist, as it's one of the most fun and addictive games I've ever played (to the point I bought a few copies for friends). Noticed Thronebreaker, the Witcher/Gwent single player game also just released on switch.
1st Feb
I'm not a gamer but played Steamwold Dig 1 a few years ago and absolutely loved it
1st Feb
Not a massive saving but £1.61 at South African store.
1st Feb
Brilliant game and deal!
1st Feb
Can any (or all) of these games be played 2 player local split screen? I can buy to play with my lad
1st Feb

There is no local co op on any of these games.
1st Feb

Thanks for digging out this deal

I see what you did there. Robots.
1st Feb

There is no local co op on any of these games.

Thanks mate. I played terreria which looks like a similar game to this. 2 player co op games are fun to play.
1st Feb
Steamworld 2 was the first game for a while that I stuck with right to the end, perfect pick up and play game but sucks you in with so many hidden areas to find. Great game.
Edited by: "adamtattonreid" 1st Feb
1st Feb

Same, followed closely by hollow knight. Really easy just to have a quick 20min blast here and there. Great price this.
1st Feb
Thanks for posting; we have added this thread to the Highlights pages
2nd Feb
The first was a great game. The second is an amazing game. I really hope they don't do a Valve and not give us a third.
2nd Feb
Highly recommended heist, haven't played the others
2nd Feb
Bought 3 of them. Already completed Steamworld Dig. Great titles.
3rd Feb
Couldn't get into Heist as well as Dig but all great games.
3rd Feb
Played and love both Dig 2 and Heist - totally worth anyone's time.