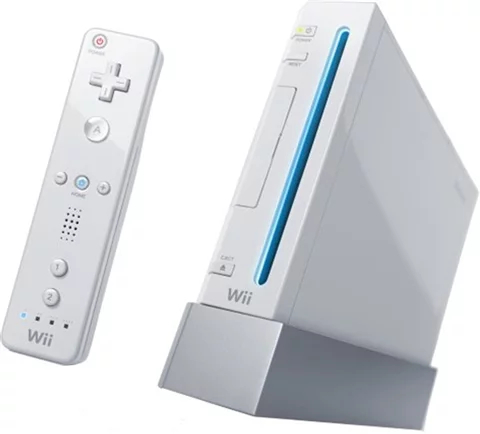 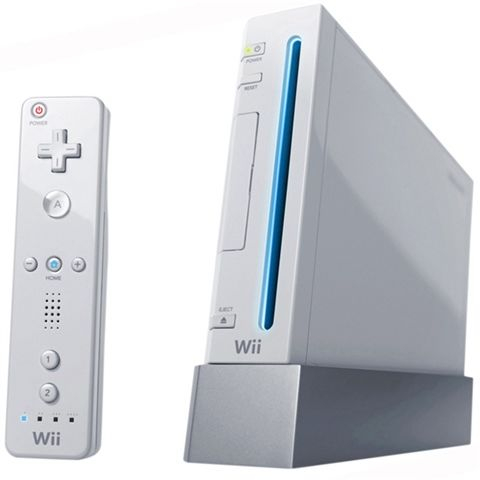 The Wii gaming console brings a revolution of interactive gaming to people of all ages. Experience the intuitive motion controls that deliver a unique social activity for the whole family. Wii gaming gets everyone off of the couch for hours of fun.

DESIGN Featuring a compact design that makes it a natural addition to any television setup, the Wii console is white in color and can be displayed either vertically or horizontally.

COMPATIBILITY The Wii is backward-compatible to all Nintendo GameCube games and includes four ports for controllers and two slots for memory cards.

SIZE About 8.5 inches long, 6 inches wide and less than 2 inches thick (roughly the size of 3 DVD cases stacked on top of each other).

INPUT / OUTPUT Input: Four Wii Remotes can communicate with Wii, which features a bay for an SD memory card.

Output: An AV Multi-output port for component, composite or S-video.NETWORKThe Wii console communicates wirelessly with the Internet via wireless or a Wii LAN adaptor. Wii also can connect wirelessly with Nintendo DS.

No, you can just run it through a cheap component cable to get HD and it looks as good as via HDMI
en-americas-support.nintendo.com/app…les
63 Comments
14th Mar
has this not been their standard price for a while? sure id seen them drop to £22 at some point too.
14th Mar

Yes been this price for more then 4-5 months, does go down to £22 and once went down to £20 as well. This is still ofcourse a decent price.
14th Mar
Can I play Super Mario on this ? Got a 65 OLED. Is the resolution descent?
14th Mar
Have got one sitting on the floor under my TV for 10 years since my son left. I'll have to turn it on and see what happens.
14th Mar

You will need the hdmi converter
14th Mar

Actually, It's even £15 once‌
14th Mar
Yeah they are worth getting for a few quid. My lad uses Wii more than switch at mo
14th Mar

There’s a hdmi attachment that is sold on eBay that improves image quality, doesn’t cost much at all.
14th Mar
My kids prefer this to the newer consoles
15th Mar
How do you get the Wi-Fi on this to work with modern routers?
15th Mar
We have the sky q broadband and it works fine
15th Mar
I bought this adaptor for mine and works a treat. All the Wii2HDMI adaptors look to be the same and there's some around that are cheaper.

They say 1080p upscaling etc. but not sure if that's completely true, but the picture quality is definitely better and is perfectly useable.
Edited by: "shoobirdy" 15th Mar
15th Mar

Should be fixed now, thanks!
15th Mar

Yeah I agree, it’s not quite 1080p but it makes it a lot better than the AV cable picture quality.
15th Mar

No, you can just run it through a cheap component cable to get HD and it looks as good as via HDMI
en-americas-support.nintendo.com/app…les
15th Mar
Get yourself a cheap SD card and soft mod. Just dug mine out the attic last week and now it's jammed full of GBA, mega drive and n64 games
15th Mar

Where did you get the soft mod?
15th Mar
Thanks OP is the v2 worth the extra 5? I take it this comes with 2 controllers? I Can't find any mention. The dance games for kids, do they require any additional attachments? Cheers
15th Mar
Grab this and Mario Kart plus a couple of wheels, and you've got the best value game ever made in my opinion. I've played countless hours on this, and still play it 12 years later. All for the princely sum of about £50.

Think I might get some Rainbow Road on right now.
15th Mar
This is the one that can also play gamecube games?
15th Mar
Nice
15th Mar
If using an HDMI converter, remember to go into Wii settings to adjust the display.
It's 480p
EDTV
15th Mar
I'm currently immersed in Super Mario Galaxy right now. It's a phenomenal game.

Try Super Mario 3D World for Wii U, much better
15th Mar
May be a daft comment to some but if your local market has any game stores it might be worthwhile checking them out. Paid £15 for a Wii twice, once in Dudley and once in Birmingham.
15th Mar

Does your TV have the old RCA/phono connector? If not, you'd need to get some kind of converter box. And even if you did, it will look terrible and there will be a huge amount of input lag because the console outputs analogue but the TV displays digital.

How do you get the Wi-Fi on this to work with modern routers?

As long as your router does 2.4Ghz band as well (most still do) your fine.
15th Mar

It is amazing
15th Mar

How do you get the Wi-Fi on this to work with modern routers?

You can't as pretty much every game is discontinued, but if it's anything like the Nintendo ds, lite or dsi you had to disable to network security to WEP I think it's called. But anyone could connect to Torr network I think
15th Mar
Worth it for the Homebrew support alone, you can basically have a fully brick proof soft modded Wii in 10 minutes with the right guide.
15th Mar

This is the one that can also play gamecube games?

All wii consoles can play gamecube games but some of the newer ones don't have the gamecube controller ports of the top. I think it's just some of the newer black coloured versions
15th Mar
I'm pretty sure if you just say on Facebook... "has any got an old Wii they don't want" you'll be offered 10 within the hour.