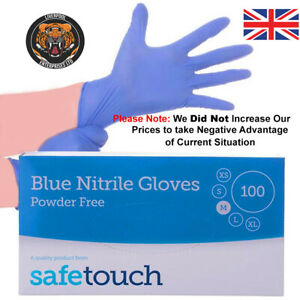 I was looking at some gloves and those were the best prices with quick delivery. Non powdered. Might be quite useful in the current situation.
PostTweetShare Share with WhatsApp Share with Messenger
Community Updates
EBay DealsEBay discount code
New Comment SubscribeSave for later
Top comments
24th Mar
Please don't buy these unless you 'need' them. If you are not a carer or key worker you don't need gloves. Buying will.jsut add to problems.
24th Mar

I'm a front line police officer and I have had NHS staff crying because they don't have the PPE they need.

I go into the supermarket where the staff touch EVERY single item customers buy as it's being out on the shelf or being passed through the till.

A much more simple thing for you to do would be to wash your hands before you go to the shops, and then after you have done your shopping. Most supermarkets have toilets you can use.

Maybe buy a box, keep 10 pairs of gloves and then give them to someone on a checkout.
24th Mar

You do realise that if I manage to keep my family safe and stop us from getting the virus I possibly help NHS by not taking space in a hospital?
24th Mar
Or buy a box and donate directly to those who need it. Most retail staff and postal workers have absolutely no protection and yet deal with public everyday.
51 Comments
24th Mar
Great if they can get to the right people
24th Mar
Please don't buy these unless you 'need' them. If you are not a carer or key worker you don't need gloves. Buying will.jsut add to problems.
24th Mar

Great if they can get to the right people

most of the other are out of stock or large. I wanted medium to be able to use in the shop etc.
24th Mar

What, I didnt say anything about size
Edited by: "Kryptonitee" 24th Mar
24th Mar

I need to go to shop as online shopping is not possible in my area so I want to protect myself and my family. I'm not stockpiling just buying one box.
24th Mar

But some people might need them when they take a ton of food out of their house that is now out of date and going off to the bin.
24th Mar
Or buy a box and donate directly to those who need it. Most retail staff and postal workers have absolutely no protection and yet deal with public everyday.
24th Mar

You do realise that if I manage to keep my family safe and stop us from getting the virus I possibly help NHS by not taking space in a hospital?
24th Mar

I'm a front line police officer and I have had NHS staff crying because they don't have the PPE they need.

I go into the supermarket where the staff touch EVERY single item customers buy as it's being out on the shelf or being passed through the till.

A much more simple thing for you to do would be to wash your hands before you go to the shops, and then after you have done your shopping. Most supermarkets have toilets you can use.

Maybe buy a box, keep 10 pairs of gloves and then give them to someone on a checkout.
24th Mar
Are these not very expensive?
24th Mar

Haha, you’re right in that it will probably be the same people stockpiling PPE (and exacerbating shortages that are depriving NHS staff of it) and buying tonnes of food!

The other thing is that gloves can actually be worse than useless. You feel invincible while wearing them, but they’ll transfer pathogens to your face and other surfaces just as well as bare hands - and you may be less likely to be careful not to do so. You can also transfer those nasties to your hands when taking them off.

Hand-washing FTW. You’re not inherently protected by wearing these, and they may actually make you more likely to put yourself and others at risk
Edited by: "finknottle" 24th Mar
24th Mar
These are more than double what they usually cost, terrible deal
24th Mar
I doubt you can use these for NHS anyway since they don't seem to be sterile
24th Mar
Thanks for posting, work in a retail store and we're really struggling to get any sort of PPE at the minute; just ordered some of these - hopefully will arrive soon 🤞🏻
24th Mar

That link can help such people to get some gloves if their employer wouldn't do this.....
24th Mar

Yep totally agree. Hence why I said unless you 'need' them. Hopefully companies will agree to reimburse the cost too.
24th Mar
I've still got a couple of boxes of these type of gloves I bought a few years ago - I use them for gardening and DIY - one brand 'glove plus' are strong enough to last weeks. I wouldn't wear them when out and about.
24th Mar

i live in a block of flats and mostly old people live on the bottom floors, i should not buy these to protect them when pressing the button to open the main doors, everyone who lives in my flats need to press a single button to get in and out of the door.
24th Mar
I remember Costco still had loads of boxes of gloves, medium and large, 200 pairs for just under £7, if it helps anyone. Perhaps all of their stores, this was yesterday. Can't remember the brand.
Edited by: "traienuts" 24th Mar
24th Mar

I'm not some kind of viral expert, however common sense to me is that Washing your hands before you go out and when you get home would suffice. And everyone in your building should do the same.

Probably not, no. Your consideration for them does you credit, but you’re not protecting them if you’ve used the glove for anything else beforehand. It’ll transfer nasties just as well as skin. What I usually do with buttons is use my knuckle, as doesn’t come into contact with many surfaces, then sanitise or ideally wash my hands afterwards. Same with self-checkouts!
24th Mar

Washing your hands will work fine.
24th Mar
Was going to buy, but then realized why the heck do I need one, other than panic buying? People in general won't need it, other than keeping their hand dry from washing dishes or mopping the house. As someone said on top, most likely someone using it will eventually though them self on their face, etc and eventually infect them self or others. Not buying, but heat as many would genuinely need them.
24th Mar

I find holy water and marmite does a good job too.
24th Mar

Make your own face mask (search online) to stop you touching your face(the main way to get infected).

THAT is far more effective, much more so if you wash your hands 5-10 TIMES more than usual.

I have literally no idea why you are linking this to my comment but thanks.
24th Mar
I used to have OCD. I was in the middle of a course for anxiety when covid-19 kicked off and I've not returned. My OCD has though.

Teaching CBT they'd say "what's the worst that could happen?" and I'd say "I die" and they'd say "you won't". Now the prime minister is saying "don't wash your hands and you'll die".

Anyway, side from all of the hands washing, when my shopping gets delivered I'm wiping everything down with antibacterial wipes before they go in the cupboards.

I wonder, is that just me?

We have a packet of gloves like this, but I'm unsure when they'd ever come in.
24th Mar

You know you have OCD when your hands are as soft as a small child's due to the years of cleaning.
24th Mar

Washing your hands will work fine.

On the contrary, rough and split is the more likely result, especially in winter!
24th Mar
This is the next thing people use and throw at their backside. Quite a few of these littering the pavements already round my way...
24th Mar
Bought for the guys at the co-op. We're both teachers so will take a few first. Much respect for the retail staff who lack the ability to control their situations, literally anyone can just walk in.
24th Mar

I don't think many people are thinking about this, but I share your sentiments. However, by and large anti-bac wipes won't be very effective as they are anti-bacterial, whereas we are dealing with a virus. Alcohol is what is needed, or bleach is apparently quite effective.

However, I WASH everything that comes into the house now with soap and hot water. People need to realise that anything they bring into the house could have the virus on, due to people sneezing or coughing on it or inadvertently spitting on stuff when they talk, or they transfer the virus onto the products they touch with their hands and then put back down. Yes we all wash our hands, but what about the stuff MANY other people could have touched that many people just shove in their cupboards, fridges and freezers when they get home without a thought?

I don't buy/order ANYTHING that is loose, like bakery bread. Only things factory sealed in plastic or tin that can be washed. Then EVERYTHING is washed with soap, left for a while, washed again with soap and then rinsed with hot water and left to dry. The only thing I do buy loose is some fruit and veg, but only those that can be cleaned as well - which I clean thoroughly as above. Anything else I leave.

Any parcels are taken to and left in the garage unopened for at least a week and letters are opened very carefully without touching the insides, by tearing the envelopes enough to shake out the contents on to the table and then throwing the envelopes in the bin and washing my hands, then apply sanitiser BEFORE touching the letters. Yes it's all rather OCD but I'm trying so hard not to contract this virus as I'm in a high risk group. Funnily enough, they were talking on Sky News a couple of days ago about the belief that we will be creating a whole nation of OCD sufferers because of all the hand washing and other measures we're getting into the habit of doing.

And, it is interesting to note that Iceland are having a dedicated hour for NHS staff only to shop, BUT that they are asking NHS staff to buy anything they touch or pick up, as they are more likely to be infected for obvious reasons. This sort of goes to prove my point about washing stuff brought into the house.

I knew this virus was coming back in early January when I kept hearing of it on LBC, so I began preparing then and spent the next month or so doing all I could. Fingers crossed I avoid it.

Stay safe everybody.
Edited by: "Phila4" 24th Mar
24th Mar
The good thing about the gloves is you are far less likely to touch your face when wearing nitrile gloves.

Its hard to pick your nose with a blue rubber gloved finger...
24th Mar
Ugh would get these for work but my god the price is high, how ridiculous
24th Mar

Huh?????
24th Mar
so if you buy the clear large, does the title mean you will get a box of medium free or will it also be large....
24th Mar
All gone anyways