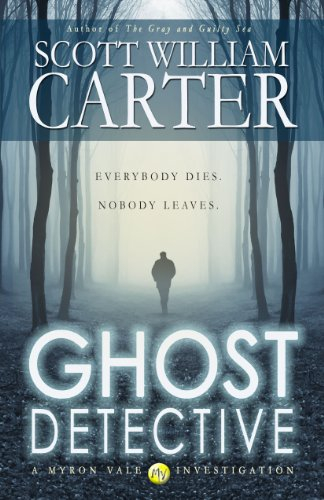 Normally £3.83 On Kindle But currently Free. 73 ratings Scores Average 4.3/5.
Everybody dies. Nobody leaves . . . Award-winning author Scott William Carter returns with his tenth novel, a spellbinding tale of a man who bridges both sides of the great divide.

After narrowly surviving a near-fatal shooting, Portland detective Myron Vale wakes with a bullet still lodged in his brain, a headache to end all headaches, and a terrible side effect that radically transforms his world for the worse: He sees ghosts. Lots of them.

By some estimates, a hundred billion people have lived and died before anyone alive today was even born. For Myron, they're all still here. That's not even his biggest problem. No matter how hard he tries, he can't tell the living from the dead.

Despite this, Myron manages to piece together something of a life as a private investigator specializing in helping people on both sides of the great divide—until a stunning blonde beauty walks into his office needing help finding her husband. Myron wants no part of the case until he sees the man's picture ... and instantly his carefully reconstructed life begins to unravel.

“Scott is one of those rare writers who can and does cross genres, and do it well. You never know what kind of story you’ll get from him, but you do know that it’ll be good.” – Kristine Kathryn Rusch, Hugo award-winning author of The Disappeared

From the author of The Gray and Guilty Sea and Wooden Bones, comes this riveting novel of a man cursed with a terrible gift. In a world where everybody dies but nobody leaves, Myron Vale is the rare individual who completely straddles both sides of the great divide. His strange ability resulting from a gunshot to the head while serving as a Portland police officer, a few years later he recovers to forge a new life as private investigator catering to both the living and the dead. With its memorable characters, taut prose, and spellbinding story, Scott William Carter's Ghost Detective will haunt you long after you finish the final pages — a promising launch to what will hopefully be a long-running series.—FRP

PostTweetShare Share with WhatsApp Share with Messenger
Community Updates
Amazon DealsAmazon discount code
If you click through or buy, retailers may pay hotukdeals some money, but this never affects which deals get posted. Find more info in our FAQs and About Us page.
New Comment Subscribe Save for later
9 Comments
30th Dec 2019
Cheers Boz
30th Dec 2019
Thanks Boz & I wish you a Happy New Year!!
30th Dec 2019

Thanks Boz & I wish you a Happy New Year!!

Many Thanks Happy New Year
31st Dec 2019
hawt as always cheers
31st Dec 2019
Heard he had a ghostwriter
31st Dec 2019
Thanks Boz.. Happy New Year..
31st Dec 2019
I read this couple months ago, decided not to read the next one and was glad that it was over
Nothing interesting imho, but maybe you’re going to like it more than me
1st Jan
Happy New Year Boz, Great find. Thank you and hope you and your family had a great Christmas ‌ ‌
1st Jan