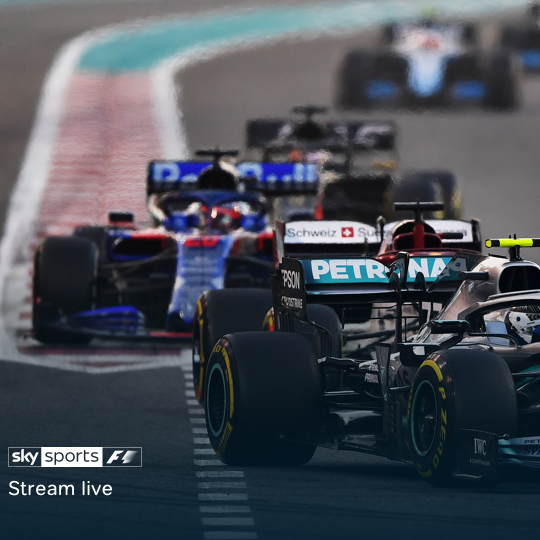 Not the cheapest way of doing this, but I know that there has been a lot of people waiting for this one. Works out at £9 per race. Hope it helps some that want to have coverage of the whole season without doing individual monthly/weekly passes etc.
PostTweetShare Share with WhatsApp Share with Messenger
Community Updates
NowTV Store DealsNowTV Store voucher code
New Comment Subscribe Save for later
Top comments
6th Mar
So here goes to try and save some money:

First three races are usually on Sky one.
Use a nowtv ent pass for this, some have a discount or free but max will be £9.

Then buy two x 3 months sports passes from the likes of argos/curry/ebay etc when on offer at £49.

Activate one just before the dutch GP, this will cover the first half of the season up to the summer break.

Activate the second just before Belgium and that will cover the second half of the season.

Total max of £109. Sell any redundant sticks to cex or ebay - roughly £7 back on each one so potential to gwt the F1 season sub £100 if you’re prepared to work/risk it. ‌
6th Mar
Just watch the highlights on YouTube and save yourself 2 hours of your life. (F1 fan for 30 years)
6th Mar
Too much money to pay out when China's race has been cancelled and others may follow
51 Comments
6th Mar
Don’t forget you can now convert Tesco Clubcard vouchers to Now tv credit at 3x value.

I’ve never done this, but reading the notes I assume you would have to convert the Tesco to NowTV and put the credit on your account , before then buying the season pass.
6th Mar
Remember if you want 1080p50fps, which is more important with F1 than football. It's an extra £3.00 a month.
6th Mar
Too much money to pay out when China's race has been cancelled and others may follow
6th Mar
Heat for the deal, which is a third off the regular Sky Sports monthly passes for 9 months, seven of which will include Premier League football.

But the "show" currently provided by F1 is not even worth the time spent sitting in front of the TV watching it, let alone having to pay £9 per race for the privilege.
Edited by: "nickgovier" 6th Mar
6th Mar
Load of c**p now day anyway, try watching Moto GP.
6th Mar
In places with the f1tv pro they pay less than £99 a year for every race and far more content. Fingers crossed it comes to the UK one day.
Edited by: "Mars104" 6th Mar
6th Mar

Indeed. The 'show' is only the first lap, then it just becomes a procession unless some unruly weather decides to raise it's ugly head during the race.

Love F1 but has become dull as dish water...next year I'd like to think will be far more entertaining with the new regs.
6th Mar
Think people are missing the point here. This is ALL the Sky Sports channels for £22 a month (£25 in 1080p 50fps). You don't have to watch the F1.
6th Mar
I see it for free...... That's all I'm saying...
6th Mar
Just watch the highlights on YouTube and save yourself 2 hours of your life. (F1 fan for 30 years)
6th Mar 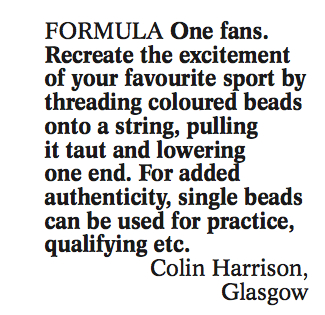 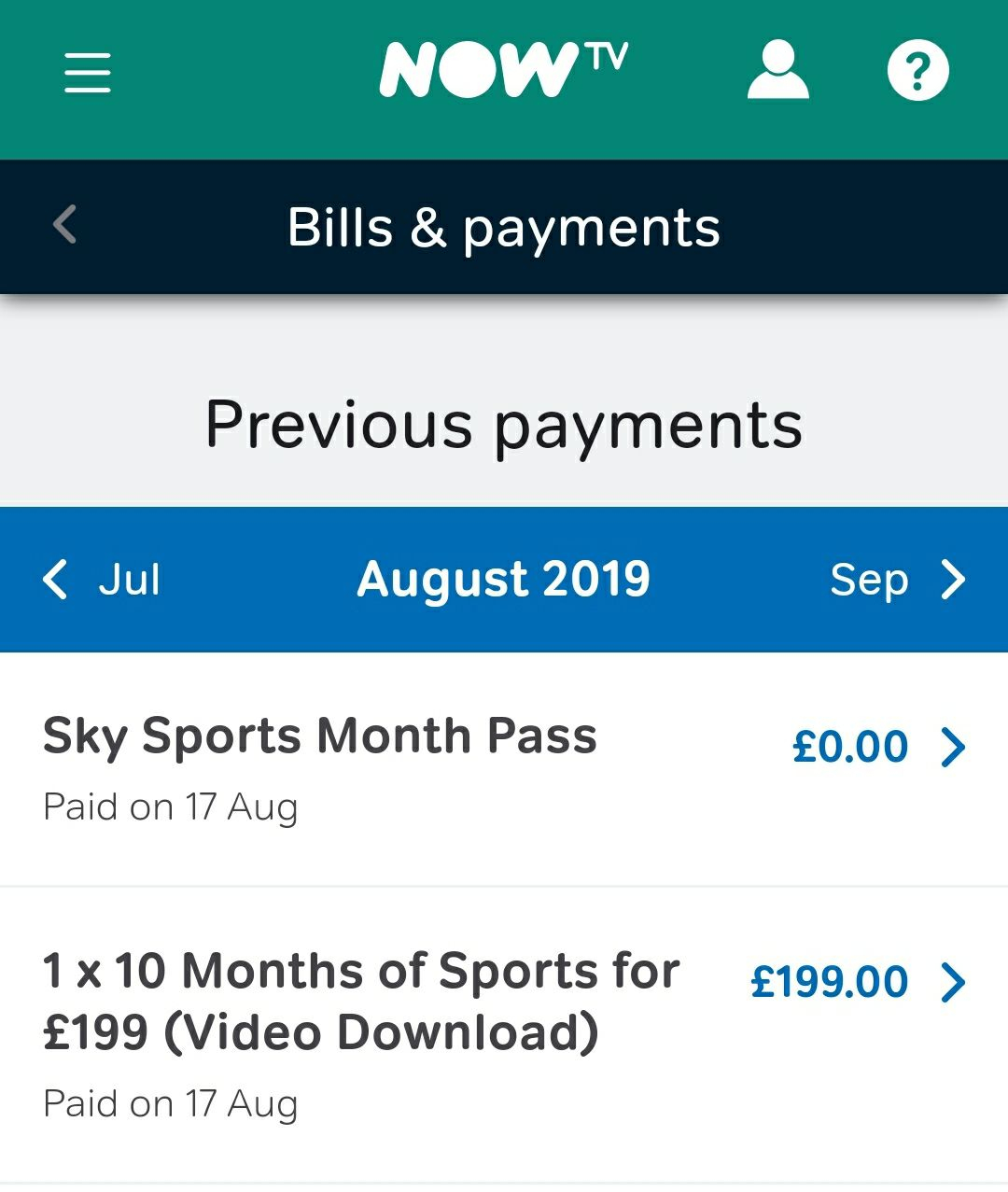 are you sure that it includes all the sky sports channels. can't see any confirmation of that on the now tv site?
6th Mar

Yes I can confirm it does. Should have added to the title but only just confirmed after taking out the package and don’t seem to now be able to edit
6th Mar

Has anyone tried this and had it work?

edit: Can confirm that I've just tried it and it worked fine. Just buy via Tesco, credit to your account and the price is discounted from NowTV's side.
Edited by: "hems88" 6th Mar
6th Mar

Which is almost as bad now as they all follow Marquez in a procession....

Try World Superbikes instead, its the Racing MotoGP was 5 years ago
6th Mar
Have to agree poor deal and I'm sure cheaper with buying monthly and weekly passes as some kind chap pointed out in the same thread last year
6th Mar

Reckon Quartararo may challenge Marc Marquez this year but that's about it. Others too old/inconsistent/on slower bikes sadly and this from a massive Rossi fan.
6th Mar

How? I’ve looked at a number of options but none give decent quality .....

Happy to be PM’d if you prefer
6th Mar
surprise surprise,another hilarious ripoff F1 season ticket price,i mean seriously when are people gonna wake up and say enough is enough.ever since F1 went the paywall route the sport has been slowly strangling itself to death.last year the price was £199 for a 10 month pass,the year before that was £150.the possibility of losing more races this year makes it even less value than previous years.yes there are more sports to watch with the pass,bit pointless really if you only wanna watch F1 though.as usual the UK F1 fan base gets screwed over compared to other fan bases worldwide.total uk viewing audiences have been dwindling for years and last year was a disaster with the biggest fall yet,something like 8.5 million,as well as falling viewership figures worldwide.the only reason they added more races was their desperate attempt to stem the flow of losses,that aint working LoL.hang on it gets better,some f1 global researcher stated last year uk audiences were on the rise,seriously where has this guy been the last 8 years,and i really need to know what hes smoking?the f1 show,well lets be brutally honest,its like watching a polished turd,i mean its not the F1 that i used to know thats for sure.last year i watched 1 race the british gp,the year before that 2 races,infact since 2012 the most races i have watched in a season was about 4.i know some fella on here went to the time and effort to work out some deals on day passes and monthly passes which worked out cheaper than last years season pass, maybe he can come up with something this year.i had been a ardent f1 fan for over 33 years,the trouble is the last 8 years the paywall and the show,s value just doesn,t cut it for me anymore.there is good news though folks,skys f1 contract is only up to 2024 so they only have 4 years left to keep screwing us over,err well unless they renew again?
6th Mar
Totally agree.
Hopefully Sky will have to put some races on Sky One again this year to boost up the average viewers per race over the season stat to keep F1 bosses happy.
Edited by: "ToddHoffman" 6th Mar
6th Mar
So here goes to try and save some money:

First three races are usually on Sky one.
Use a nowtv ent pass for this, some have a discount or free but max will be £9.

Then buy two x 3 months sports passes from the likes of argos/curry/ebay etc when on offer at £49.

Activate one just before the dutch GP, this will cover the first half of the season up to the summer break.

Activate the second just before Belgium and that will cover the second half of the season.

Total max of £109. Sell any redundant sticks to cex or ebay - roughly £7 back on each one so potential to gwt the F1 season sub £100 if you’re prepared to work/risk it. ‌
6th Mar

Excellent, thanks for this. Are the first three confirmed as being broadcast on Sky One?

Have been waiting for the Curry’s offer for a while now...
6th Mar

I'm one of the drivers
6th Mar

MOBDRO works quite well for someone I know (cough, cough). If watched on a phone it looks good, casting not so (he said).
6th Mar

I didn't think you got the F1 channel with Sky Sports - thought you had to pay for F1 separately
6th Mar
Surely the big failing here is the inability to record and therefore time shift and stop-start at will. Given the various different time zones, and the fact that many people are actually fairly active or otherwise busy at weekends, recording is pretty essential IMO. Also the 'F1's not exciting enough anymore' moaners can fast forward at will to help keep their peckers up.
6th Mar

In a NowTV sports pass you get all the channels. It’s only the mobile passes that exclude F1 and other channels.

The first three races are normally on Sky One as well as the F1 channel so you could watch this on the normal NowTV entertainment pass although I don’t think all the free practices and support shows will be shown.
6th Mar

First one definitely is confirmed. Previous years suggest other will as well. Have been doing this a number of years now.
7th Mar

Still love moto Gp, but watched the wsb opener this year and agree the racing was top notch.
7th Mar

Oh yes.
7th Mar
Can you use f1tv over a vpn by any chance? That would be a decent option particularly if you can cast it...
8th Mar

Just FYI - Bahrain is not in the provisional Sky One schedules. Should be confirmed by Wednesday.

Even so, I think the PAYG approach is the way to go this year with all the potential for cancellation.