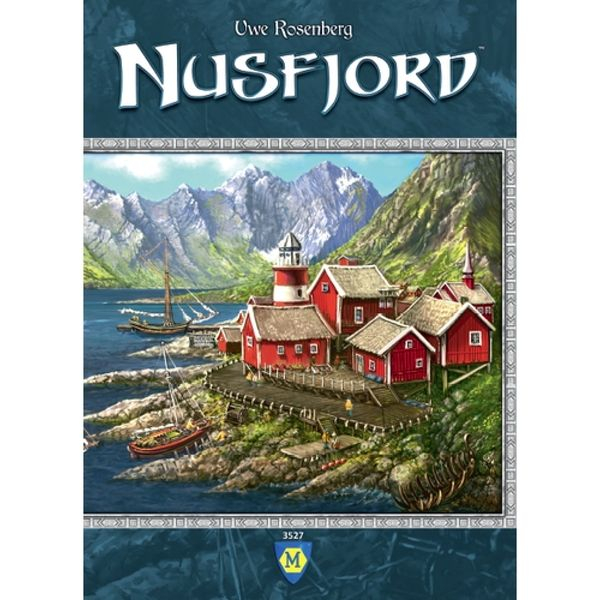 An Uwe Rosenberg worker placement game. Looks great but not played. 7.5 on BGG. NBP I Amazon. 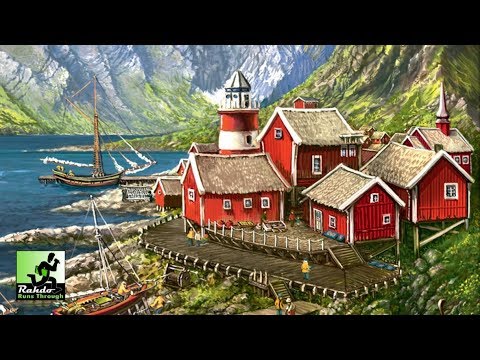 Nusfjord is a tranquil fishing village in the Lofoten archipelago in northern Norway. Fifty years ago, business was blooming when the codfish would come for spawning. Today, Nusfjord is more of a museum than a village, with less than a hundred people living there. Imagine how beautiful this place must be given that you must pay a fee to even look at the houses. Cruise ships used to pass by this long and now mostly abandoned island world.

In the time period in which the game Nusfjord is set, things looked quite different. Sailing ships dominate the fjord. The rocks around Nusfjord are covered in trees. As the owner of a major fishing company in Nusfjord on the Lofoten archipelago, your goal is to develop the harbor and the surrounding landscape, and to succeed you must enlarge your fleet, clear the forest, erect new buildings, and satisfy the local elders. Others do this as well, of course, so the competition is steep.

As with Agricola and Ora et Labora, Nusfjord has a worker placement mechanism, with each player starting with three workers that they place on a central board to trigger certain actions. Whether a player wants to clear a forest on their own board, buy a new cutter, or construct a building, they must place a worker on the appropriate space — which is possible only if room is available for this worker. Money is scarce, and one of the quicker and easier ways to get it is to place shares of your own company on the market. This risky action could be worthwhile because if you succeed in buying these shares yourself, you have usually won money and not suffered any disadvantages; however, if an opponent acquires these shares, then you must allow them to benefit from your hard-earned catches at sea. The village elders might want their own share of your catch as well, especially if you've visited them to take certain actions in the village, so if you don't take care, your catch could end up entirely in the hands of others and your camp will be empty.

Minimum Players: 1
Maximum Players: 5
Minimum Time: 20
Maximum Time: 100
Minimum Age: 12
PostTweetShare Share with WhatsApp Share with Messenger
Community Updates
365games.co.uk Deals365games.co.uk promo code
New Comment Subscribe Save for later
17 Comments
12th Jan
Got this from 365 games for Christmas looks good but unfortunately my copy was missing two sheets of pieces. I'm waiting for 365 games to send replacements.
12th Jan
Nearly bought this during the sales from chaos cards but finally bitten despite an ever growing shelf of shame! (recently moved to Bristol and yet to find people who prefer euro games)
12th Jan
Heat. Just bookmarking for now (shelf of shame is too large already - mostly due to you @jayhutton10 ).
12th Jan

You might have more luck with the publisher than 365games? I've had stuff missing from games and publisher usually sorts it quickly and efficiently
Edited by: "jayhutton10" 12th Jan
12th Jan

I posted a cheeky message on FB group and managed to find a couple of local groups to me as there aren't that many. Could be worth a shot
12th Jan

*not sorry
12th Jan
Love Uwe Rosenberg so got this for when it was this price a while ago, played a few times with 2 players and really like. Nice simple, friendly two player game, kicks along at a nice pace. Was quite short though and I felt it could have gone on for another couple of rounds, as once you got your houses on the board you could benefit from them towards the end. Could also do with a wider variety of nobles as they are the same every game. There is a wide variety of houses I don't see why the same couldn't of been done with the nobles.

Thank you I'll try that - I've not had this happen before and with other purchases like electricals or clothes it's been resolved by the store. - I thought they might send the part by canabalising stock or send a replacement.
13th Jan

Didn't realise it was Mayfair games. These were taken over by asmodee. I'd try them but they may not have spares.
Edit: asmodee parts picker has it listed

Depends on what type of games are your thing. There are lots of decent 2 player ones, my personal favourites at the minute are Hanamikoji, Patchwork and Jaipur but 7 Wonders Duel gets a lot of love as does Targi. A lot of the bigger ones work well 2 player as well.

There's a link to a few more geeklist links here

Another great deal, thanks Jay.

I got Rise of Queensdale for Christmas from Chaos Cards which has a missing punch board. Contacted them who asked us to contact Ravensburger but nothing back from yet them. Any idea where to go next?
14th Jan

I'd try ravensburger again. Did you fill an online form in? If so, try emailing CS direct if you can find a contact. If you emailed already, try and find a different contact address or a number to call?
I've only ever contacted publishers direct and they've usually been more than happy to help as it prevents an entire returned game (which is all chaos cards would do ultimately)
Dealt with FF and asmodee a couple of times and they have been great

I'd lay it on thick as well about how it's not up to the usual standard you expect from them etc.
Edited by: "jayhutton10" 14th Jan
17th Jan

I've had shops offer that type of thing. Zatu for a game with a faulty part.
17th Jan

Yep, ultimately if it isn't fit for purpose you are within your rights to return for a replacement/refund. In my experience the shops don't like to cannabilise other stock so I've always found it better to contact publishers direct.
Good if Zatu do a better service though