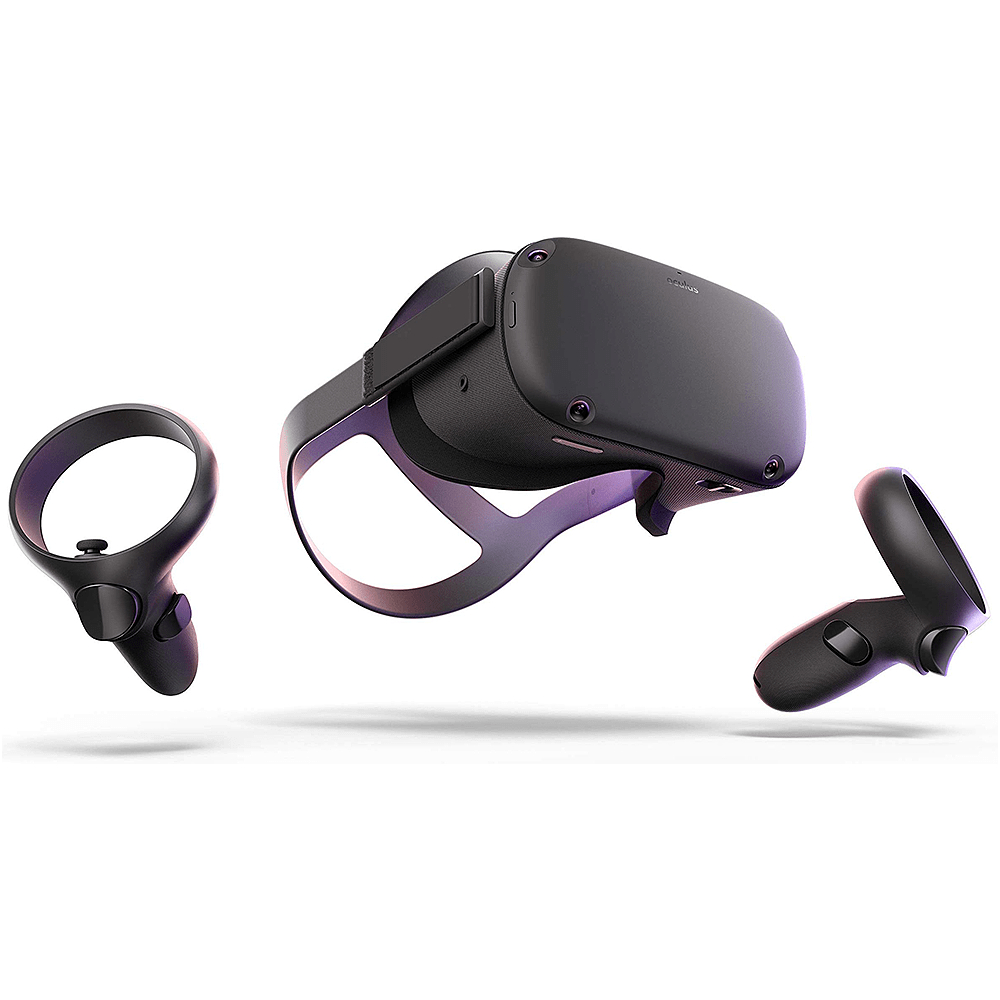 John lewis had this at 1am

Oculus Quest is an all-in-one gaming system for virtual reality. No wires. No PC. Just set up with the Oculus mobile app, and you’re free to explore VR from almost
anywhere. Sensors inside the headset precisely track your movements and instantly translate them into VR, while helping you steer clear of nearby objects. And with
Oculus Touch controllers, your hands are in the game, so you can see your every gesture and feel the power of every impact. Take VR gaming to the next level. And
everywhere else.
PostTweetShare Share with WhatsApp Share with Messenger
Community Updates
GAME DealsGAME discount code
New Comment Subscribe Save for later
45 Comments
9th May
Can't bring myself to pay £100 more for only 64gb more memory. :/
9th May

Just do it ..only live Once and we’ll worth it
9th May

Just do it ..only live Once and we’ll worth it

I’m very glad I got the expanded memory personally. £100 is a bit extortionate, but I think it’s been worth it personally.
9th May

Mate can’t find 64gb till maybe mid June if lucky!! 128gb your travelling with this add movies games and on hols your on!! But yeh I feel ya! Just can’t find 64gb ar all
9th May

So what makes you say this? Have you manage to fill it up? Can you place movies on the memory on it
9th May
Remember you cannot find these oculus quests and if you did it’s on eBay for a 64gb at 500 plus quid so why people are making this cold .. if you can’t easily find this anyway
9th May

When I bought Rift s I thought “what am I doing, this is pricey”.
But after first 5 mins as not tried VR before I was like “wooooowwwww” totally blew my mind, Knowing what I Know now id happily pay what ever the asking price, amazing. Hope this helps 🏻
9th May
They are in stock in Argos I just got one for pickup on Wednesday
9th May

I believe you can place movies on, yes, not that I have done.

I think once you’ve started installing games (and trust me you’ll buy a lot of them and there’s some good free stuff too), add custom elements to games (like Synth Riders) or add things from Sidequest you’ll see that space filling up.
9th May

Couple of possible reasons. First is that it's not a deal. And two, there's a lot of anger against Game for their over priced and forced bundles. Plus poor customer service with regard to refunds.
Edited by: "AnkerMan" 9th May
9th May
Good find for people that need Quest but where is the Rift S?
9th May
never tried VR, really want to but till I actually get a job, can't justify spending my savings esp when I hope to get the new xbox and a 4k TV this year (TV oddly being the cheapest out the lot)
9th May

spot on Rift S was my first VR and its amazing, silly things like Kingspray Graffiti are just brilliant, I have since also got PSVR and in its own way is also impressive, especially for the money.

Oculus 64gb is on sale a couple of times per week on the Oculus store, just search hotukdeals and you'll see how frequently they get in stock
9th May
The games don't take up that much space. Plus you can use Oculus link to connect the Quest to a PC and play Rift and Steam games. So a 64gb one will suffice for a lot of folk.
9th May

Because it was £450 before. It's something you don't need.
Edited by: "mohammed_tasawar" 9th May
9th May

Its good that there's stock, but unfortunately it's 99p over the RRP (the RRP being £499), so it'll get voted cold.

64gb comes in stock every now and again, it's worth signing up to the Stock Informer site and checking Amazon periodically to be first off the mark.

Good find for people that need Quest but where is the Rift S?

Just get a quest. The quest has higher image quality, also now that they’ve added oculus link you can easily plug into a computer with a £15 cable and use like a rift s. I signed up to vive port at a discounted rate from a few weeks back and can play lots of titles without any issues.

I got the 128gb version as they pretty much hold their value. I actually sold a 64Gb oculus go for £150 and a 4 year old HTC Vive for £465 the other day. I have to say the image quality of the oculus quest is far superior to the image quality of the HTC Vive, how things have moved on in a short space of time. However, if you can get the 64Gb quest then go for it. I never used the full 64Gb on my oculus go but then I do use skybox to stream films from a PC which works perfectly.
9th May

This is also not that good, I had one. If you really are into VR get a PC and the valve index its night and day compared to this, but also ££££
9th May

You'll fill the 55GB you get left after the OS in a few weeks if you play alot of games and transfer your own media. Im glad I went for the 128 as I only have 30ish GB left and ive owned it for 3 weeks.
9th May

Mate have you seen any in stock ? Also have you seen the prices on eBay! So I’m placing it up for people who want it and not get ripped by ebay sellers. Hope it helps others
9th May

No you won’t, when I had mine I had loads of games on it and still had 25gb left, the games are barely 1gb
9th May

As I said I've nearly filled a 128 in 3 weeks with games and media such as Blueray Films/Series considering Blueray films are 10GB+ so it can be quite easily done.

Im glad I went for the 128, as I use it alot for remote entertainment, my Index is solely for PCVR.
Edited by: "MrCollective" 9th May
10th May

i been on argos everyday in my area nothing, pus only in areas like maybe scotland durham not towards the south unfortuntely
Edited by: "alfie786" 10th May
10th May

Seems a bit crackers to put Blu-ray films on the quest (unless they are 3D). The horizontal resolution per eye is less than 1080p (I’m not saying you don’t benefit from a Higher resolution, but not up to 4k in 2D). No wonder you have filled your 128gb, but I guess, if that’s what you want to do you will fill the space.

For most users I don’t see that they will fill 64Gb.
10th May

Yes sorry, thought the chap I was replying to would grasp I meant 3D from Blueray, entirely for the Big Screen. The kids love it!
Edited by: "MrCollective" 10th May
10th May
Shows how rubbish game is that it sells out everywhere in minutes but remains in stock on game for days.
10th May

Never had a bad experience with them
Depends on each store and branch most of the time. Always had a good experience myself. Many people don’t know they sell them to be honest .. I didn’t as oculus didn’t have them as a main seller
10th May

Ohh 3D on oculus love to see that oh my

It can be quite an experience
13th May

Night and day in that the index is tethered and this isn't?

Go wireless or go home (probably in an ambulance after tripping over your VR cable).
13th May

You can’t run PCVR games on this wireless, the games on it are run from its mobile processor, it’s front heavy and uncomfortable to wear

the games look ok, but the graphics suck compared to real PCVR games
13th May
I managed to to order one from Argos this morning.
They seem to have got more stock available to pick up.

I stream 95% of the 600+ PCVR games/apps/experiences that I own and have access to via Virtual Desktop wirelessly to my Quest.

It runs them perfectly.
Edited by: "AmFearLiathMòr" 13th May
13th May

We can run pcVR games via the link cable and graphics are not as bad as you think , have you tried it? I was looking at either rift s or this . Index is much better but costly
13th May

yeah I’ve had a quest and tried link, it’s still not great. Maybe I’m just ruined after the index
13th May

Yeh well the index is far better graphically and smooth tracking but the headache of wiring up. Index nearly double or more in fact ! So would you say much of a diff graphically rift vs quest! Miles better or just a little .. you see quest you can go anywhere and play switch on get your guardian set and your good to go anywhere !
13th May
Can't really compare a £400-500 headset with one going for a grand. Of course it's going to be better hardware wise.