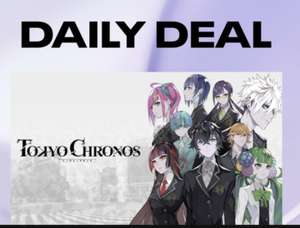 Note: This game takes around 10-15 hours to complete, with new paths that unlock with multiple playthroughs. Don't stop playing after the first credits roll!

TOKYO CHRONOS is the VR game that has multiple-choice decision points as well as more than one ending. It has a long story you've never experienced before with VR.
The game takes place in Shibuya, Tokyo, which has only eight people, including you, the protagonist, Kyosuke Sakurai. Can you solve the mystery and get out of the silent Shibuya?

-Features-
● Drastic advancement of visual novel games with VR
The total gameplay time reaches to 15 hours. The story has multiple-choice decision points as well as more than one ending.

●Moving scenario making your HMD wet with your tears
One review says, "I've purchased several games at the Oculus store, and none of them satisfied me. But TOKYO CHRONOS is no comparison. At first, you're surprised at the beautiful images. But the deep story surpasses it".
PostTweetShare Share with WhatsApp Share with Messenger
Community Updates
2 Comments
Post a comment