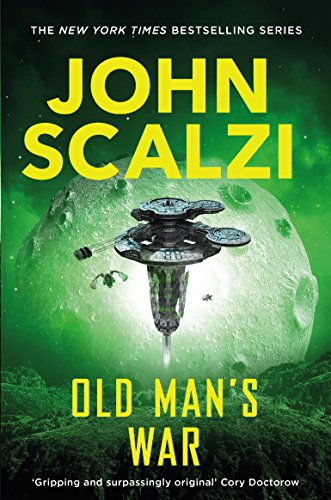 THE UNIVERSE IS A DANGEROUS PLACE

At seventy-five years old, John Perry is after a fresh start - so, naturally, he joins the army. Earth's military machine can transform elderly recruits, restoring their lost youth. But in return, its Colonial Defence Force demands two years of hazardous service in space. This is how Perry finds himself in a new body, crafted from his original DNA. A genetically enhanced and upgraded new body, ready for battle.

But upgrades alone won't keep Perry safe. He'll be fighting for his life on the front line as he defends humanity's colonies from hostile aliens. He'll pay the price for his choices, and he'll discover the universe is even more dangerous than he imagined.
PostTweetShare Share with WhatsApp Share with Messenger
Community Updates
Amazon DealsAmazon discount code
New Comment SubscribeSave for later
12 Comments
5th Jun
Excellent book highly recommended
5th Jun
Ditto. Well worth 99p.
5th Jun
Great author, amazing series.
5th Jun
Have to agree with everyone else, excellent book. I've re-read it numerous times.
5th Jun
yep, like everyone else really enjoyed this.
5th Jun
Bought, cheers op.
5th Jun
Very good audible book too. Which is £2.99 if owning the Kindle copy. So £3.98 to own the Kindle and the Audible copies, excellent.
5th Jun
Thank you
5th Jun
Quite outstanding book. Think Heinlein.
5th Jun
If you like light, jokey sci-fi of the starship troopers variety you will like this. Wore a but thin after the third or fourth book in the series and I gave up.
6th Jun

Yeah, I enjoyed the first, kinda liked the second, really didn't like the third one and stopped there, the concept of going through book 3 again but from a different protagonists viewpoint just didn't seem worth the effort.
10th Jun
Just finished this and really enjoyed it.