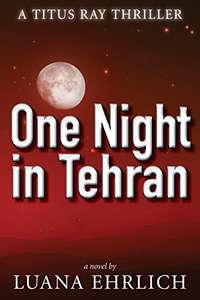 One Night in Tehran: A Titus Ray Thriller Kindle Edition by Luana Ehrlich FREE at Amazon

Wonka Expert (Beta)
0Get deal*Get deal*
158°
One Night in Tehran: A Titus Ray Thriller Kindle Edition by Luana Ehrlich FREE at Amazon
Get*Get deal*
Posted 22nd Sep 2021
CIA operative Titus Ray is searching for answers.
Meanwhile, an assassin is searching for him.
Learning the truth . . .
Veteran CIA officer Titus Ray--on the run from the Iranian secret police--finds shelter with a group of Iranian Christians in Tehran. While urging him to become a believer in Jesus Christ, they manage to smuggle Titus out of Iran to freedom in Turkey.

Dealing with the past . . .
Returning to the States, he discovers his Iranian mission failed because of political infighting within the Agency. After Titus delivers a scathing indictment against the Deputy Director of Operations, he's forced to take a year's medical leave in Oklahoma.

Facing the future . . .
Before leaving Langley, Titus learns he's been targeted by a Hezbollah assassin hired by the Iranians. Now, while trying to figure out what it means to be a follower of Christ, he must decide if the Iranian couple he meets in Norman, Oklahoma has ties to the man who's trying to kill him, and if Nikki Saxon, a local detective with an intriguing past, can be trusted with his secrets.

· Can a man trained to lie and deceive live a life of faith?

· Should he trust the beautiful young detective with his secrets?

· Was the bullet that killed his friend meant for him?

Here's what reviewers are saying about Titus Ray Christian Thrillers:
"I recommend these books for all who enjoy good clean fiction, especially those involving current events in the world. I like the development of the characters and their relationship. I gave it five stars for the great storyline and the characters that seem so real." -Amazon review

"The characters are very well-developed and believable. I enjoyed the way the author described Titus Ray's internal struggles and character flaws creating a very authentic main character. The story was action-packed and one is left wondering how the author could be so knowledgeable of the CIA and the work of their covert operatives." -Amazon review