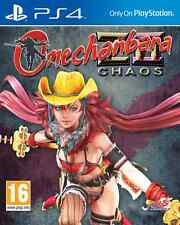 was happy when I paid £10 used from ebay. Now a bit gutted you can buy new for the same price.

Onechanbara Z2: Chaos is the latest iteration in the Onechanbara series featuring the world’s sexiest zombie slayers. With two sets of buxom vampire sisters at the player’s disposal, over a dozen stages of high-octane real-time swordplay await, each characterised by the hordes of zombies infesting the land and the over-the-top methods our heroes employ to kill them. Fight off the invasion in gruesome detail, sending limbs and blood flying every which way through a variety of physical attacks and acrobatic manoeuvres, occasionally transforming into a demon for short bursts of added power and speed at the cost of life energy. Each of the four members of the so-called “bikini zombie squad” has her own unique abilities, and skillful play is rewarded with orbs that can be exchanged for upgraded weapons and outfits.
PostTweetShare Share with WhatsApp Share with Messenger
Community Updates
EBay DealsEBay discount code
New Comment SubscribeSave for later
2 Comments
25th May
Game play looks good too my kind of game - thanks fir sharing! reviews up and down but hey it’s worth a punt for me!
26th May
This is not a good game, but I enjoy every minute of it. Go figure!