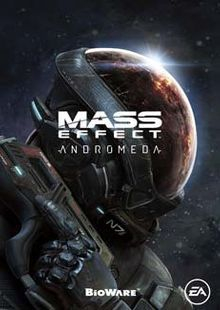 A new chapter of Mass Effect

It's time to return to the Mass Effect universe you love. Meet and recruit new friends and squad mates to aid you in your desperate search for a new home.

Take on a new galaxy

Everything about Andromeda is a mystery waiting to be uncovered. It's up to you and your team to explore this dangerous new region in search of humanity's new home.

A Pathfinder is part explorer, part warrior and all hero. Choose everything from appearance to powers and tech to give your Pathfinder the tools they need.

The battle is just beginning

If you ignore all the negative press its not bad, yet its definately no improvement over the previous 3. With the right Mods though, its a much inproved playthrough.
Edited by: "chaank" 12th Jun
13th Jun

What mods would you recommend?

I remember meeting the first aliens on that planet around release time but burned myself out with other games releasing around then. Honestly quite enjoyed the exploration and what I played.
13th Jun

If your not aware of Nexusmods, they are a great repository of mods and support for many hundreds of games, Register with ''https://www.nexusmods.com/masseffectandromeda'', and take your pick. If you enjoyed ME3, then you might want to check out '' ME3_ALOT'' on Nexusmods, although ME3 doesn't have native controller support, there is a mod for that also. Mods are easy to install, there are countless tutorials on youtube, and they often fix issues developers fail to address, spend an afternoon with some basic tools and you won't look back, mods can give many games a new lease of life.

Features repack:
"The basis is taken by Origin-Rip from Kommunist7304
" Nothing is cut out / Nothing is recoded
"Game version: 1.10
" Game archives are not opened

" Installation time 25 minutes on the HDD (Depends on the computer)

Just to demonstrate what modding can do for a game. Only offered as an example. Support the Developers and Publishers buy buying the games.