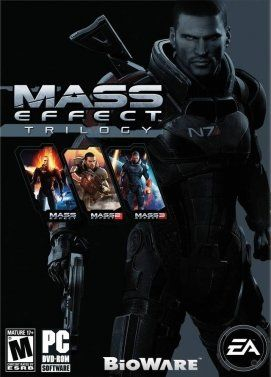 As Commander Shepard, rise to become the galaxy's most elite soldier and lead an all-out war to stop an ancient and ruthless enemy: the Reapers. With over 75 hours of content and more than 300 awards, one of gaming's most acclaimed franchises is available for the first time in a premium foiled box set. Experience all three Mass Effect games.
Heart-pounding action meets gripping interactive storytelling where you decide how your unique story unfolds. Assemble and lead your team aboard the SSV Normandy, the most advanced ship in the galaxy, and travel to distant and unexplored star systems. On your journey, meet a cast of intriguing characters each with their own story to tell. Wield powerful weapons and customize them with upgrades to create new and devastating attacks. All the thrilling action and your decisions culminate into a heroic battle against the greatest threat ever known.


KEY FEATURES:
Over 75 hours of story content, plus Mass Effect 3's critically acclaimed multiplayer mode.
Create and customize your own character with his or her appearance and skills, then play your Commander Shepard through all three Mass Effect games.
Experience an amazingly rich and detailed universe where your decisions have profound consequences on the action and the outcome.
Build a personalized arsenal with powerful weapons complete with their own upgrades and modifications
Unleash devastating abilities and skills as you command and train an elite squad.
Take the war online with class-based, co-operative multiplayer in Mass Effect 3.
PostTweetShare Share with WhatsApp Share with Messenger
Community Updates
Instant Gaming Deals
New Comment Subscribe Save for later
14 Comments
3rd Feb
can't go wrong here for under a fiver!
3rd Feb
No dlc though. Greedy EA.
3rd Feb
Definitely hot, at least for ME1 and possibly 2, although I'm reluctant to give EA any money. I still have not finished 3. 1 and 2 are on Steam
3rd Feb

No dlc though. Greedy EA.

From what I read you can`t buy the DLC but you can install it free by just downloading it straight from EA.
steamcommunity.com/sha…125
3rd Feb
Tried using the site. Login required. Add £0.50 to pay via paypal. If doing so, phone number required.

Not so instant gaming then :/
3rd Feb

Ask yourself, What would Shepard do? He’d pay that space 50p, answer the futurephone and blast off into adventure
3rd Feb
Just want I was after! Thanks OP!
Planning on the replaying the whole trilogy with the HD texture mods
3rd Feb
Che

Next cheapest I could find was at Eneba (using 3rd party seller) at £4.96 total. Use code AKS for 3% off(, ncludes 0.44p `paypal operational fee`(yeaaah!). Don`t know much about them so someone else will have to vouch for the site. Doesn`t seem to need an account(unconfirmed), just Paypal details.
4th Feb

Commander Shepard would probably ask for a discount in exchange for a short advertisement.

Oh, you surely can. However it's much more expensive than the games for which it is for.
gamecrate.com/ori…792
4th Feb

Who told you that? You can buy the dlc. EA even released handy dlc packs for ME1, 2,3, everything included
4th Feb

No one, just assumed since looking at that guide on Steam showing you can install the dlc from EA using the links that they didn`t still sell it separately. I have the ME Trilogy on Origin so I think I have all DLC(?) but I have ME2 on Steam as well for some reason and I was looking there.