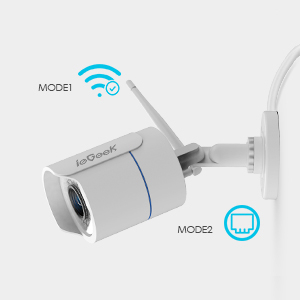 Lots of videos @amazon to show how to install.
PostTweetShare Share with WhatsApp Share with Messenger
Community Updates
Amazon DealsAmazon discount code
If you click through or buy, retailers may pay hotukdeals some money, but this never affects which deals get posted. Find more info in our FAQs and About Us page.
New Comment Subscribe Save for later
18 Comments
17th Nov 2019
Looks like a great deal. Anyone got this already and can recommend ?
17th Nov 2019
Tried it but couldn't get it to work on WiFi, good camera though also app very good. Returned for refund.
17th Nov 2019
I had to return mine also.
17th Nov 2019

Do you have 2.4Ghz or just 5 only? That'd be my initial guess
17th Nov 2019
I am waiting for proper reviews on the Floureon ptv motion detection fully spinning camera loads about from £20 - £45 cheaper ones not Floureon just need to pick one but no reviews I want it above my front door so it will follow people coming into my front garden but these cheap cameras always come with a glitch or something that doesn’t work.
17th Nov 2019
Xiaoshi? Sounds like a cheap Chinese knock-off of Xiaomi
17th Nov 2019

Do you have 2.4Ghz or just 5 only? That'd be my initial guess

Nearly all security cameras will only work on 2,4Ghz, it is possible to configure on a dual band router. You need to go into the menu and disable 5 Ghz and then set the camera up, once this is done just turn on the 5Ghz on the router and job done.
Edited by: "rdann" 17th Nov 2019
17th Nov 2019

This
17th Nov 2019
I’ve got one installed camera is great, the app that runs it is rubbish (CamHi)
Its very intermittent sometimes it works, sometimes it doesn’t.
I’ve also changed my router from BT to plus net, wish I hadn’t but that’s another story.
So I have to take the camera down and sync it to the new router again, which is a pain.
I’m told the best ones are linked to a hard drive, I’d go for that if you could afford it, there was an offer on a YALE system from VERY on here the other day that looked good.
Also purchased a TP-LINK to improve the WiFi hopefully.
17th Nov 2019
I have the black version of this camera. Had it since August and am very happy with it. It uses as 3rd party app CamHi or alternative, plus it will connect via a web browser or monitoring software, NVR or surveillance app on your NAS. i.e. it's a proper IP camera, not one of those that can only be accessed by a dedicated app. Picture quality is decent and it can record continuously to an SD card (not supplied).
17th Nov 2019

One of my cheap IP cameras uses the Camhi app, not had any problem with the app. As it uses the same app, the camera module, if not the whole camera is probably made by the same actual manufacturer.

Hardware on mine is probably different, which would be just as well, because mine is not much cop, as it only achieves a very low actual bitrate and the sensor isn't that great either, but hey it was very cheap and mine also supports Onvif.

Or you can power your old router up and connect to its wifi with your phone and get the camera to search for your new router in the app, or set your new router to use your old ssid and password, or use your BT router with Plusnet.

If you use your BT router, you can flash the Plusnet hub One with openwrt, use it with any isp, or use them as repeaters or mesh nodes, vpn servers etc.

I'd suggest getting CCTV cameras with ONVIF support, so you can access them outside their own apps, and looking at proper CCTV brands like Hikvision, Dahua etc, and if you buy a cheap camera look for one that uses a large, good quality, low light sensor like one of the Sony starvis/starlight sensors and a decent video processor, and don't forget with ONVIF support.
Edited by: "melted" 17th Nov 2019
17th Nov 2019
Have no experience with this specific can but am somewhat familiar with the software, camhi app allows you to log in an view the camera whilst outside of your network, using the i-p address via a browser to log in is buggy, and doesn't allow all features unless using an older version of internet explorer with active X enabled. One small tip I do with all my camera is insert a small silica pack ( the little sachet that comes with new shoes), this will prevent the lense from misting up at some point in the future, this cam has room for stuffing a pack in when inserting the SD card
17th Nov 2019

Wasn’t aware to be honest, might swap it back as the plusnet router is rubbish
17th Nov 2019

Just put in your user name and password on the router settings and it will do the rest itself.
17th Nov 2019
Awesome deal. I have 4 of this installed around house and 24X7 working since more than a year. Absolutely satisfied. Only strong contender to this I would suggest is Yi outdoor but it has usb power cable which was a blocker for me, because it needs bigger hole to be drilled through wall compared to round pin for ieGeek.