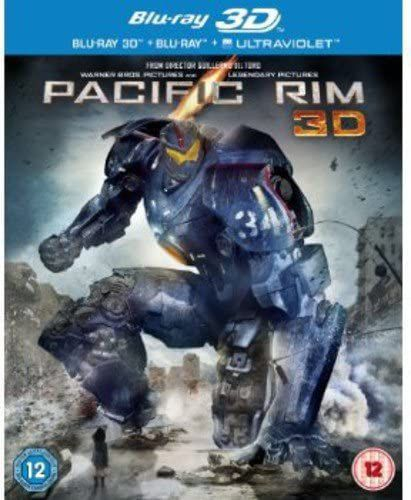 Description
Product Description
Sci-fi action feature directed and co-written by Guillermo del Toro. Gigantic monsters known as Kaiju rise up from the Pacific Ocean and invade Earth. As they rage war, killing millions in the process, the human race defend their planet with the use of special robots called Jaegers which are controlled neurally by their pilots. However, even these magnificent machines have trouble defeating the Kaiju. With their armed forces dwindling, mankind puts its faith in ex-pilot Raleigh Becket (Charlie Hunnam) and trainee Mako Mori (Rinko Kikuchi). Together they must control an early Jaeger model in one last attempt to save Earth.

3D disc
Subtitles: English, Castillian, Danish, Finnish, German, Icelandic, Italian, Norwegian, Swedish
Dubbed: German, Castillian, Italian
Subtitles For The Hearing Impaired: English, German, Italian
Audio Description: English
2D disc
Subtitles: English, Indonesian, Cantonese Chinese, Castillian, Chinese, Danish, Dutch, Finnish, French, Icelandic, Italian, Korean, Norwegian, Swedish, Thai
Dubbed: French, Castillian, Italian, Mandarin Chinese, Thai
Subtitles For The Hearing Impaired: English, Italian
Audio Description: English
From Amazon.co.uk
If the prospect of two-plus hours of 250-foot mechanical men pummeling enormous alien creatures from another dimension is just what you've been waiting for, oh, boy, does Guillermo del Toro have a treat for you. The celebrated director--one might even say visionary--has pulled off the most elaborate B-movie heist ever with this huge-budget special effects extravaganza that revels in catchphrase cliché dialogue, a howlingly obvious script, and the most breathtaking homage to Japanese monster and mecha cinema, manga, and comic tradition. It's all by design, of course, and is a stunning spectacle that also acts as antidote to the bloated, self-important superhero genre and typical bombastic Hollywood tent-pole fare. Pacific Rim has plenty of bloat and bombast, mind you. But it's in the service of a wondrously geeky story that throws all logic and seriousness to the wind, transporting the viewer to a realm of childlike popcorn escapism no matter their age. A dense and breathless prologue dumps us into the near-future global warfare of Kaiju vs. Jaeger. Kaiju are reptilian monstrosities that emerge from deep in the sea through a portal that leads to a world where Kaijus are systematically bred to destroy. They annihilate coastal cities and claim millions of lives before the world's citizens band together to fight back. The humans build fantastic robots called Jaegers (German for fighters) that are able to vanquish the early Kaiju enemies by employing "pilots" who drive the mechanized behemoths in pairs, joining minds in a process known as the Drift. But as the years go by, the war has taken a toll on the humans and the Jaegers, both of whom are nearly defeated. From beginning to end there's really no point in asking questions or trying to calculate details about the outrageous goings-on in the world of Pacific Rim. This is a pure thrill ride ruled by del Toro, the wild visual flair of his artistry and his sheer delight for wallowing in tropes and genre chestnuts leading at full volume. The cast is mainly window dressing for the astounding computer images. The pilots Charlie Hunnam, Max Martini, Rob Kazinsky, and Rinko Kikuchi are merely types. The same goes for Idris Elba, but his glowering presence as the unwavering commander is the best real-life thing about Pacific Rim. A pair of nerdy scientists (Charlie Day and Burn Gorman) add to the plot (simple as it is), though their primary purpose is wacky comic relief. Del Toro favorite and Hellboy himself, Ron Perelman steals his few short scenes as a bootlegger in Kaiju corpses. His character says a lot about the movie's self-effacing attitude. Pacific Rim is deeply in cahoots with itself over the ridiculousness of the story, but also delights in the awesomeness of its invention. The action is both coherent and mind-blowing, which is why most people will find it such a kick. Just like driving a Jaeger, throw your head into the battle and hang on. -- Ted Fry
PostTweetShare Share with WhatsApp Share with Messenger
Community Updates
5 Comments
Post a comment